Michigan hunting and fishing guides could soon be required to obtain a license and meet other requirements under legislation promoted by the state’s largest conservation groups. State lawmakers held the first committee hearing on the bi-partisan bill package on Oct. 28, when representatives from numerous groups testified in favor as a means to police professionals who utilize the state’s natural resources and to collect valuable data.

“It’s been a long journey to get to this committee hearing,” Mike Thorman, legislative liaison for several hound hunting groups, told Woods-N-Water News. “This is overwhelmingly supported by the sportsmen’s groups, from the bird hunters to the trappers.”

The hearing marked a fresh start on the legislation after several failed attempts in previous legislative sessions. Representatives from Michigan United Conservation Clubs, the Michigan Department of Natural Resources, the U.P. Sportsmen’s Alliance, Michigan Trout Unlimited, the Michigan Guides and Outfitters Association, the Michigan Hunting Dog Federation and others testified in favor of the three bill package – House Bills 5358, 5359 and 5360. There was no opposing testimony.

“MUCC believes it’s important to put something in place both for better understanding the total impact of guiding in Michigan, but also to ensure the safety of novice hunters and anglers who utilize guides,” she said. “It’s also an important tool to collect data on fish and wildlife to help manage them.” 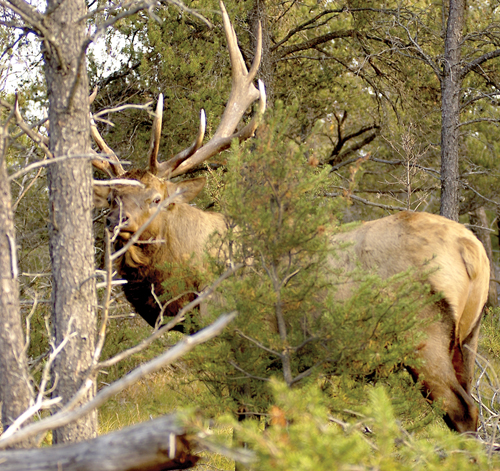 Michael Pedigo, an elk hunting guide and head of Michigan Guides and Outfitters Association, told lawmakers he believes guides need to be held to a higher standard than novice hunters and anglers because they’re often the public’s first contact with the hunting world.

Registration requirements for hunting guides spelled out in HB 5358 include first aid certification, no record of felonies or major wildlife violations, and eligibility for a license for the species targeted. The bill also requires a first aid kit with specific items and outlaw any work on commercial forest lands.

Guides would be required to submit an annual report that includes the counties in which they hunted, species pursued, the number of clients, and the number of animals taken, as well as “any additional information the (Department of Natural Resources) requires regarding the biological characteristics of the game animals harvested.”

HB 5359 spells out similar provisions for inland fishing guides, though it requires monthly rather than annual reports. According to the bill, those reports must include the fish species targeted, the number of clients and hours fished for each trip, the number of fish caught, whether the fish were harvested or released, and the bodies of water utilized by guides.

Fines included for failing to file a report range from $100 to $500. The bills also include fines for providing false information or using commercial forest lands.

The bills include a $150 application fee covering three years, which is waived for licensed charter boat captains. Fishing guides who want to use a boat would also need a $300 “boating access entry pass” for public access under HB 5359.

HB 5360 tasks the Michigan Natural Resources Commission with “regulating the use of commercial hunting guides or sport fishing guides in taking game and fish.”

“If there was ever a need to distribute guiding effort in a particular region or unit … (the NRC) could potentially distribute guiding permits,” Trotter said. “We wanted to make sure someone had the authority if it ever came down to needing that.”

Similar bills introduced in past legislative sessions included requirements for liability insurance and other costly provisions that were stripped out of the new bill package to accommodate smaller guides, Thorman said.

“It started out being an expensive license, expensive insurance, a lot of conditions that had to be met, and we’ve pared it down … because we didn’t realize how many small operators were out there, and we didn’t want to price them out of the system,” Thorman said.

“The charter boat captains already have to do this, and a lot more,” he said. “We’re not trying to create bureaucracy … it’s just the basics – how many people are guiding and the impact they’re having on the resource.”

Michigan Trout Unlimited Executive Director Bryan Burroughs said the legislation is important for wildlife managers to understand the dynamic in the woods and on the water, especially since guides can significantly improve the chance for success.

Burroughs and Trotter noted that the DNR collects very little data on inland waterways, for example, and monthly reports from guides who spend dozens of days a year on the water would be valuable.

“That’s a lot of information on what’s going on,” Burroughs said. “There are rivers that are so busy now … there’s a lot of tension.”

“Overall, in the big picture, we’re setting a low bar to get guides registered, so we know how many there are and in what parts of the state,” Trotter said.

Michael Pedigo, an elk hunting guide and head of Michigan Guides and Outfitters Association, told lawmakers he believes guides need to be held to a higher standard than novice hunters and anglers because they’re often the public’s first contact with the hunting world.

“I believe guides are becoming the face of conservation,” he said. “A lot of people don’t have the time to do their own baits or run their own dogs.”

Pedigo said his motivation behind creating the Michigan Guides and Outfitters Association two years ago was to ensure hunters and anglers connect with reputable, safe and trustworthy guides.

“It gets rid of some of the bad actors,” he said. “I don’t know if there’s a problem, but this would keep it from becoming a problem.”

Norvel Derickson, owner of TC Bass Destination Charters, operates both on inland waterways and the Great Lakes, and he said most of the requirements in the bills are already required for a charter captain’s license.

“I feel like anyone doing it for hire, whether it’s inland or the Great Lakes, should have to do the same thing, to give the public some assurance the guide is responsible,” he said.

Other guides disagree and argue the legislation adds an unnecessary layer of bureaucracy to fix a problem that doesn’t really exist.

Triston Cole, a lifelong guide and former state representative from Antrim County, said he opposed similar legislation during his tenure in Lansing, and not much has changed since.

“The question is: Why do this? It’s entirely unnecessary,” Cole said. “It’s a solution in search of a problem – it’s just more hoops for people to hunt and fish.”

Cole contends the guiding industry in Michigan is largely self-policing, with bad actors quickly called out.

“It’s buyer beware. Why do we need the government to protect us?” he questioned. “That’s where the associations can work to police themselves.”

“It’s just something we don’t need right now. They should be encouraging guides, and this discourages them,” Cole said.

Darren Kamphouse, a popular guide in the Baldwin Bear Management Unit, said he already complies with some of the legislation’s requirements for a permit to guide on federal land, and the Michigan DNR already collects data on each bear harvested during the season.

“Bear numbers, they already know all the numbers, it doesn’t really matter if a guy gets a bear with a guide or by himself,” he said.

“I think it’s a whole lot of extras to not get what they’re wanting to get,” Kamphouse said. “And they’re already understaffed.”

He’s also echoed Cole’s view that bad actors “kind of weed themselves out.”

“With social media, you get a good idea of who’s doing well and who’s not,” he said.