Have you noticed how big bucks go into hiding during the gun season? But there is one important weather condition that brings them from shadowy lairs…fresh snow. For some unknown reason, falling snow seems to calm wary animals, making them curious, anxious to feed or continue breeding chores. Combine snow with a hot doe-in-heat, and you have an epic hunting situation that almost guarantees success. The following anecdote best makes this point.

I’ll never forget the exciting feeling as I raised the Ravin crossbow and set the Scorpion illuminated crosshair on the big 8-point buck’s shoulder. My heart was pounding; I could feel my accelerated pulse in my fingertips as I flicked the safety off. He was big, real big, with broad shoulders and tall tines. Snowflakes danced in the air as I steadied the scope and watched the huge buck chase a little doe through the nearby underbrush and the twang of the Ravin signaled the shot. I saw the 100-grain Spitfire broadhead zip through his chest as he made a mule-like kick and sprinted toward the doe. Then he amazed me, the mortally shot big buck slammed on his brakes, stood watching the doe, got wobbly-legged and fell to the snow-covered earth. He had traveled only 20 yards; apparently, the crossbow did not frighten him, and even though the 3-blade broadhead made a perfect double pass through, he still was concentrating on the hot doe.

I stood over the fallen prize, thanking God for a super hunt as snowflakes danced in the air. I could see hot air steaming from the large hole made by the open-on impact broadhead, and I could smell his rut aroused tarsal glands. The air was cold; the woods were completely silent as I admired the deer’s rack and thought about the ideal conditions leading to the kill.

I spotted him while scouting a cornfield and located an excellent stand location that overlooked major runways heading to the food source. Then the weather turned, dark clouds signaled snow was coming, and I grabbed my crossbow and headed to the hot spot. The wind direction was perfect. In the freshly falling snow, I noticed huge deer tracks that appeared like a big deer chasing a smaller animal. Little time passed on stand when I noticed a small doe prancing through the underbrush, kicking up snow, acting goofy and behind the frolicking doe was the outline of a big buck. Obviously, I was fortunate enough to move into the rut zone of a mature buck chasing a hot doe. The ideal opportunity proved productive, and I had to think about the multitude of Michigan deer hunters that bypass some of the hottest hunting of the year in the late season.

Far too many Michigan hunters head for the comfort of the fireplace when snow begins to fall when they should instead be out hunting. Snow, in many ways, is the ideal weather condition that often stimulates deer activity, draws them from their deep woods hideaways and brings them into the open. The impact is profound with older bucks, deer that are normally almost impossible to spot come out from hiding when there is snow. Perhaps their need to feed intensifies during cold weather—kind of like an old man who needs to eat every couple of hours to stay rejuvenated. Snow gets them on their feet, especially during late afternoon hunts.

A productive time to ambush a dandy buck is when snow is falling, the sunlight is blocked by the low-hanging slate gray clouds, and light conditions quickly dim. To make hunting more challenging, the falling flakes camouflage deer by depositing white stuff on their antlers, face and horizontal back. Deer know they become difficult to spot in the white camouflage, and they sneak through the falling snow like a coyote on the prowl, as if they fully understand the flakes hide the sound of their footsteps and conceal their brown outline.

The ideal snowstorm for hunting is wet snow, the heavy kind that sticks like glue to everything and transforms the outdoor environment into a huge white blanket. Heavy snow tends to make pine boughs bend close to the earth and deer like to play in the drooping branches like kids at a park. Wet snow often falls when the humidity is unbelievably high, and the snow is almost warm. Well, I mean the temperature is hovering near freezing, unlike extreme cold when the snow is crunchy, loud to the step, and the snow powdery. Deer move when the air temperature is slightly above freezing and they like a nice gentle snowfall, not an all-out blizzard with howling wind and horizontal drifting snow. 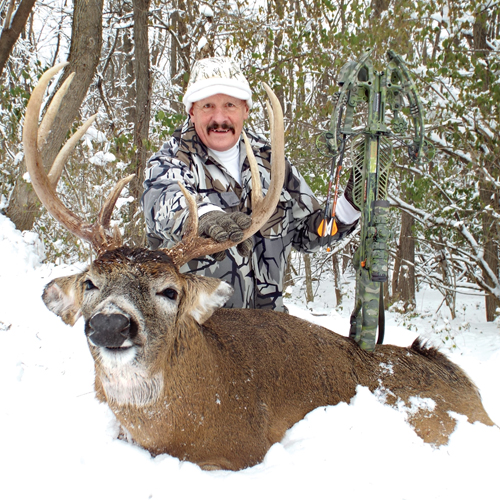 Author proudly displays an adult pig-nosed buck that he located and harvested during snowy conditions. The author uses white goose hunting pullover pants and Predator snow camouflage to conceal his human outline and get kissin’ close to wary bucks. Cover Photo: The key to late-season buck success often hinges on whether or not you can execute the perfect ambush.

If you want to succeed at tagging a late-season buck, I’d suggest watching the weather and coordinating outings when the conditions are ideal. Don’t make the rookie mistake of over-hunting a particular deer and try to have hunts that do not disturb deer in the area. The key to late-season buck success often hinges on whether or not you can execute the perfect ambush. Slipping in and out of a buck’s territory requires stealth, advanced woodsmanship, respect for the animal and its keen instincts. Those who use foxlike hunting strategies and slowly sneak to their blind, stay quiet and move slow as molasses in winter often are rewarded with fresh venison.

The first snow is a magical time to be hunting. Deer love to frolic in the falling flakes and their activity level is very high when snow is falling. Blizzard conditions are another story and heavy snow with howling winds tend to put deer on lockdown. Smart hunters seek the comfort of a heated blind when the weather turns cold. Most deer bed during severe storms but the instant the weather clears, they go on a feeding spree. If Mother Nature dishes out deep snow, deer adjust to the new conditions by establishing a specific feeding pattern. Most bed during the day and resume feeding activities as the sun sets. Late season deer can be easy to pattern and likely holdouts are identified by narrow runways in the drifting snow. Some animals use the same runways day after day and savvy hunters identify good ambush locations with clear shots at passing deer.

Late-season buck hunting revolves around food sources. Southern Michigan hunters have the luxury of agricultural food sources like corn or beans that draw deer from woodlots or thick cover. Good binoculars are a must for late-season scouting. Smart hunters wear snow camouflage and set up near stubble cornfields deer are visiting. The trick to close encounters with wary late-season bucks often hinges on how well you hide from gun shy adult deer. Keep the three Es of successful hunting in mind: entry, execution and exit without being detected.

My favorite food source during the late season is corn. The ideal cornfield is highlighted by plenty of grain on the ground and stalks that are not chopped close to the ground but standing tall. Standing corn will draw deer for miles and is perhaps the favorite crop of savvy hunters who create food plots. Smart late-season hunters know that once snowflakes start falling, deer will travel great distances under the cover of darkness in search of corn. Standing corn is easy for animals to locate because they can see the tall waving plants, and the aroma of succulent corn on the cob carries long distances.

Stand hunting a target animal requires patience and persistence. At times I get on the ground, sneak hunt when snow silences footsteps and take the hunt to the animal by slowly stalking through suspected bedding areas. This tactic requires excellent camouflage, advanced woodsmanship, agility, strength and sneak hunting skills that get you kissin’ close to deer. The trick is to reserve stalk hunting efforts to situations when you spot and stalk animals, when bucks are chasing a doe in cover or when snow conditions make stalking ideal. Few thrills in hunting are more exciting than slowly slipping through falling snowflakes into a big buck’s bedroom and catching him off guard. Deer simply are not expecting to encounter a hunter under such conditions, and your movements are well concealed by the falling snow. The idea is to slip through the underbrush like a fox on the prowl, avoid herky-jerky body movements or breaking of twigs or brush, make frequent stops and survey the surrounding underbrush and have your finger on the safety because a deer can suddenly appear at lightning speed.

Stalking is an ideal method of scouting. Snow highlights bedding locations, size of animals in the area, rutting or feeding activity, frequently used runways and trails leading to and from feeding or bedding locations. Smart hunters identify feeding areas and buck movement patterns from bedding cover to the kitchen table. Wise hunters know it is all about food during the late season and deer prefer to nap close to their supply of easy meals.

Late-season bucks are an interesting challenge and an excellent opportunity to test hunting skills. The trick is to pick your hunting days during relatively calm weather, preferably when temperatures hover above freezing and light winds bring slight rain or dense fog. Bucks love to move when light conditions are low, and humidity is high. Ideal deer conditions are often identified by increased animal activity and cottontail rabbits bouncing about as if there was a full moon.

The late-season is a time of peace, silence in the woods, and uninterrupted hunting pleasure, offering plenty of challenges. Deer are very cautious after gun season and difficult to fool. Some move only during the last few minutes before dark, others are too crafty to be seen and are simply unhuntable. But with a little luck, you will discover a food source, locate a dandy buck, sneak into its lair and catch him preoccupied looking for food.