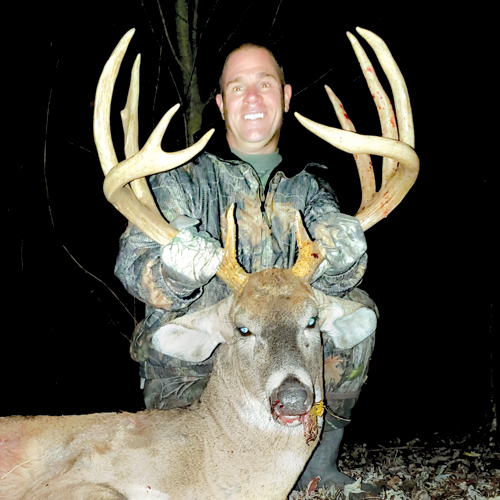 Sassano was hunting a grown-over fallow field that ten years prior was planted in soybeans. Thick brush had overtaken the field, providing ideal security cover for whitetail deer. Mike was positioned high above in an 18-foot ladder stand. Sassano owns a landscape company and a work project took longer than expected, so he got to his stand later than he would like. Settling in around 4 p.m., he knew that it would be a quick hunt.

The vigilant hunter kept a keen eye out in the direction that he expected deer to come from, which was right in front of him, but just before 5:30 p.m., a commotion behind his tree caused him to stand and look behind him. As is typical in areas of high concentrations of acorns, squirrels rustling the leaves sound like approaching deer. When the hunter turned back around, there was a massive tall-tined buck standing just 30 yards away staring a hole through him. Sassano said, “He appeared like a ghost. I wasn’t looking behind me for long, maybe a few seconds, and when I turned back around, I saw him standing in the opening staring at me.”

Mike’s 45 caliber muzzleloader was resting across the front of his tree stand, and he didn’t know if he should quickly grab the gun and take a shot or wait for the buck to look away and give him a chance to grab his weapon undetected.

Sassano said, “After a faceoff that seemed to take forever but which probably only lasted about 15 seconds, the buck lowered his head, giving me a chance to pick up my gun. He then walked slowly away behind some brush. He appeared broadside in an opening. When he walked into my scope, I took the shot. He ran about 50 yards and crashed into a thick stand of autumn olive bushes.

In deer hunting stories, you often hear the term ground shrinkage, which means the deer seems considerably smaller on the ground than what the hunter thought he saw when he took the shot. When Mike walked upon his downed trophy, the buck’s antlers seemed to actually grow. Sassano had shot a true Michigan Monster. This tall racked 10-point sports incredible 13-inch G-2 tines and carries a 19 1/2-inch spread.

Like a lot of modern-day deer hunters, Mike utilizes trail camera surveillance. Still, this trophy buck had successfully avoided having his picture taken by Sassano and was a total surprise. This Berrien County Ghost Buck proves once again that sometimes you just need to put your time in. After all, you never know what might appear!