My dad always told me, “Never doubt your compass…”

During an interview, author John Filson once asked Daniel Boone if he’d ever been lost. Boone is quoted as saying, “I have never been lost, but will admit to being confused for several weeks.”

I have done a considerable amount of hunting alone in wilderness areas. Some were designated wilderness on a map, and others were just plain wild. Like Boone, I’ve been “confused” a few times, but that winter night in Michigan’s U.P. was the first time I ever had to control a rising tide of panic, think things out, and make the right decision.

My day had started well before daylight that morning. I had snowshoed out of camp by the light of my headlamp. In a quarter-mile, I hit the marked trail that summer backpackers use to reach Lake Superior. The actual trail was invisible under 30 inches of snow, but my snowshoe tracks from the previous day made it easy to follow. After trudging up to the height of land, I stopped for a breather and to wait for daylight.

There is some wild country in the northernmost reaches of Michigan’s Upper Penninsula, and I was looking down into a large piece of it. This was big woods country where all the streams run north into Lake Superior. By the end of November, during the last days of our regular deer season, winter has closed its icy grip on that country. It’s a lonely country too. The only boot tracks a man sees in a full day of hunting are likely his own. This far north and nearing the shortest days of winter, the overcast skies allow a deer hunter only about 10 hours of shooting light. It shouldn’t be wasted. 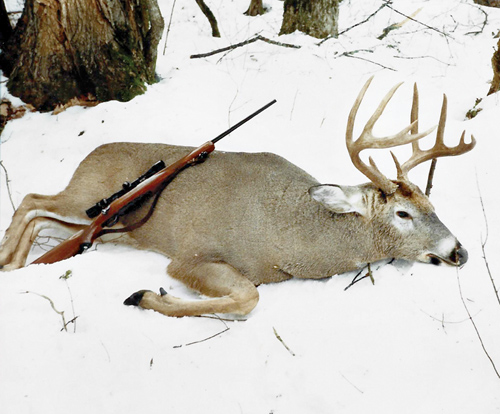 While hunting alone, two days after getting lost, Darryl shot this great Northern Michigan buck. It took him two full days to pack it out of the wilds of the Upper Peninsula.

While I waited for shooting light, tall sugar maple trees above me leaned and groaned with an eerie sound as the cold wind moved them. They seemed to be warning me. Things were different before we had cell phones and handheld GPS units. A topo map and compass were your lifeline. This was big country. It was more than five miles down to Superior, and this snow-covered trail was the only one in the area.

Daylight came slowly that morning, and I was slightly chilled from my exertion, so I began snowshoeing quietly down the trail watching for any sign of deer. There were no deer tracks crossing the trail due to the deep snow. Moisture-laden clouds blown in from the open waters of Lake Superior begin to cool over the land and drop their moisture as lake effect snow. While there were 30 inches of snow at the height of land, there was actually very little snow down at the lakeshore. Undisturbed, the deer tend to move down toward the lake, where there is less snow. I began to see quite a few deer tracks when I reached a level of about 12 inches of snow. This area has very few deer per square mile, so “quite a few” deer tracks is a good thing.

Removing my snowshoes, I stuck them in the snow beside the trail. I wouldn’t need them for the day’s hunt. My plan was to leave the trail, hunt out into a quartering wind for several hours, then swing around and have a quartering wind to hunt back to the trail a mile or two farther down. My self-imposed rule was to be back on the trail a half-hour before dark. Then I could return to my snowshoes by dark for the hike back to camp.

A day spent alone in a wilderness can be very enjoyable. I eased along in a silent, snowy world. When I encountered deer tracks, I followed along with them. Their wanderings were recorded on the snow as if on a clean white page. I froze as I spotted a doe ahead of me. She fed along on the other side of a big, fallen hemlock tree. As she cleared the tree, she gave me a long stare before moving on undisturbed. Wow, those adult northern does are big. I climbed up on the trunk of the fallen tree and leaned back against a big limb, a good place to wait for a big buck that might be following her.

The sky darkened, and snowflakes began to fall. Soon big, soft flakes filled the calm air, all falling straight down. Snow piled up on my shoulders and hat. In a short time, an inch of new snow had fallen. When it stopped snowing, I shook myself off and continued on.

Midday, I brushed the mounded up snow from a log and, thankful for waterproof hunting pants, sat down and ate my sandwich. Then, turning around, so the slight breeze touched my other cheek, I started angling back toward the marked trail.

Moving slowly along, I’d stop and stand awhile where I could see well, then continue on my way. As the afternoon went by, I picked up the pace. I needed to find the trail a half hour before dark to return to my snowshoes. My topo map showed that, this far down, the marked trail followed along a small stream that ran out to Lake Superior. It should be easy to find. The trail wouldn’t have any boot tracks on it, but I couldn’t miss the stream. It had been a good day. I’d seen three deer but no bucks.

The afternoon wore on, and I hadn’t found the trail. Checking my map and compass, I decided to walk hard for 15 minutes. That would certainly get me to the trail. I was relieved to find the stream a few minutes later. A small creek, partly covered by snow, wound along the bottom of a little valley. The valley ran roughly north and south. This had to be the stream. I might have crossed the trail without seeing it. I’d just have to go back and find it before darkness set in.

As I studied the stream, suddenly, I became concerned. The water seemed to be flowing backward. After quickly sliding down the bank, I broke a dead stick off a tree and threw it into the water. All streams here flow north, into Superior. This stream was flowing south. I felt like I had just been kicked in the stomach. My dad always told me, “Never doubt your compass; it’s always right.”

Standing there, staring at my compass, I felt strangely disoriented. A rising tide of panic made me want to do something, anything, and quickly.

I still felt like I might not be to the trail yet. Should I push on? Or did I cross it without seeing it? Should I go back? Calming down, I got ahold of myself. My compass was right. But I was confused. This stream shouldn’t be flowing south. It was getting dark fast and starting to snow again. I fought back the feeling of panic.

Okay, I’m strong enough to get out of this. I had a candy bar in my pocket, half a bottle of drinking water, I could gather enough deadfall wood for a fire, I was dressed for the cold, etc. But…it would be a long, cold, miserable night, and in the morning, I’d still be lost. Spending the night would be my last resort.

I considered crossing the little creek and walking another 10 minutes. Within another quarter mile, I’d certainly find the trail; if it was there. I would be dark by then.

However, that circle I’d made during the day after leaving my snowshoes couldn’t be more than a couple of miles. I could follow my tracks in the snow, even in the dark with my headlamp. I also had a spare flashlight in my pack. I would be late getting into camp, but I’d get there…I’m backtracking!

I started at a fast pace but soon realized that the raspy breathing I was hearing was my own. Since it was already dark, I reasoned that there was no hurry, just a job to be done. Settling into a steady walk, I retraced my steps where I had hunted all day. While hunting, I’d been moving slowly, and snow depth hadn’t been a problem, but walking steadily in a foot of snow wasn’t exactly easy going. It was pitch black dark long before I passed the log where I’d eaten my lunch. At that point, I figured I was halfway. When I finally reached my snowshoes, I strapped them on, climbed over the big hill and walked back to camp.

“You’re pretty late. Get a big buck?” my friend asked.

He raised a lantern to get a look at me. “Get a buck at all? He asked with concern.

The next day I went back to solve the mystery of the creek flowing backward. That little creek flowed south for a quarter-mile before curving around the end of a ridge to meet another stream that flowed north to Lake Superior. That was the stream on my topo map, the one that I was looking for. That problematic little creek wasn’t on my map. Another 10 minutes of walking that evening would have put me on the trail back to camp.