Woodcock help on the way?

A 60-year-old problem for a Michigan game bird could be eased a bit if the Michigan Legislature enacts a recently introduced bill.

In December 2021, Michigan House Bill No. 5631 was introduced by Reps. Cherry, Haadsma, Sneller, Green and Cynthia Johnson. If passed, the bill will authorize the DNR to develop plans to help the American woodcock in the state.

The birds have fallen on hard times, and not just recently. 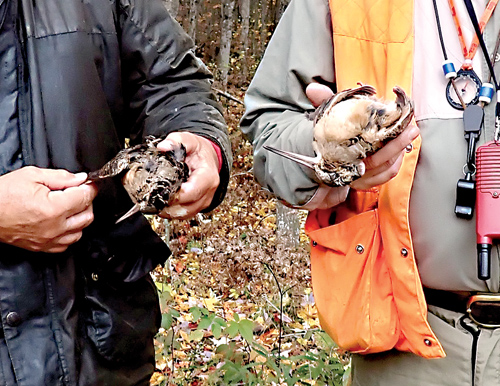 Contrary to what people might think, hunting is not the major cause of population declines of the American woodcock.

This phenomenon extends beyond the concerns of hunters to all wildlife lovers. For, as the website continues, “Wildlife biologists believe that hunting is not what’s causing woodcock numbers to fall. Rather, the problem is an ongoing loss of habitat.

“Much land where woodcock once lived has been taken over by houses, roads, shopping malls, and other urban and suburban development. More important, as young forest and shrubland areas mature to become a forest, they cease being useful to woodcock.”

This is a very simple piece of legislation, just two pages long. It identifies what needs to be done and the groups and agencies with which the DNR should work. That’s all.

The first sentence of the bill clearly states the outcome expected of the DNR: “The department shall create a plan to restore American woodcock (Scolopax minor) populations.”

In its initial form, the bill would require the DNR to develop and/or employ all of the following:

• Interim and final habitat and population goals for American woodcock and associated species for the entire state and each region of the state, state or national forest management unit, state wildlife area, and state game area

• Any other measures necessary to restore American woodcock populations

The “Good Neighbor Authority,” part of the 2014 Farm Bill, allows the USDA Forest Service to enter into agreements with state forestry agencies to do the critical management work to keep forests healthy and productive. So far in Michigan, according to the DNR, state foresters have teamed up such co-management programs with partners in the three national forests — Huron-Manistee, Hiawatha and Ottawa. A large-scale habitat project envisioned in the bill would benefit American woodcock and a variety of species that utilize young successional forest habitat, such as a variety of songbirds, pollinators, Eastern box turtle, and whitetail deer.

In addition to the Forest Service, the proposed bill identifies these other groups with which the DNR shall collaborate:

“It would create a management for woodcock in the state of Michigan, which historically is one of the largest breeding states for woodcock. It would potentially create breeding and nesting habitat as well as resting habitat along the fall migration path.”

The fact that the bill would mandate the DNR establish programs on private as well as public lands might be disconcerting to some people who have no access to private property. Blackwood suggests a look at the big picture might ease their worries.

“The Ruffed Grouse Society and American Woodcock Society believe that large, landscaped habitat work needs to be done across all states. There are opportunities on private lands adjacent to public lands to build more habitat. We are trying to establish the long-term viability of a bird we all cherish. Private land opportunities need to be explored. And remember, woodcock are migratory birds, and they don’t all live within the confines of public lands.”

Michigan citizens interested in seeing this bill approved and the plans put into action can do several things to support it. First, says Blackwood, they should contact any conservation groups they belong to, especially, of course, the Ruffed Grouse and American Woodcock societies.

“Secondly, they should reach out to their state representatives, senators, and voice their support of this proposed legislation.”

As of this writing, the bill has been referred to the House Committee on Natural Resources and Outdoor Recreation. The website for contacting its members is house.mi.gov/Committee/NATU.