It was great being back in Novi for Outdoorama. It was the last sports show I set my displays up before COVID-19 hit two years ago. Our lives have been changed in many ways since, but the 2022 edition of the Outdoorama was a good first step back towards normalcy. Charlie Schmidt, John Brice and many of their Antique Outboard Motor Club Inc. (AOMCI) members set up an impressive display of antique outboard motors, as well as a beautifully restored 1930s boat livery rental rowboat with a 1929 1.5 hp Sea King motor. Kent Lund exhibited his award-winning collection of “Tether Racing Boats,” and Tony Przybylo and I rounded out our 70-ft. display with our “Made in Michigan” collection of reels, rods, and lures. Many old and new friends brought in antique tackle to appraise and photograph. Here are four items that my readers should find interesting.

The first item was a great-looking dealer box of a unique Michigan lure named the Torpedo Ray, a 3 3/4-inch wood lure manufactured by the North American Tackle Company of Royal Oak. An avid Michigan lure collector from Westland, Bill Wazelle, brought them into the show for me to photograph. What made the Torpedo Ray wood baits distinctive were the four outward slanting single hooks protruding out of the wood body, and the fact that it was designed to revolve as it was retrieved. The single hooks were machined with screw points that were screwed into three parts of the body, with the fourth into the tail – an evil-looking lure both dangerous to the fish and the angler. 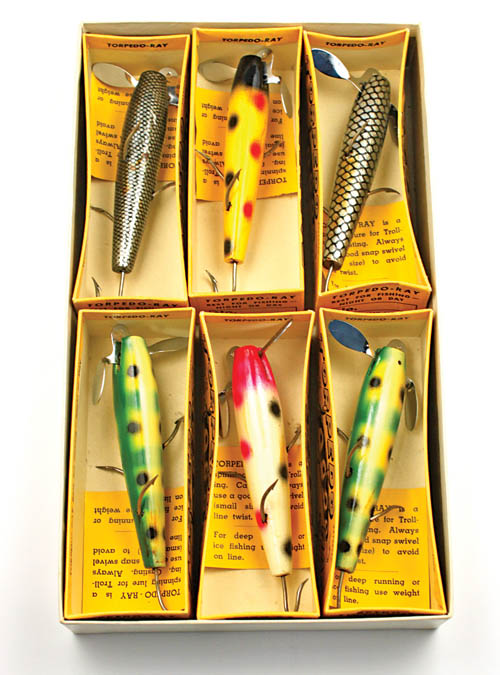 John Irving Bell of Royal Oak applied for his patent on December 1, 1943, and patent #2437803 was granted to him on March 16, 1948. The patent claimed two key improvements: the hooks were attached by embedding them in the lure’s body with the hooks extending at an angle and bent in the direction of the lure’s rotation. The second claim was for the propeller, which was offset “to cause the bait to travel in various directions in a zigzag or sinuous path and therefore give the appearance of a darting minnow.”

The bottom of the box illustrated that the lure had a three-position metal line tie, which was secured by a center pin through the lure’s head that would shift from side to side – left, center or right. The instructions also emphasized that the angler should use a snap swivel when fishing the Torpedo Ray. I have never fished the Torpedo Ray, mainly because I have never found a beat-up example to fish, but I would like to try one to see how it swims. The instructions go on to claim that the hooks were easy to dislodge – “simply push in and twist out [of the fish] with quick reverse or center hook action.” The cardboard box copy also claimed that the Torpedo Ray was “unexcelled for ice fishing,” though I am not sure how it would have been fished vertically through the ice.

John Irving Bell was born in 1900 and grew up in Port Huron. He was married to Iva Irene Valentine in 1921, and the couple had one son, Robert, in 1924. At the time of the patent, the Bell family lived at 1526 Wyandotte, Royal Oak, and he was employed by the Detroit Free Press as a “radio engineer,” apparently at their well-known radio station, WWJ. All the boxes I have seen have a residential Royal Oak address. In his “Made in Michigan Fishing Lures” book, George Richey reported the lure had also been produced in Detroit, though I have never seen a box showing a “Detroit” address.

There are five different colors of the Torpedo Ray: frog; a white version with a red blush face and red and black spots; a yellow model with a black blush face with red and black spots; a black body with small white scales; and a black body with large white scales. All of them are quite rare, and used ones that have been fished show significant paint loss because they apparently were poorly primed when painted.

The second item this month was a wicked looking device made in Detroit apparently in the late 1930s or after the end of WWII that was designed as a “Fish Holding Device” to aid the angler in cleaning his catch. It was named the “Lattner Bros. Fisherman’s-Wife.” I had seen one before, and now I had a chance to inspect it up close. The patent number is stamped on both sides of the handle, so it was easy to look up. Walter Francis Joseph Miron, a machinist who lived in Detroit, applied for his patent on June 16, 1938, and U.S. patent #2298580 was granted to him on October 13, 1942. The patent’s description is almost painful to read – the pointed rod was thrust through the fish’s mouth and into the gullet. Then the angler would squeeze the spring trigger, which would open the clamp. The clamp had serrated teeth, which would grasp the fish’s jaw after the trigger was released. The angler would then start to clean the fish!

Interestingly, the inventor, Walter Miron, went on to patent a second “Fish Holding Device.” It was similar in function but far simpler to manufacture. Miron applied for this new patent on September 13, 1956, and U.S. Patent #2834041 was granted to him on May 13, 1958. However, I have never seen one of the new ones in an old tackle box, so it remains to be seen if it was ever manufactured.

Our third item came from the abandoned Hellion Lure Products facility on Conger Bay Road in Harrison Township sometime in the 1970s. Charlie Schmidt of the Antique Outboard Motor Club Inc. (AOMCI) lived within several miles of the closed lure company’s building, and he decided to check it out. He found unfinished lure bodies scattered, discarded machinery and tools, and various parts and pieces leftover from years of lure manufacturing. He discovered a number of handmade lure prototypes clearly designed for muskie fishing (that I will discuss next month), plus an unusual ice fishing rod and reel handle hanging on some pegboard. It was too remarkable to pass up, and he packed it into a cardboard box along with the prototypes, as well as assorted Hellionfish spoons . . . and some forty years later, Charlie Schmidt brought this remarkable handmade ice fishing reel and rod handle into the Outdoorama for me to photograph.

The total length is 12 1/2 inches and is made out of two well-shaped pieces of varnished pine, a nicely handcrafted metal reel seat, a “reel” made out of an empty Montgomery Wards Hawthorne plastic monofilament spool, and powered by a creatively built metal handle. There is a female metal ferrule embedded in the front of the front section of pine where the angler would insert the ice fishing rod. Unfortunately, the rod was missing, so we can only guess what kind of rod the designer had envisioned. Regardless, Charlie’s find was certainly an inventive use of a discarded plastic spool and fashioned into part of a functional reel and rod handle.

This last item for the month’s article was a lure retriever that Ellen Dvorak was nice enough to alert me to and then send me a sample to photograph. The device was a Lure-Line Saver Company Lure Saver made in Detroit, most likely sometime in the 1950s. The company’s address was 15356 Muirland, Detroit 38, Michigan, a residential area not far from downtown. I have seen many “Made in Michigan” lure retrievers but not this one. It weighed 4 1/2 ounces and measured 6 1/4 inches from the top of the screw eye to the bottom of the chains. It consisted of a 3-inch bar of plated steel, a washer, four lengths of chain and the top screw eye.

The instructions are typical. The angler would tie on a heavy piece of chalk line or something similar to the eye bolt, slip his fishing line through the eye, and then lower it down to where the lure was snagged. Then he would work the lure retriever up and down until the bait was free again or until one of the lure’s hooks snagged on the chain. Then the lure could be pulled up. The paper insert also listed the name of the company’s owner, Roland Mercier and his phone number.

The author would like to thank everyone who stopped by our Outdoorama booth to say “hello” and ask questions. Thanks also to Bill Wazelle for bringing his amazing dealer box of Torpedo Ray lures; Charlie Schmidt for bringing me the unique ice rod and reel handle he found so many years ago; and to Ellen Dvorak for the Lure-Line Saver Company Lure Saver.

The author welcomes questions from readers about tackle of all kinds from the late nineteenth and twentieth centuries. Send your questions to Terry McBurney, 8831 Vergennes, Ada, MI 49301. You can also email your questions to antiquefishing@comcast.net. Include photos, your name and your address.