The trophy whitetail had a 22-point rack with an official CBM gross score of 211 and nets 201 1/8. The state record nontypical muzzleloader buck scored 215 1/8 and was shot in Calhoun County by Tim Tackett in 2007. The number two whitetail in that category scored 204 1/8 and was tagged in Ingham County during 2004 by Dustin Hotchkin, according to the 12th edition of Michigan Big Game Records. 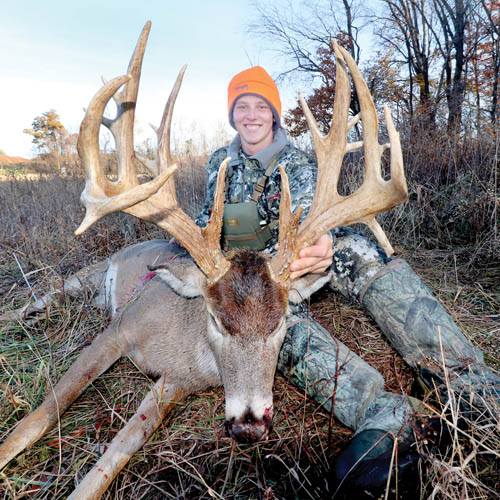 Shembarger scored on the 22-pointer the morning of November 23 as it was following a doe. The Shembarger family, including Gregory’s grandfather (Greg), father (Jeff) and brother (Jeffery), had been monitoring that buck via trail camera photos and video since 2018.

They named the buck Firecracker. That name was a derivative of the name chosen for a previous buck on the property.

“A couple of years before Firecracker was alive, we had a buck we named Explosion because he absolutely exploded in terms of antler growth from one year to the next,” Gregory explained. “When we saw our first picture of Firecracker, I knew he had similar genes to Explosion. Since he was a mini version of the older buck, he got the nickname Firecracker as he was a little Explosion.

Although Firecracker was still on the “Do Not Shoot” list for the Shembargers in 2019, Gregory’s girlfriend almost shot the buck while bowhunting during early November.

“I was sitting with my girlfriend and filming her hunt when we saw Firecracker,” Gregory commented. “She had only killed one buck in her life, so I wasn’t going to make her pass a 150 class whitetail.”

As it turned out, the circumstances prevented Gregory’s girlfriend from shooting the buck then. The deer was out of range for an ethical shot.

“In 2020, Firecracker’s antlers increased in size again. We guessed he would score in the 180s then and had close to 20 points. We decided we would shoot the buck that year, if we got the chance.

“My grandpa saw the buck on opening morning of the 2020 gun season and could have shot him, but half of his rack had been broken off, so he passed him up for that reason. The deer’s left antler was broken off right above the brow tine. We found the buck’s right antler from that year after he lost it and that antler had 11 points.”

The whitetail’s antlers grew even more during 2021 when 5 1/2 years old, sprouting numerous nontypical points. The Shembargers were hoping one of them would be able to shoot the buck last fall.

“I wanted my brother to shoot the deer,” Gregory said. “Back in 2019, I shot a buck in Illinois that had a big nontypical rack with 22 points. The antlers from that deer scored 232.”

Gregory got that buck with his .50 caliber Johnston Muzzleloader, also known as an Ultimate Firearms Muzzleloader, the same rifle he used to shoot the Michigan whitetail. These custom-made muzzleloaders are designed to use magnum handgun primers as an ignition source and powder charges up to 300 grains. These front-loading rifles are accurate at ranges up to 300 yards.

Gregory not only wanted his brother to shoot the Michigan nontypical, he hunted with Jeffery during most of the 2021 firearms deer season, carrying a video camera with him to film the action if his brother shot the deer. They never saw the target buck while hunting together, however.

On November 23, Gregory decided to hunt a different blind than his brother, which was an elevated box blind, and, as luck would have it, that’s when Firecracker made an appearance. The big buck was following a doe. When the whitetail walked into a shooting lane about 145 yards away, Shembarger aimed behind the shoulder and pulled the trigger.

There was so much smoke from the 150 grain charge of Triple 7 powder in the muzzleloader that it obscured Gregory’s view of the deer.

“I felt super good about the shot,” he said. “I texted my brother and told him I got the buck. He didn’t believe me at first.”

Gregory’s brother, father, grandfather and uncle were all involved in recovery of the buck. They found blood right away and the deer didn’t go far after a well-placed shot. The buck had a dressed weight of 195 pounds.

The Berrien County’s nontypical antlers have a 10-point typical frame and 12 nontypical points. There are 11 points on each antler. Both beams are just over 23 inches in length and the inside spread is 17 2/8 inches.

The longest tine is the second one on the left side, which measures 13 5/8 inches in length. The same tine on the right side is 12 inches long. The antler bases are 5 6/8 inches in circumference.

Shembarger said he’s been deer hunting for about 13 years. He shot his first buck in the U.P. near Escanaba when he was seven years old. It was a 5-pointer.