Seeing moose in the U.P. is not easy!

As a DNR fisheries biologist in the U.P., I had to answer public wildlife questions at the DNR office when wildlife biologists were not available. One time the secretaries summoned me to the front public contact counter. There, a man and woman wanted me to direct them to where they could see the “moose herd.” I told them I was not a wildlife biologist, although I understood the moose were typically solitary unless it was a cow with calves. The man was furious and said we, the DNR, had “false advertised” in the former DNR Magazine. He went on to say they had “driven up to the western U.P. from a suburb of Detroit just to watch the moose herd.”

Watching a herd of elk may be possible in the Pigeon River Country near Vanderbilt in the northern Lower Peninsula.

I post many photos of moose taken in Michigan’s Upper Peninsula on Facebook and Michigan nature group sites. Almost every time I do, I hear from one or more frustrated nature enthusiasts, who have tried to see a Michigan moose, and failed.

I am fortunate enough to live near and have a “deer camp” within the core zone of moose in the U.P., so my odds of seeing moose are much greater. I always carry my camera and telephoto lens while traveling around the U.P. on my early morning or evening commutes or on my hunting and fishing trips. Plus, I use trail cameras and camera traps placed in areas that moose frequent.

Since frustrated outdoors enthusiasts keep asking for any tips on how to increase their odds of seeing a Michigan moose, I offer the following: The biggest challenge of seeing a moose in the mainland of the U.P. is there are roughly just over 500 moose (DNR’s most recent Moose Population Survey) on this huge landscape. 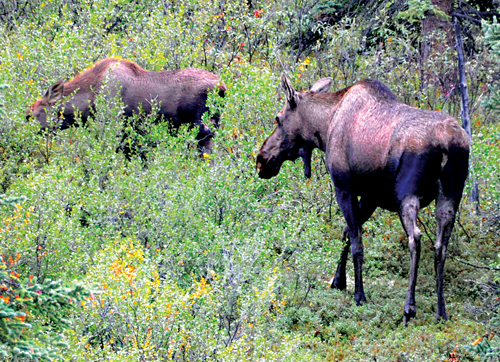 Moose cow and calf along U.S. 141 in North Iron County near the Baraga County line. Occasionally moose are feeding during the day along the state highways in the core of the primary moose habitat zone. Sometimes these moose feeding near the highways cause minor moose traffic jams as excited motorists pull over to watch moose.

In speaking with two other U.P. moose photography colleagues, who also use trail cameras (Brian Baker and Gil Perry), understanding the moose are largely nocturnal, makes them much harder to observe. We have more moose observations during the early morning and evening hours.

Another way to improve your chances of seeing a Michigan moose is to spend more time in their core moose habitat zone, especially during the early morning or evening daylight hours. Essentially that is in southern Baraga, western Marquette and northeast Iron Counties. Another Michigan city claims to be the moose capital of Michigan, although the DNR has determined there are only about 100 moose in the eastern U.P. People who commute on U.S. 41 from Ishpeming to the west, M-95 north of Republic, and U.S. 141 north of Amasa typically see more moose than on any other main roads in the U.P. Of course, there is a vast area of good moose habitat away from these main roads, and sometimes the moose are not near any roads. A detailed county map or county map atlas would be useful to follow some of the gravel back roads through core moose country.

Occasionally U.P. motorists see a traffic stoppage along the main highways in the core moose habitat zone. It can get similar to what is commonly observed in the Western National Parks, where the park rangers refer to it as a bison/elk traffic jam. In our case, a motorist sees a moose along the highway and pulls over, causing the rest of the vehicles traveling on the road to do the same.

Many times people can get excited and use poor judgment. My wife watched a woman jump out of her car with her cell phone and run toward an adult cow moose with calves along the road to get a closer photo. This is bad on two levels. Of course, this often forces the moose to leave the scene, ruining it for everyone else. The other reason is a cow moose with calves is very capable of protecting its offspring and can front kick any threat to them. Moose have reportedly killed individual wolves with their hooves that were attempting to prey on their calves. Of course, it is best to keep your distance, especially from a cow with calves or bull during the rut.

Most of my colleagues and my moose sightings have been in new aspen clear cuts, in wetland or pond areas (summer) where moose spend a lot of time feeding. We have observed that moose are really drawn to eat the new aspen and red maple shoots usually present in a recently completed logging operation. There is quite a bit of logging in the core moose habitat outlined above, so those are good areas to watch. Brian Baker said, “Moose, especially, like new cuttings with aspen and red maple shoots near a pond or other standing water.” Moose are also known to eat rooted aquatic plants in ponds during the summer open water season.

I have also observed over the years that my moose sightings increase during their annual rutting (mating) period. Bulls especially move more during that period, and possibly spend more time moving during the daytime. Their mating season is during September and October. This past rutting season, I saw many more bull moose during October and early November around new clear cuts with lots of new aspen and red maple shoots than I have at other times of the year. Some of my friends that travel a lot between their grouse hunting spots within the core moose zone have had more moose sightings on their back roads travels. Of course, grouse season aligns well with the normal moose mating season.

In the last decade, the general trend of the Michigan moose population has been increasing, although this rate of increase is very slow. The DNR had hoped to have about 1,000 moose in the prime moose habitat by 2000.

Moose were reestablished with a major translocation effort during the mid-1980s, labeled “Moose Lift.” That 1985 effort consisted of capturing 29 moose (10 bulls and 19 cows) in Algonquin Provincial Park in Ontario and trucking them to an area near Michigamme, Michigan, in western Marquette County. In 1987 the original moose transfer was followed by a similar effort moving 30 more moose to the same area near Michigamme.

Unfortunately, the population increase has been much slower than hoped. DNR wildlife researchers said that the natural mortality of moose has limited population growth. According to Dr. Dean
Beyer, the recently retired DNR research biologist overseeing moose population studies in Michigan, the deer parasite brain worm has not been as much of a problem as originally thought to be as long as the moose stay in their core habitat zone.

That zone has lower numbers of whitetail deer due to more extreme winter conditions. So far, DNR moose researchers have not found a single major factor for the higher moose mortality rates. Moose vehicle collisions are still one of the largest factors for moose mortality. Often moose-vehicle collisions are not like the typical deer running across the highway in front of the car. Moose are sometimes known to stand in the road at night as an oncoming vehicle or large truck approaches. The results are very bad for both the moose and especially a smaller vehicle.

It is not easy to see a moose on the mainland of Michigan for all the reasons outlined above. It is a mistake to go on a long vacation to the U.P. with the sole goal of seeing a moose. It is worth making an effort while in the U.P. to visit the core moose zone during your trip. Although patience is required to see a moose in the U.P., it is possible. And, sometimes, a little luck helps.