The Memories Live On…

“Is that so?” LaClair barked as he jerked the wall tent’s flap closed. “Never heard it. You must’ve been dreamin’.”

Ron LaClair passed away on May 8, 2022. Family came first for Ron. He spoke often of his brood: three children, eleven grandchildren and eight great-`grandchildren. He lost his best friend, hunting partner and beloved wife, Nancy, in 2016. 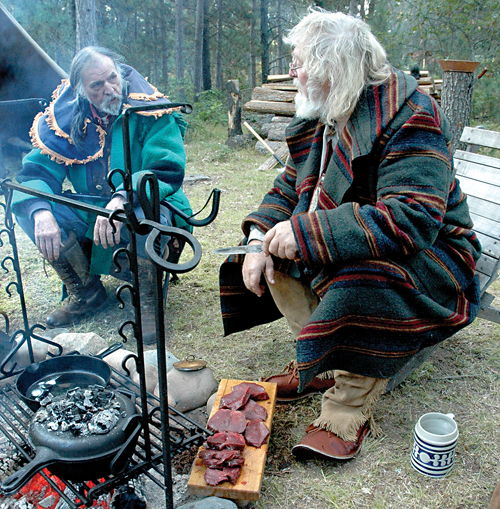 The published remembrance centered on his prowess with a longbow, his traditional archery shop and the Shrew bows he designed and built. Brevity limited the enumeration of his honors, awards and life achievements. Aside from “one of a kind,” feeble words could never capture the mystique that surrounded Ron’s earthly presence.

In traditional black powder hunting jargon, LaClair was a man born “out of season,” two centuries too late. Tall, broad shouldered, rugged and tough with a full beard and sometimes disheveled white hair, he personified the early 19th-century mountain man. LaClair understood the “pull of the woods on a man’s soul,” and that is how the humble woodsmen of Swamp Hollow knew him.

“Squirrel season opens here in Michigan next month,” LaClair posted on the Traditional Muzzleloading Association’s online forum in August, 2009. “I think we talked last year about getting together for a squirrel camp/hunt…whatdaya think…can we make it happen this year?”

Midday, hunters filtered back to camp. Blaker stowed his gear and knelt to rekindle the breakfast fire. Others offered assistance, but Blaker scoffed.

LaClair’s sage advice seemed out of context. Throughout the weekend, the long-time friends who shared a decades old passion for longbows and black powder bickered, sniped and quibbled like two cantankerous woods-runners thrown together by a sadistic twist of frontier fate.

The fire burned down, and LaClair pulled out a deep, cast-iron skillet, nestled it in the red coals and added a large dollop of white grease. By mutual agreement, everyone brought wild game from their freezers.

“Well boys, what we’ve got here is cold-water bluegill fillets and cubed goose breast, cooked in bear fat,” LaClair said. He shook a long thin horn and pulled the plug with his teeth. “This dang sea salt is coarse and hangs up in the horn.”

As the hunters munched and talked, a partridge whirred by the camp. Bertolet saw the fowl land in the ferns. Fowlers and fusils emerged; shot pouches and orange headscarves, too. “Lead on!” Ron urged as Evans and Bertolet followed Radar, Bertolet’s Chesapeake Bay retriever. The grouse never flushed, but the campfire tales of the harrowing chase proved hilarious.

Saturday’s hunt produced three squirrels, all roasted over an open fire. A venison stick, elk jerky, sharp cheddar cheese and home baked bread sufficed for lunch. LaClair returned to Swamp Hollow mid-afternoon, cutting his own hunt short for “the good of the clan.” He slow-cooked a mouth-watering bear roast in the deep skillet.

As darkness fell and the woodsmen gathered. “This bear roast was given to me by Ray Lyon,” Ron stated. “He took that bear with one of my Shrew longbows, so it’s a traditionally killed bear, cooked traditional and eaten in a traditional camp. It doesn’t get better than this.”

“Ron, this roast is unbelievable,” Evans declared as the conversation focused on the forest’s bounty.

“Folks doctor up game to do away with the wild taste,” Ron said. “That’s what we call ‘flavor.’ If it tastes bland, it must be beef.”

Blaker and LaClair’s colorful orations and harrowing tales of moose, caribou, elk, bear, turkeys and white-tailed deer circulated…along with an earthenware jug. After a reflective silence, LaClair asked, “Did I ever tell ya about the Ghost of Armstrong Creek?”

“Tell us, Ron,” Nieman said as the mesmerizing fire illuminated the holler.

“Armstrong Creek is a special place where whitetails get real old…No one ever goes there because it’s haunted, so we’re told…”

An accomplished poet, LaClair’s gruff eloquence reflected a harsh wilderness existence. “The Love of Archery,” “The Legacy,” and “A Boy’s Dream, A Man’s Life,” capture the modern archer’s spirit. And then, with a full moon rising and a coyote yipping in the distance, Ron recited “The Epic Saga of a Mountain Man,” which he personified in uncanny fashion.

The next morning, just after dawn, LaClair eased his tent flap open and whispered, “Good morning,” as Blaker tended a copper coffee pot that bubbled and spit on the fire.

In a deep, baritone voice, Ron sang the chorus to “Oh, What a Beautiful Morning,” as he waltzed from lodge to lodge. At a wedge tent, a younger woodsman groaned. “Imbibe a bit too much, did we?” Ron chided with a wry smile.

Before breakfast LaClair held a wood cutting board. “I’ve got two venison backstraps thawed. One…two…three…” he counted heads. “But with you guys, this will only be hors d’ oeuvres.” His hunting knife slabbed off the steaks.

“These backstraps are from a traditional shot doe, last year, during the late muzzle loading season on our family farm,” he continued as the meat sizzled and bear fat popped. “There were four or five does in the group. This doe steps out. I touched off my new flintlock smoothbore. The ball hit, and she ran off, then dropped about thirty yards away. I stood up, looked through the smoke where she was when I shot. There was another deer down! I filled two tags with one ball, so I named the smoothbore “Two Fer.”

“This is terrible that we have to eat like this,” Blaker quipped.

After breakfast, the woodsmen engaged in a knife and tomahawk throwing competition. Blaker pulled out two hand-forged throwing knives and told when, where and who sold him the set. LaClair objected, “I was with you,” then named a different person and location.

For an hour the two snarled and sniped as they stuck knife and tomahawk. Then as he picked a prize from the blanket, Blaker straightened upright and said with a toothy smile, “I was wrong,” and named a third person and location.

LaClair’s scowl turned into a grin. “Yup, he had that grayish tent up on the hill.”

Treasured pristine moments marked each gathering at Swamp Hollow, but such is the nature of this glorious pastime. Ron LaClair striding off into that wilderness Eden is but one of many. As it was in the 19th century, the measure of a man is the legacy he leaves. Years pass, friends, too…but the memories live on…

Give traditional black powder hunting a try, be safe and may God bless you.