Many of the readers of WNW News are already aware of the positive feelings you get when you are out in the forest; most of it is plain commonsense. For seven and a half million years, in other words, 99.9 percent of our and our ancestors’ time on earth has been spent living in nature. That’s where we belong. And let’s not forget that trees are pouring out tons of oxygen, an essential element for human (and other animal) life.

But discoveries over the past fifty years have accumulated evidence proving that being in a forest environment has actual physical effects on our bodies that go far beyond a mere state of mind. In the 1970s, post-surgery patients in a Pennsylvania hospital were divided into two groups: one set had windows that looked out on natural scenes; the other group had windows that looked onto a brick wall. Guess what? The patients with the natural scenes outside their windows recovered from surgery faster and were released sooner than those facing the brick wall. And they required less powerful pain medications. But this is just the proverbial tip of the iceberg. The Japanese have been at the forefront of research into the power of “forest therapy,” or what they quaintly refer to as “forest bathing,” or washing away the effects and pressures of society and the urban lifestyle.

Studies show that spending time in nature—and even just walking in your garden regularly—is sixty-one percent more effective at fighting depression than standard psychotherapy. Levels of anxiety and stress are measured by the amount of a substance called cortisol in a person’s saliva. The more cortisol, the high the stress level. Participants who regularly spent time in the forest consistently had lower levels of cortisol and adrenaline in their saliva. Other symptoms related to stress levels, like high blood pressure, were also reduced. 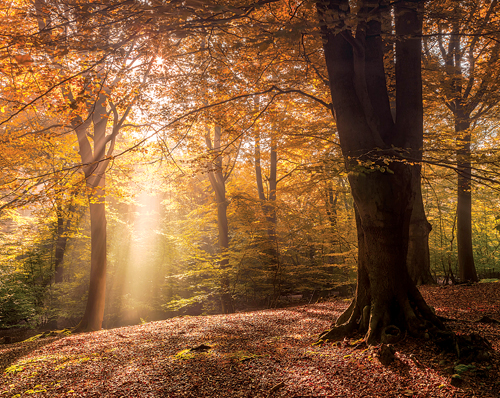 A 2004 study in the American Journal of Public Health found that children who had been professionally diagnosed with ADD had milder symptoms in proportion to the amount of time they spent in a natural environment. It has been suggested that kids with ADD who spend time in nature can see improved cognitive function, attention span and impulse control. It also works for adults.

Thirty to forty percent of men say they sleep less than 6 hours a night. But after a two-hour walk in the forest, sleep time increased by 15% or 54 minutes.

One of the most important weapons in our arsenal to defend against disease is our natural killer (NK) cells, which are white blood cells that our body naturally produces to attack and kill unwanted cells, like cells infected with viruses or tumor cells. They do this using proteins that drill holes in target cell membranes, causing them to die.

In another Japanese study, test subjects who spent three days and two nights in a forest showed a 53.2 percent increase in NK cell activity; a 50 percent increase in the number of NK cells, and substantial increases in the amount of anti-cancer proteins.

How Does it Work?

In addition to producing oxygen, forests give off chemicals called phytoncides, which trees use to communicate with each other and which seem to affect the production of human hormones.

So while there are very real, physically measurable effects of simply spending time walking or even just sitting in a forest (a treestand, for example), more benefits can be derived by paying more attention to our surroundings through focusing our senses: taste, smell, touch, hearing on the natural world around us.

Forest “therapy” has become so popular in some places that so-called experts have cropped up offering to guide people into the forest for sizeable fees. For most of us, this sounds silly, but I suppose for an urban dweller who is intimidated by nature, it might be a necessity. Hunters, on the other hand, are most likely on the alert anyway, and the more focused we are on the natural world, the less time we spend mulling over the events of the day, both personal and political.

So this is one more set of reasons to get outdoors and into the woods. The science points in that direction, but to say “follow the science” sounds like just another stupid and empty catch-phrase. Better to follow our own intuition, which leads us to the same conclusion: it just plain feels better being in the forest.