Usually, when a hunter hears the term funnel, we naturally visualize a valley in the terrain deer follow religiously. But there are many other types of funnels; in Michigan, with its mild terrain, funnels could be found in the form of fence rows, hedge rows, man-made land features, and structures put in place to encourage/or discourage deer to follow certain trails. Deer will almost always follow the path of least resistance. With this in mind, we constantly seek out routes surrounded by security cover to certain food sources or bedding areas on all farms we hunt.

Sometimes we discover more than one funnel on a farm, but that could change yearly, as could other funnels. Our scouting sources are aerial photographs, topographical maps, and boots on the ground during winter scouting. Another good source for information is a couple of hunting programs, Scout look Weather and OnX Maps.

My son Greg and I were fortunate to hunt many states when we had our television program on the Outdoor Channel. These were guided hunts by outfitters who wanted television coverage, so when a funnel was involved, they always put us in a pinch point position. While these hunts were basically successful, we have never had any out-of-state bucks scored, nor have we submitted any of them to any record books. Not so in Michigan, all of our Michigan trophy bucks are scored by CBM for inclusion in our Michigan record books.

However, we have always felt that pinch point hunting would be counter-productive in the long run when dealing with mature bucks; it was just a matter of time before a hunter would be detected, forcing smart bucks to change their travel pattern. When giving seminars on the subject, we constantly cautioned private land owners not to hunt their own pinch points. The best bet is to intercept the deer where the funnel plays out. We treat our funnels like they were buck bedding areas, a place where we never enter, nor would we dare to trim even one branch. Leave your funnels 100% natural.

During one of our winter scouting trips to find a spot to put my granddaughter Alyssa’s blind, we were shocked and pleased at the same time to discover a fantastic funnel that wasn’t on this farm before. The snow was deep, making for tough walking, but we needed to know roughly where the funnel started, where it ended, and why it ended where it did.

We were pleased to note the funnel began as a non-descript trickle on our neighbor’s huge farm. But where it ended on our farm baffled us for a while because the tracks seemed to go in all directions at the endpoint. We walked over to the point of dispersal, after studying everything around us, it started to make sense, and the clues began to fall into place. Most of the tracks continued straight toward the ridge which held many acorn trees, but on top of the ridge was a new food plot planted in the spring consisting of Imperial Whitetail Clover, which we knew was getting hammered. (All other farms we hunt have a variety of Whitetail Institute products planted in our food plots.) The deer that veered to the left led to a great bedding area. The deer that veered to the right would lead them to a water source. We couldn’t wait for the following spring; we were so excited over this potential hot spot. 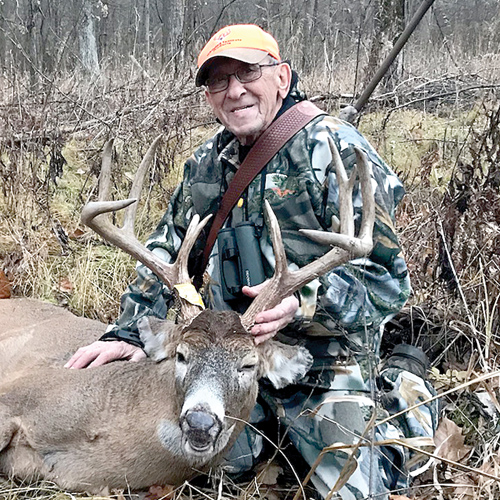 The author hunted his granddaughter’s blind, which was set up where the funnel played out during the muzzleloading season. To up his odds, he set out several sets of mock scrapes using their patented synthetic scents, and he took this trophy buck!

The spot we chose for Alyssa’s Shadow Hunter blind was positioned perfectly, near the point of dispersal, which put Alyssa in crossbow range of any direction the deer chose to travel. The deer would have many months to get used to the structure, eventually viewing the blind as harmless. What’s important to mention is the deer themselves would make that choice of travel without any outside influence. Alyssa is a student at Michigan Tech in the U.P. and had very little free time for a hunt. The rut was in full swing when she finally found time to hunt. The very first evening in the blind, the first buck to show was a trophy buck chasing a doe. Unfortunately, she couldn’t get a shot because they were moving too fast. Her dad was with her because she wasn’t familiar with these new surroundings.

Disappointed, her dad was telling her there were other big bucks around. When lo and behold, here comes the same buck still chasing the doe, or so they initially thought, Greg whispered to Alyssa, it’s a different big buck, get ready, he would try to stop the buck with a grunt. Upon hearing the grunt, the buck momentarily stopped giving Alyssa the shot, and she made good on the second buck.

I heard the good news on the radio. I wasn’t sure where they were when I happened to hit the blood trail, which of course, led me to a very excited father and daughter and now an excited grandfather—what a gorgeous buck.

Alyssa wasn’t a gun hunter yet that year, but hopefully, she will join us this year along with my other granddaughter, Amber, who is a determined huntress who has passed on many smaller bucks, choosing instead to wait for a trophy buck, I like that attitude, let them grow. We bought both girls their own scoped .350s, and each will now hunt on their own.

Greg took a nice 10-point buck bow hunting, leaving me the option to hunt this hot area. I was after a certain buck throughout October and November on a different farm when my cameras convinced me the target buck had become totally nocturnal. I decided to hunt Alyssa’s blind during the muzzleloading season. To up my odds, I set out several sets of mock scrapes using our patented synthetic scents.

Each scrape setup was done in twos in the potential areas the bucks were apt to follow. One scrape held doe in estrus scent, and 10 feet away, the second scrape held a curiosity-type scent for the bucks who opt out of the rut. That way, all of the bases were covered. One hour into the first morning of the hunt, I spotted a big buck leaving the funnel and heading toward the ridge where the scrapes were. I let him pass the blind because I didn’t want him to double back into the funnel or run into the bedding area after the shot.

I jacked up my Swarovski scope to 10x for a better look at his rack and was surprised to see he had double brow tines. The 11-point buck calmly sniffed each scrape, finally turning broadside for the perfect shot. The .450 Legend roared, bringing the buck down after a 40-yard dash. As it turned out, this was the same first buck Alyssa and Greg witnessed chasing a doe.

Although Fred and Greg Abbas, owners of A-Way Hunting Products, are retired from the Sporting show circuit, they are still highly popular and sought after on the seminar circuit speaking on deer and turkey. Especially with church groups, hunt clubs and libraries from around the country. Both are inventors of note and have invented some of the deadliest hunting tactics ever seen, along with hunting products, which are currently licensed to some of the biggest names in the industry. Fred, who lives in Houghton Lake, has the outstanding distinction of being Michigan’s number one ranking trophy hunter with close to 70 trophy bucks in the record books. And now you can see why.

Fred has been sharing these tactics exclusively with the readers of Woods-N-Waters News for many years. He has agreed to be part of the Deer Hunting Seminars at the Woods-N-Water News Outdoor Weekend on Saturday only, September 10, at the Fairgrounds in Imlay City. His seminar topic is, “New and unusual buck tactics proved deadly!” For more information go to www.outdoorweekend.net.