I don’t know if it’s the sense of transition, memories of harvests on our farm and from my garden, the smell of fallen leaves, or, more likely, a combination of all of these things, but autumn is my favorite time of year. With the forest floor and the trees above all shimmering gold and a few unseasonably warm days, autumns can be very fine. When the October moon appears huge and orange-red in the crisp night sky as it rises above the dark horizon, it is called the “Hunter’s Moon.”

Among early Europeans and other peoples living in direct contact with the natural world, including many Native American groups, time was measured by the lunar cycle, and each moon (or month) was given a name referring to the natural events that occurred during that time.

January is the old or wolf moon, when wolves were hungry and appeared near settlements. February is the ice moon, and among the Cherokee, the bony moon—indicating a time of human hunger. March is the windy or storm moon; April the grass, flower, egg or seed moon. May is the milk, hare or planting moon, while June marks the beginning of summer—the rose, strawberry, honey or green corn moon. 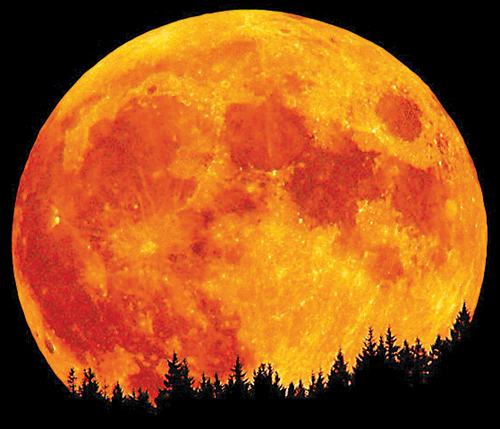 The “Hunter’s Moon;” when the October moon appears huge and orange-red in the crisp night sky as it rises.

July brings the thunder, hay or buck moon; August the corn or sturgeon moon. September’s moon is also called a harvest moon, as well as the nut moon—the time to harvest that valuable food. November is the beaver moon, while December is the cold moon.

This month’s moon, the October moon, deeply hued and large in the evening sky, is the hunter’s moon, or the blood moon. Autumn is hunting season: animals are on the move in October—birds heading south and deer in the rut—that’s clear enough. But why call it the “blood moon?”

Perhaps because of its reddish color when low in the sky, or maybe some ancient association with pagan ritual or witchcraft, which attaches great importance to the moon and its phases (as well as to blood).

Descriptive as they are, most of these moon names have long fallen from use, except for the harvest moon. This is not to say, though, that the moon is any less influential or symbolic today. Certainly, we know that the moon causes ocean tides, and even a small tidal effect (of a few inches or so) on the Great Lakes.

On the other hand, a friend of mine insists she has trouble sleeping during the full moon, and some believe a new project should only be started with the new moon to succeed. People have observed a relationship between mental states (the mentally ill supposedly become agitated) and the full moon, an idea that evolved from early werewolf legends and was still accepted by the British medical establishment in the mid-1800s.

Some folklore about the moon has proven true: “circle around the moon, it will rain or snow soon,” for example. There may be many such rainbow-like circles around the moon: single rings up to 22º in width, and doubles to 44º. They’re caused by the refraction of light through six-sided ice crystals in high-altitude cirrus clouds that normally precede a storm front by one or two days.

And speaking of ice, the most exciting news about the moon today is the discovery of massive amounts of water ice, up to 300 million metric tons of it, in shadowy craters at the moon’s north and south poles. Scientists speculate that this ice was deposited by comets and other ice-bearing bodies as they crashed into the lunar surface. The extremely cold temperatures in deep, shaded craters have kept it intact for millions of years.

This discovery, inferred from a measurement of hydrogen on the moon’s surface, has given rise to a new kind of moon dream, this time among scientists. The presence of water on the moon makes possible a permanent human colony there. Along with solar power, water could support indoor agriculture. Hydrogen from water can be used to make rocket fuel (don’t ask me how), making the moon a possible launching or refueling spot for travel to other planets.

In December 2020, a Chinese lander, Chang’E-5, discovered actual traces of water in the soil where it landed, an area called the “Ocean of Storms.” This water, unlike that inferred by U.S. scientists, was likely formed when the solar wind carrying hydrogen atoms hit oxygen in the moon’s soil and rock.

With the excitement, though, come some sticky issues; for example, who will own the ice on the moon? The U.S. discovered it, but we are party to several UN treaties signed in the late 1950s and early 1960s under the auspices of the Committee on the Peaceful Uses of Outer Space. These treaties were intended to prevent any country from establishing an individual claim in outer space or from using outer space as a point from which to deploy weapons.

The political haggling over the future of the moon may be such that we’ll find ourselves wishing for the days when the moon simply told us when to plant our corn. Actually, I’ve been longing for those days for quite some time.