The big revealing; every Michigan elk hunter starts their story by reflecting on the moment they learned that they won a highly desired elk hunting license. The MDNR holds an annual lottery for elk tags, and bull tags are a once-in-a-lifetime opportunity. The only exception is if a previous bull tag winner wins one of the three Pure Michigan Hunt packages that include a bull elk hunting license. In 2022, there were 260 overall tags; of that number, only 80 were awarded bull tags. 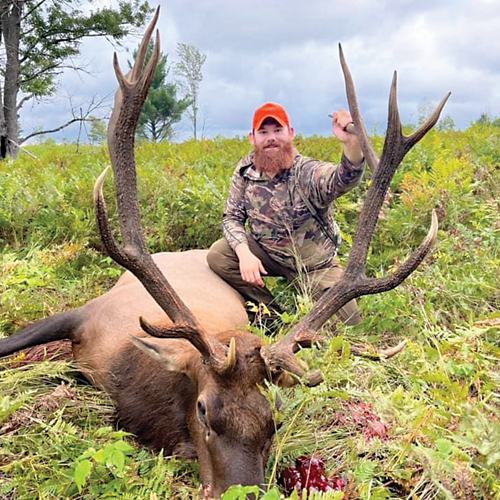 Adam Taylor from Marshall has applied for 17 straight years and finally drew a bull tag. He harvested a dandy heavy racked 8X7 that should score above the 300-inch benchmark.

Adam Taylor from Marshall, Michigan, had applied for 17 straight years. On the day the MDNR announced this year’s winners, Taylor grabbed his phone before getting out of bed and checked his status. When he saw his response read SUCCESSFUL, BULL, he immediately called his father, Lee Taylor. The phone lines buzzed with excitement.

Adam was scheduled to attend a wedding that weekend but immediately canceled those plans and headed north for a scouting trip. That weekend he only saw one cow, but he familiarized himself with the area, spoke with the locals and set out trail cameras.

Overall, Taylor made four scouting trips, set up a half dozen trail cameras, and put thousands of miles on his truck. Adam didn’t get a lot of bulls on camera and said, “The cameras mostly helped me eliminate areas more than anything.”

In addition, Taylor and a couple of his hunting buddies built a hunting trailer/toy hauler. They had started building it in the spring to prepare for a fall hunt in Montana. The trailer proved the perfect “home on wheels” for the DIY hunter and friends as he ventured to northern Michigan.

Adam’s Michigan tag was for the early season and opening day was August 30. He went up a few days early to do some additional scouting. His father Lee, brother Tim, and two good friends, Travis Clark and Chad Gustavson, were accompanying him.

On the eve of opening day, August 29, Adam and his friends found a big bull in an area that “had a lot of fresh sign and was recommended from people living in the area.”

Opening morning, the hunting party began at 4 a.m., as Adam hiked a couple of miles in the dark with friends Travis and Chad while Tim scouted another area and his dad drove remote roads looking for elk.

At first light, the men were positioned in an area to glass for the big bull that they saw the night before. Thirty minutes into the hunt, they spotted him feeding with two smaller bulls and over twenty cows.

The hunters used OnX maps and marked the bull’s location before starting a stalk. This technology also proved to be very helpful in distinguishing public land from private.

They then started an 800-yard stalk, using the terrain to stay hidden from the elk. Taylor said, “The elk were out of sight for over 80% of our stalk. At one point, a pack of coyotes got in between the elk and us and started howling. In hindsight, I think this actually helped us because the elk were heading into dense timber, but the coyotes held them up, giving us time to advance. The elk eventually made it into the timber, and right before they entered, I saw him 315 yards out. I scanned the timber and caught a glance at around 200 yards. He bugled twice and entered an opening, and provided a broadside target. I anchored my 300 WSM against a tree and took a shot. He went about 20 yards, and I took a second shot. Travis saw him drop with the second shot.”

Adam continues, “We tried to mark the spot where he went down, but our initial search came up with nothing, so Travis returned to the spot where I shot and coached us to the bull’s location. I was the first to see antlers sticking up from the ground and found him. I was elated and filled with sheer disbelief at the size and mass of the antlers. Here I was prepared to spend the whole season if necessary to find a great bull, and I had one down in the first couple hours of opening morning. We were beyond excited!”

When you shoot a Michigan elk, you have to contact the MDNR, and they send a biologist to your location to gather information and samples. Fortunately for this DIY hunter, the DNR authorized them to use an access road generally closed to the public to retrieve the massive bull. The DNR employee also informed them of a method in which you use a log to assist in loading the massive beast into the bed of a pickup truck. (I helped load elk using this technique when I tagged along on some elk hunts the prior year, and it works remarkably well.)

Taylor’s bull sports a long, heavy rack with 8 points on the left and 7 points on the right. He estimates that it will score above the 300-inch benchmark. The wapiti had a field dressed weight of 585 pounds.