TROPHY WALLEYES And Where To Find Them!

Trophy walleyes are where you find them. Trophy, in this case, is a relative term because everyone’s personal best will be a different number. A five- or six-pounder could be considered a trophy to the walleye enthusiast just getting started in this game. For the angler who has spent many years chasing ole marble eye, a fish in the 10-pound class is likely what it would take to save space on the trophy room wall.

The angler who is a seasoned veteran at the game of walleye fishing is likely looking for that “once in a lifetime” fish that could be 12, 13, 14 pounds or even bigger. Walleye of this caliber are so rare that an angler could easily spend a lifetime pursuing this lofty goal.

Trophy walleye are where you find them, but a noteworthy fish could turn up at just about any fishery and at any time. However, the angler who is serious about catching big walleye can dramatically improve the odds of catching one by zeroing in on the specific fisheries that have the potential to produce trophy class fish regularly.

Just like trophy whitetail deer hunting destinations, the place or places an angler has a fighting chance of boxing a bruiser walleye changes over time. Once a fishing destination gets a reputation for producing big fish, it doesn’t take long, and fishing pressure takes a toll.

Green Bay is an appendage of Lake Michigan in the Wisconsin waters of the lake. This fishery leads my list of trophy walleye waters for many important reasons.

First, the forage base on Green Bay is diverse and stable, creating an environment where fish can grow fast and large. Big walleye rarely get that way by eating fathead minnows and sticklebacks! To grow big walleye, truly big walleye, requires a protein and fat-rich diet that comes from eating smelt, gizzard shad and most importantly, alewife.

Because Green Bay is connected to Lake Michigan, walleye are treated to an almost unlimited smorgasbord of forage options. The alewife, however, is one of the keys to growing bragging-sized walleye.

Alewives are an invasive species, but it can certainly be argued that without the alewife, the many waters of the Great Lakes would never have become world-class sport fisheries. What makes the alewife such an important forage species boils down to their numbers and also the fact this species is very prone to environmental stress.

Rapid changes in water temperature stress alewife and often lead to massive die-offs of these delicate baitfish. If there is a perfect food for walleye, it would certainly have to be a stressed and dying alewife. Not only is it easy for walleye to catch these baitfish without using a lot of energy, the nutrient value achieved is exceptional. Walleye that feed regularly on alewife tend to be extra thick and grow to exceptional lengths and weights in record time. 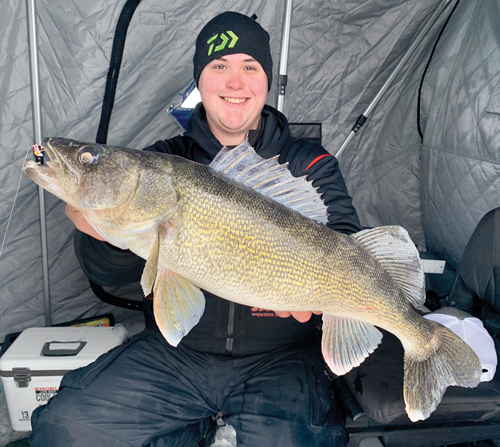 This Lake of the Woods walleye caught by Jake Romanack is typical of what ice fishermen can expect to find if they visit Lake of the Woods in winter. This diverse fishery probably has more walleye than any lake in North America except Lake Erie.

It takes lots of food to grow big walleye, but it also takes lots of time. Green Bay has the food, and the Wisconsin DNR manages this fishery closely to allow adult fish the opportunity to enjoy a long lifespan. At key times of the year when walleye are most vulnerable, Green Bay is managed by allowing only one trophy fish per angler, and that fish must be over 28 inches in length.

Anglers in this region take their walleye fishing seriously and most willingly choose to release all trophy fish. The advent of the replica fish mount makes it possible to have your cake and eat it too. By simply taking some measurements of the fish and a few good photographs, any taxidermist can create a replica mount that is superior to a skin mount and allows the angler to live release his trophy to swim and fight another day.

The best times to visit Green Bay in search of that fish of a lifetime are late fall and early spring, before the annual spawning season. In the fall, trolling crankbaits is the dominant means of catching these fish. In the spring, a mixture of casting jigs and lipless crankbaits produces most of the trophy fish.

The Bay of Quinte is attached to Lake Ontario on the Ontario side of the lake. Like Green Bay, this fishery is fueled by an abundant forage base that includes smelt, gizzard shad, emerald shiners and countless alewife.

The trophy fishery found in the Bay of Quinte has remained stable over the years, largely due to fisheries management regulations that help protect these fish when they are most vulnerable to sport fishing pressure. It’s also important to note that the anglers who travel from all over North America to fish the Bay of Quinte embrace these management goals as the best way to sustain this fishery.

I’ve had the luxury of fishing the Bay of Quinte a few times. On each visit, I’m impressed by how protective anglers are of this fishery. Very few fish are ever kept for the taxidermist; instead, the vast majority of the fish caught by sport anglers are measured, photographed and live released to fight another day.

The anglers who target trophy walleye in the Bay of Quinte remind me of muskie fishermen in that they come prepared not only to catch fish but also to handle those fish with tender loving care, so released fish have every opportunity at survival.

Late fall is the best time to target walleye in the Bay of Quinte. Ice-up in this region generally takes place in late November or early December. The later in the fall an angler visits, the greater the likelihood a monster fish will be caught.

Slow trolling crankbaits using planer boards is overwhelmingly the most popular means of targeting walleye in the Bay of Quinte. Once safe ice arrives, the winter fishery provides a second opportunity for determined anglers to tangle with monster walleye.

Safe ice, in this instance, is not a given. Because there is considerable current flowing through the Bay of Quinte, ice conditions are routinely changing. Some regions of the Bay are so dangerous only the foolhardy would dare to tread on those waters in the winter. The best advice for visiting anglers is to book a local guide who can not only help with pinpointing the best fishing spots, but who can assure the adventure is a safe one.

Lake of the Woods

Next to Lake Erie, no other fishery in North America has as many walleye as Lake of the Woods. This sprawling fishery is located in both Minnesota and Ontario jurisdictions.

Like Green Bay and the Bay of Quinte, Lake of the Woods benefits from a diverse forage base. However, the cisco or lake herring population is the fuel that grows walleye big in Lake of the Woods. Cisco are a pelagic species that roam the open water basins of Lake of the Woods. Adult walleye key on this abundant forage base and literally survive by following the wandering schools of cisco.

Trolling crankbaits in combination with lead core line is one of the most productive ways to target Lake of the Woods walleye. This deep water basin fishery sets up in late summer and lasts deep into the fall.

Once safe ice forms, Lake of the Woods becomes a world-class ice fishing destination. In most years, anglers can enjoy safe ice conditions as early as late November or early December.

What sets Lake of the Woods apart is clearly the number of fish. It’s not uncommon for ice fishermen to land 30, 40 or even 50 fish a day! While it sounds like a fish story, it’s not uncommon for anglers who know the lake to catch upwards of 100 walleye a day.

Even better, a true beast of a walleye can turn up at literally any second. Unlike most ice fisheries that feature a bite window in the morning and evening, Lake of the Woods has enough color in the water that the bite typically stays strong all day long.

Most anglers who visit Lake of the Woods will want to invest in both the Minnesota and Ontario fishing licenses. Many of the most productive areas of the lake encompass both jurisdictions.

Those anglers interested in visiting any world-class trophy walleye destinations will likely need some help in zeroing in on the best fishing waters. Even if you own your own boat, it’s never a bad idea to book with a local guide for at least a few days before striking out on your own.

The Green Bay region features many charter captains, but this is one fishery where an angler fishing from his own boat can routinely succeed. In the spring of the year, much of the best fishing takes place in shallow water near the many tributary streams that flow in Green Bay along the west shoreline.

The town of Oconto is a good, centrally located destination for anglers interested in fishing Green Bay. Fish are routinely found in this region near the Oconto River and also north to the Peshtigo River.

At the Bay of Quinte, I recommend reaching out to Bay of Quinte Charters and Captain Scott Walcott. Not only does Scott offer charters, but he also runs West Lake Willows Resort, which can provide convenient accommodations. The web page https://www.bayofquintecharters.com will provide all the details necessary for a great visit to the Bay of Quinte.