One of Michigan’s particularly picturesque owl species features a fascinating fiesta of fun facts. Here are some terrific and tantalizing tidbits about snowy owls: 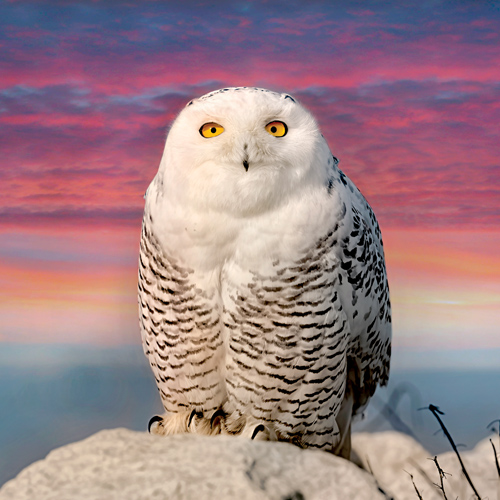 The scientific name of snowy owls is Bubo scandiaca. Bubo (no, that’s not a bubbly drink or a popular male crooner) derives from the Latin meaning “eagle-owl.” Scandiaca recognizes one area, Scandinavia, where this species flourishes. First described by prolific taxonomist Carolus Linnaeus in 1758, snowy owls are known by other common monikers, including polar owls, white owls, and Arctic owls. The Bubo clan is widely distributed globally – boasting 19 species worldwide – and consists of the American horned owls and the Old World eagle-owls.

Snowy owls are not permanent residents of Michigan, and those present are simply winter visitors. They live most of their lives in the Arctic Circle tundra, where they feed heavily on lemming populations and mate. However, some snowies inhabit the Great Lakes State in December or January and usually remain until late winter or early spring. They show up here in larger numbers when an ecological “irruption” occurs. These happen in years when the food supply was particularly plentiful in the tundra, and more owls survive than in typical years. When present, snowies are found in many Michigan counties but are most abundant in the eastern U.P. and along our Great Lakes coastal areas. I have seen these owls in such disparate habitats as sitting in the middle of a frozen lake eating the minnows or discarded fish from ice anglers to sitting smack dab in the middle of the runway at Detroit Metro Airport!

This animal’s association with being wise is strongly reinforced by the fact that a group of owls is called a Parliament! Additionally, in Greek mythology, the owl symbolizes Athena, the Goddess of Wisdom.

Because of their unique habits and habitat requirements, snowy owls are considered to be at the “vulnerable” level regarding their conservation status. Vulnerable is a subcategory of a “Threatened” status on the IUCN scale. I hope this status creates a sense of urgency for humans regarding greater efforts to preserve these resplendent raptors’ habitats!

While most owl species sleep during the day and hunt at night, snowy owls can do quite the opposite and display considerable daytime activeness; in ecological terms, this is known as a ‘diurnal’ species. Therefore, bird watchers and wildlife photographers like us are much obliged to these accommodating animals for this behavior!

Among our state’s most stunning yet simply plumed raptors, snowy owls boast coloration that features largely white feathers. There are, however, varying amounts of dark brown markings on the back, breast, and wings depending on age and gender of the individual. Males are completely or largely white. If the owl displays the aforementioned brown markings and is of adult size, it is likely a female. Immature snowy owls look much like the females but usually have a proportionately higher amount of brown markings, sometimes over most of their bodies. Snowy owls sport piercing golden eyes, talons and beaks that are gunmetal gray in hue. They lack the plumicorns (ear tufts) found in some other Michigan owls, including great-horned and long-eared owls.

Snowy owls have powerful feet heavily covered with feathering, much like fluffy slippers, to provide substantial insulation for frigid climates.

Snowy owls are North America’s largest owl by weight, and the only species that’s longer is the great gray owl, a scarce U.P. species. As with other birds of prey, female snowies are larger and dwarf the males by as much as 20%. They can stretch the measuring tape up to 27 inches and tip the scales at a max of 4.5 pounds. Their wingspans can reach 5.5 feet!

Snowy owls eat a veritable plethora of food items, including lemmings, rabbits and hares, mice, voles, ducks, smaller birds, fish, and even carrion when available. In the Wolverine State, they prefer mice and voles, although I’ve witnessed them successfully hunting for ducks along the Great Lakes shoreline. Their broad, powerful wings help them silently sneak up on or accelerate after prey.

Both sexes of snowies, particularly the males, emit low, powerful, slightly rasping hoots. Typically, these are given two at a time but may include up to six hoots in a row. Remarkably, they can be heard for up to seven miles on the tundra, and owls in nearby territories often answer with their own hoots!

Snowy owls mate during our summer months far north in the Arctic Circle tundra habitats. These ground nesters have clutch sizes larger than most other owls and average 4-8 owlets, but when food is abundant, they may have a dozen young per nest! The female incubates the eggs by resting on them with the warm, featherless brood patch on her abdomen. The owlets are born helpless and are covered with gray fuzz. After hatching, mom usually stays in the nest while dad hunts for food for both the dedicated mother and her increasingly ravenous owlets. Snowies have an unusual behavior of caching food placed in a wreath-like manner around the entire nest. Scientists have recorded up to 80 prey carcasses circling a single nest!

Snowy owls have many adaptations that help them survive in their diverse habitats. These include a neck that can rotate almost 270 degrees, proportionately large eyes (each eye is as large as the owl’s brain), and focused hearing that can detect a mouse rustling on the forest floor from a distance of a football field!

Founded in the United States and sold from 1912-1962, White Owl Cigars were high-quality, machine-made cigars. Named after a famous opera singer of the time, Lillian White, the brand featured on its packaging a fabulous female snowy owl perched on a cigar!

The typical lifespan of a snowy owl is approximately 10 years. The oldest recorded wild snowy was a female, who was at least 23 years, 10 months old when she was recaptured in 2015 during banding operations in Massachusetts!

Once or twice a day, these owls regurgitate and cast off a mass of undigested food items known as, ‘owl pellets.’ These masses contain the fur, feathers, and bones of the bird’s prey. The owl often casts a pellet and goes poop shortly before heading out to hunt. A fantastically fun activity to do with children is to dissect these pellets to determine what type of animals the owl had eaten. Like just about everything else on Mother Earth, owl pellets, with bone identification keys, can be purchased online!

Please use methods of rodent control other than rat poisons. Owls and other birds of prey may consume the mice and die from the ingested poison.

In addition to poisoning, a busy raptor rehabber recently told me that about half of the sick raptors – including many species of owls – that he received this summer sadly perished from West Nile, a viral disease spread by mosquitos.

Harry Potter had a familiar that was a snowy owl named Hedwig. An “oops” is that Hedwig was supposed to be a female, but the birds chosen for the films were all male snowies!

Those are some bountiful blurbs about our fine-feathered friends, the spectacular and stealthy snowy owls. With good fortune, you will happen across one or more in the wonderful woods and waters of the Wolverine State!