That day in December

Pawing through a box of travel notebooks the other day, I found one with 1992 on the cover. Wondering what on earth I did thirty years ago stirred some curiosity; so I refilled the coffee cup, fed a big bolt of cherry to the woodstove and carried the notebook to a favorite chair before the fire.

For decades I’ve kept hunting and fishing journals, but this one was especially intriguing, probably because I hadn’t looked through it for years. I thumbed past entries for grouse hunting and early-season ice fishing and stopped at “A Day in December.” That prompted a flood of memories; let me share why.

A day in December begins with a hot breakfast in our deer camp near Hawks in Presque Isle County and ends with cold feet on the deer hunting stand. First, the big toes go numb, then the balls of the feet, and finally, the heels. Silently, seven Canada geese arrow by above the snow-shrouded pines. Is it too cold for the geese to talk? I wonder how the lead bird keeps eyeballs from freezing at 60 mph.

Even the chickadees flitting around me look cold. Why else are they unable to sit still for more than three seconds?

I’m wondering if I can last a half-hour.

I really have no business being out here hunting with guide-owner Mark Schuler and several other clients at NettieBay Lodge. Christmas is only four days away, and shopping is not finished. Actually, I have yet to begin shopping. To be sure, the mail-order catalogs won’t be bailing me out this year. 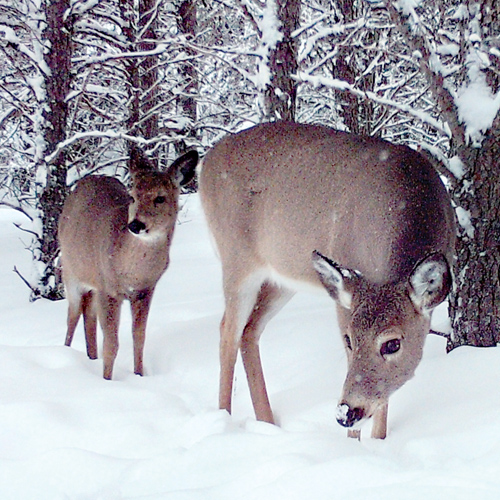 On the drag back to the road, the author thought about how privileged he was to be a hunter and how lucky we are to have a healthy deer herd in Michigan and liberal opportunities to pursue our sport.

The pang of selfishness is an immediate gut-punch. Then, instant justification: I have yet to get my deer (why do we always say “my deer” before it’s down and tagged?). The little buck I missed yesterday morning may still be running around somewhere on the 2,000 acres of hardwoods and Ocqueoc River bottomlands Mark leases. Besides, I have an antlerless permit to fill with the .50-caliber percussion cap muzzleloader I borrowed for this hunt.

But this “missing” business has to stop. Yesterday afternoon I missed a fat doe at 40 yards when I set the trigger with a loud click (I forgot the silent method of holding the trigger while cocking the hammer). The doe vanished in the blue smoke that erupted from the discharge of black powder. Had I shot the deer, the season would be over for me, and I would be tooling down I-75, headed for home and thinking of what to buy my wife for Christmas.

Were that true, though, I would miss everything that was to happen on this day in December.

By ten o’clock, I was back at the tent, a 16- by 32-foot cookshack from the Korean War. Mark had moved in an oil-burning space heater and a propane-fired range and oven. Banked with snow and hay bales, the tent maintained a toasty 65 to 70 degrees. Two picnic tables served as centerpieces, and Mark had built bunkbeds at one end.

(Tip: If you’re ever in the market for an army-surplus tent, choose a dark-colored cook tent because oils and smoke preserve the canvas from the inside out). Downstaters Tim Hite and Ron Miller were already in the tent, drinking coffee and waiting for the others to return so we could organize a deer drive.

Moments later, Mark came spinning along the slick two-track in his old Ford pickup and madly blowing the horn.

Yes, one of the hunters had shot a buck, all right! Spotting antlers above the pickup bed, I leaped to my feet, spilling coffee on my blaze orange pants. Steve Nevius, a muzzleloader hunter from Indiana, had shot a magnificent 11-pointer with wrist-thick antlers at the base.

Taking a big buck this late in the season meant the buck had likely bred many does. I wondered if the deer I missed yesterday was one of them.

After lunch, we organized the drive. Mark, his daughter Corinne, Tim and I pushed through the bare hardwoods and ghostly quiet swamps. One of the stand hunters missed when a knot of deer came charging from the cover. Now, I wasn’t the only one who missed.

Regardless, this was turning out to be quite the day. Even the sun showed up, and the temperature crept above freezing.

By three o’clock, I was back in my stand, waiting for the blue shadows that follow sundown and for deer to appear on the runway before me. My toes began to freeze about the time the sun ducked under storm-cloud cover. They came at 4:50, two large does and a pair of juveniles, bounding along in the snow without noise. This time I silently cocked the set trigger, chose the larger of the does, and touched the pull trigger.

White flags and blue-gray smoke filled the woods. The blood trail was easy to follow in the snow, and minutes later, I found “my deer,” shot dead through the heart. She was a prime animal, a year and a half old, healthy and fat. Thankful now for the cold weather, I attached my antlerless tag before quickly dressing her. Already I was thinking about ways to prepare venison and purposely set aside the heart and liver, delicacies both.

On the drag back to the road, I thought about how privileged I was to be a hunter and how lucky we are to have a healthy deer herd in Michigan and liberal opportunities to pursue our sport.

A day in December ends with a full moon and thousands of stars in the black vault above. Returning to camp, I’ll never forget the sweet smell of roast beaver, which Mark’s wife Jackie had prepared in a rich tomato sauce. A trapper working the property had donated the beaver. Much later, lying in my sleeping bag after lights out, I thought I heard coyotes a long way off. But sleep came before I was sure they were coyotes, not farm dogs howling at the cold moon.

Sometime during the night, I dreamed what to buy my wife for Christmas. I would prowl around in Grayling stores on the drive home.