American or pine marten (more commonly called pine marten) are native to Michigan but essentially disappeared during the extensive original logging period in the state in the late 1800s and early 1900s. By the 1930s, martens were thought to have been extirpated (disappeared). A remnant population persisted in the Huron Mountains in the U.P.

The last marten was observed in the Huron Mountains in 1939. Historical records indicate martens were found in both the Upper and Lower Peninsula. Martens were once found as far south as Allegan County in the L.P. The last confirmed siting of martens was in the L.P. in 1911, near Lewiston, Michigan. Trapping season for martens was reportedly shut down in Michigan in the 1920s, although it was apparently too late (along with habitat loss) to keep martens from disappearing from Michigan.

The first attempt to re-establish marten in Michigan was by the Michigan Department of Conservation in 1955. They were first reintroduced to the Porcupine Mountains Wilderness State Park. That area was picked due to the good marten habitat of mature hemlock and extensive stands of large conifers mixed with hardwoods. A limited number of martens for reintroduction were obtained from Canadian sources.

It became evident that a greater reintroduction effort would be necessary to establish marten in Michigan successfully. After finding a better source to live trap martens in Ontario, a second effort was initiated in 1969, placing the marten in the Hiawatha National Forest. The DNR made follow-up reintroductions at the Huron Mountains (West Marquette County), The McCormick Tract (West Marquette and Baraga Counties), and two locations in north Iron County on the Ottawa National Forest. The source of these martens was Ontario’s Algonquin Provincial Park. Wildlife personnel tried to vary the “brood source” martens to avoid a very limited gene pool.

The most recent effort to expand the marten’s range occurred in the U.P. through a cooperative effort between MDNR and U.S. Forest Service. Martens were live trapped in relatively close locations where they were well established and moved to the Tahquamenon Unit of Hiawatha National Forest. Those martens were obtained from established marten areas in the Hiawatha National Forest. A similar relocation was conducted, moving martens from Houghton County to Keweenaw County. These efforts were made as martens were found to not have expanded their range.

The reintroduction of martens continued in 1985 and 1986 in the northern L.P. Martens were transferred from Ontario Game Preserves to the Pigeon River State Forest, Pier Marquette State Forest, and the Manistee National Forest. Some of the martens were fitted with radio collars to track their movement. The Michigan DNR would have liked to move a much larger number (200) of martens to viable habitat areas in the Northern Lower Penninsula. Unfortunately, they were prevented by public pressure and criticism on the Ontario Ministry of Natural Resources for removing that many martens from Ontario. 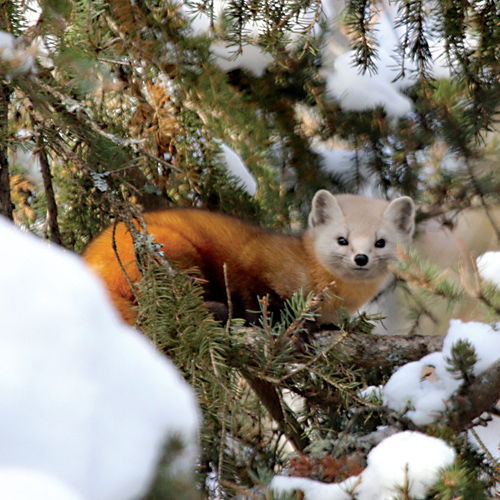 Pine martens are a member of the weasel family that disappeared from Michigan in the 1930s. Pine marten were reintroduced to northern Michigan by the DNR and the U.S. Forest Service. Pine marten are excellent tree climbers and often prey on squirrels in the trees or small rodents under the snow. Pine marten are not known for colonizing new habitats or spreading their established range. This has required DNR and U.S. Forest Service to transfer martens into good habitat to re-establish them over a wider area. Matt Shroderus photo

The goal of any animal re-establishment program is to create a self-sustaining population. Cody Norton, MDNR furbearer specialist, indicated martens are re-established in many prime habitats in the U.P. The DNR started collecting marten population trend data when limited public marten trapping was permitted in 2000.

Norton said, “trend indicators suggest the population has been relatively stable. There have been short periods since 2000 when the population appeared to be declining. Still, indicators returned to typical levels with some changes in season length or bag limit.”

Regarding the current status of marten in the LP, Norton said, “Eighty-five marten were reintroduced to the northern L.P. (Pigeon River Country State Forest, Manistee National Forest, and Pere-Marquette State Forest areas) from Ontario, Canada during 1985-86. The Northern L.P. populations haven’t grown or expanded much since then, so sightings and incidental catches remain rare, and there is no open season in the Northern L.P.” Norton went on to say, “We are currently initiating a new research project to develop abundance estimates for marten. Marten abundance was estimated for the U.P. during 2000-2007 using statistical population reconstruction. During that time, estimated abundance ranged from about 1,200 to 1,700 martens.”

Wildlife studies report the preferred marten habitat is large conifer (hemlock, white pine) and mixed conifer and hardwood forests. Martens are often found in older-growth forests. Norton said “Marten harvest, which likely reflects distribution, is generally greater in the northern half of the U.P. than the southern half. The northern portions of the U.P. are associated with higher snowfall. Martens hunt small mammals in the subnivean zone (beneath the snow) throughout the winter and can stay on top of the snow relatively easily, which means these high snowfall areas serve as good winter habitat and in other areas, have been demonstrated to provide a competitive advantage over fisher where their distributions overlap.”

Martens are an opportunistic predator. Martens eat small rodents like mice, squirrels and occasionally birds and carrion. Martens have been observed during chases in trees with a favorite prey item, red squirrels.

A male marten is slightly larger than a female. Typical males weigh between 1 to 2.9 pounds. Martens are a member of the weasel (mustelid) family. They somewhat resemble their larger relative, the fisher. Marten have a lighter (buff) color throat patch which makes them look different from fishers in addition to their smaller size.

Marten live their lives as solitary animals other than mating or the rearing of young. Wildlife studies have found most litters ranging from 1 to 5, with an average of 3. Breeding season is from June to August. Martens are polygamous.

Martens have been observed to be quite agile and speedy tree climbers. They are quite solitary and mostly nocturnal. They mark scent trails from tree to tree with their strong scent glands. Despite this, they are reported to do most of their hunting on the ground—most hunting occurs at dusk and dawn when prey species are most active. Home range sizes vary considerably with habitat and prey densities. Population densities of 0.6 martens per square mile are common in good habitats.

Norton said, “Martens also use areas along waterways to travel and for young animals to disperse from natal home ranges. A focus of habitat management on state lands is retaining large, contiguous riparian travel corridors for marten to allow this movement of individuals. Additionally, having stands of several cover types (coniferous, deciduous with coniferous understory, etc.) with diverse horizontal structure is important for martens, martens’ prey, and their ability to occupy a niche that differs from fishers. Mast (prey food – acorns, pine cones, seeds etc.) production may also indirectly influence martens abundance, as prey populations fluctuate in response to changes in mast production, and martens respond to changes in prey abundance.

“Throughout much of their range, martens have a significant overlap in prey species and habitat requirements with fishers. Snow depth in winter may facilitate the co-existence of these two species, though. Fishers are heavier and may work harder to move around in deep, powdery snow. Additionally, they do not spend as much time as marten attempting to prey on small mammals in the subnivean (beneath the snow) environment.”

Michigan has a limited short trapping season on marten and a low bag limit. The 2022 Michigan Fur Harvester Digest has the rules and regulations. Norton said, “Marten is a relatively easily-trapped species that can be susceptible to overharvest, which is why we have a shorter season and smaller bag limit than many other furbearing species, as well as mandatory harvest registration and sealing requirements.”

Martens have retained their fur value which maintains a trapping demand for this species.