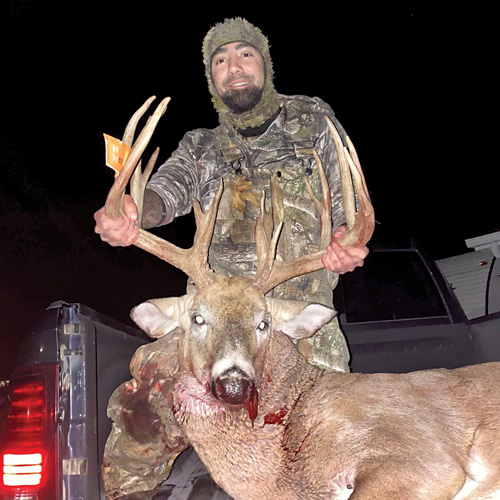 Dominic Simmons with his monster trophy whitetail he took with a crossbow. The 16-point has a 12-inch G2 and an 18 3/8” spread.

Like the year before, thirty-four-year-old Dominic Simmons planned on hunting the Nottawaseppi Huron Band of the Potawatomi (NHBP) land located in southern Calhoun County. The NHBP distribute sections of hunting land on a first come, first served basis and according to Simmons it was the second year in a row that he was the last person to be assigned a parcel to hunt. Therefore, the procrastinating hunter got what everyone else bypassed. His section was a 10-acre grass field that he now had sole permission to hunt for the 2022 season.

Once he secured permission to hunt, Dominic set up trail cameras. During the first week of October, Simmons got photos of a true giant. On October 13, Simmons posted two nighttime photos of the big buck on his personal Facebook page. On the 14th, he posted two nighttime videos and captioned it, “Oh my gawd.” Then on October 23, he posted a very clear video of the giant buck that carried a thick rack with a wall of tall tines on both sides. This time the caption read, “He came back.” The following day, October 25, Dominic posted a photo that displayed the buck’s impressive trophy rack.

After several sits without seeing the buck, Simmons luck changed on October 27, during the morning hunt. Sitting in a tent blind, the sun rose brilliantly in the east and lit up the frost covered grass. Dominic prayed to God, “Please have the big one come in!”

At 8:15 a.m. his prayer was partially answered. At first he saw a doe. Simmons said, “After browsing for a little while, the doe took off running and the big buck ran in, chasing the doe. The doe ran out of range with the big buck following her. The giant buck sprinted into a neighboring cornfield. I sat until noon hoping he would return. At that point I had to leave to take my stepson to an appointment but the whole time I was away from my stand, I kept picturing that big buck in the sunlit, frost covered grass with steam coming out of his nostrils. It was the coolest thing I’ve ever seen while hunting.”

Around 3 p.m., Dominic returned to his blind. Three hours into his sit, two young does came in, running around and being playful. At 6:20 p.m. two big does ran onto the property and kept looking into the cornfield but nothing followed.

Dominic tells the rest of the story. “The four deer browsed in front of me for quite a while. After the sun set, I saw that a fifth deer had joined them and I saw that it was the big buck. I shouldered my crossbow, and when he turned broadside, I took the shot. I heard the thud of the bolt hitting him and his butt dropped to the ground. He quickly regained his feet and took off running. Eventually, I went to the spot where I shot him and found my bolt covered in blood and there was blood sprayed across the grass.”

Simmons had hip surgery in September and was still having trouble walking without the aid of crutches so he called for help before taking up the blood trail. Joining him was his wife, her son and daughter, his brother-in-law and the children’s biological father.

The trail proved to be quite evident with blood covered grass and the buck was found after a short 60 yard walk. He hit the buck in the neck and cut the jugular.

There was no ground shrinkage with this southern Michigan brute. The buck is a main frame 5 x 5, with split brow tines and split G2s, carrying 16 points measuring over an inch in length. The heavy rack sports an inside spread of 18 3/8”. The longest point is the left G2, which reaches the coveted 12” mark.

The Commemorative Bucks of Michigan (CBM) will green score a buck for members and Simmons took the buck to CBM measurer, Mike Seedorff. Mike green-scored the giant buck and it tallied 197 1/8 gross points and netted 192 0/8 in the non-typical category. After a 90 day drying period, the buck can be officially scored and entered into the CBM record book. The current crossbow non-typical state-record buck, scores 213 Boone and Crockett points.

Observant hunters will notice that this buck has a different colored tag than those issued by the Michigan Department of Natural Resources. MDNR Conservation Officer, Jason McCollough confirms this and said, “The NHBP is recognized as a sovereign nation and started issuing their own deer tags. Mr. Simmons is a tribal member hunting tribal properties with a tribal tag.”

Dominic plans on having a half body mount to honor the giant buck.