The first of a new year is when countless Americans do some soul searching. Based on this self-study, many decide it’s time to improve things in their lives. That’s a good thing.

Resolutions to stop smoking, lose weight, drink less and eat healthier rank high on the list of goals most folks have for the coming year. Unfortunately, I don’t smoke, I’m not overweight, I drink sparingly, and when it comes to eating…well, I eat pretty much anything I want.

When it comes time to make New Year’s resolutions, I’ve got to dig a little deeper than the everyday stuff. This year, my resolutions will all focus on hunting and fishing goals. After all, fishing and hunting are how I spend the majority of my time!

Forward viewing sonar products such as Lowrance’s Active Target have changed the face of fish finding sonar forever. While I’ve spent more than a few days getting familiar with this new technology, in 2023, my goal is to find new and more creative ways of using Active Target to improve fishing success on a host of species, including walleye, lake trout, smallmouth bass and crappie.

Currently, I have Active Target mounted to the bow of my boat, using the mounting bracket provided by Lowrance to attach the Active Target transducer to the shaft of my Ghost electric motor looking forward. Rigged in this configuration, I can turn the electric motor to scan for fish using the key fob, the foot control or the Gateway network that ties the Ghost to my HDS Live sonar units.

This system makes it straightforward to hunt for fish. The downside is that once fish are located, positioning the boat often requires pointing the electric motor in a direction that’s not pointing the Active Target transducer in the right direction to monitor the fish.

When fish are located, I’ll be able to use the “anchor mode” on my Ghost electric motor to hold the boat in position. Meanwhile, I can move the Active Target transducer until I pinpoint the exact location of fish, making it easier to deliver accurate casts and monitor fishes’ natural movements.

One of the first things I learned about forward viewing sonar when I mounted it to my electric motor is that fish and the boat constantly move. Controlling the boat’s movement makes it much easier to determine exactly where the fish are located in relation to the boat. This, in turn, makes it easier to make accurate casts and monitor the movements of the fish without having to move the boat in the process.

Several companies produce after-market brackets designed to be used with forward viewing sonar. The one I have my eye on is produced by Fin Gear, a new company producing some unique and high-quality products for fishermen. 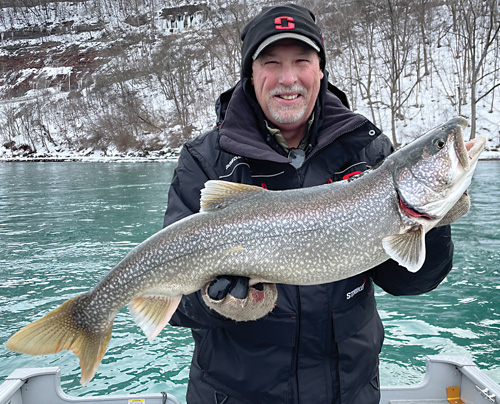 One of the author’s New Year’s resolutions is to locate more places he can jig for lake trout.

One of my favorite fishing adventures focuses on finding deep water lake trout and jigging for these structure-loving fish. The lowly lake trout is often characterized as a poor fighter and lousy fish on the table.

I get a kick out of this assessment because the truth is lake trout are great fighters when you hook and fight them on spinning or baitcasting tackle. Countless times I’ve had a lake trout right to the surface only to watch the fish spot the boat, turn tail and scream out line until the fish is back on the bottom!

Currently, all five of the Great Lakes have abundant lake trout populations. Unfortunately, finding trout on isolated patches of structure suitable for jigging isn’t easy. The spots I’m currently frequenting for lake trout were all found the same way.

I spend hours studying hydrographic maps and the plotter screen on my Lowrance HDS Live unit, studying contour lines that indicate the presence of submerged reefs, shoals and sunken islands deep enough to attract and hold lake trout. In the summer and early fall, lake trout often school on structure, and most of these fish will be found in water at least 80-120 feet deep.

On Lowrance units and some other sonar brands, it’s possible to have specific depth ranges shaded to make it easier to spot isolated humps and bumps that could potentially be your next lake trout jigging hot spot.

Finding small structures that top out in 80-120 feet of water, that also are surrounded by deeper water, is the key to locating places lake trout are likely to be. My strategy involves pinpointing several of these “spots on the spot” within relatively close proximity to one another. This allows me to set up a milk run and check several perspective places within a few hours on the water.

My experience suggests that some spots attract and hold fish consistently, and others hold fish only occasionally. The only way to confirm if fish are present in catchable numbers is to make the run and spend some time graphing to pinpoint fish.

In 2023 I’m determined to spend the time on and off the water necessary to find a few more consistently productive lake trout jigging spots. Finding isolated lake trout jigging structures is a bit like looking for a needle in a haystack, but when you locate these spots, jigging success is just about guaranteed. Even better, spots that hold fish this year are almost certain to hold fish in subsequent years.

Over the years, I’ve enjoyed many fishing trips that feature off-the-beaten-path destinations. Chasing offshore lakers at Stannard Rock and Isle Royale in Lake Superior or monster brook trout and walleye at Lake Nipigon are a few good examples of places most anglers dream about but never experience.

In 2023 I’m determined to find new places to seek out fishing adventures the masses haven’t ruined. If that means running offshore further than the masses or traveling to the most extreme fisheries, I’m up for the challenge.

Big pike, big walleye, big brook trout and big lake trout are high on my list of species tailor-made for adventure fishing destinations. In 2023 it might require burning a lot more fuel, but I’m determined to ferret out fishing destinations that are worth the expense.

For some time now, my family and I have enjoyed deer hunting a small northern Michigan property that has a high density of whitetail deer. It’s a blessing to have lots of deer, but it’s also a problem when those deer eat everything in sight literally.

Our property features agricultural waste grain and several small food plots, but unfortunately, these food resources are picked over well before hunting season begins. While offering these sacrificial food plots has helped us grow bigger bucks, it hasn’t helped us harvest as many as we would like.

For 2023 my goal is to maximize the yield of my food plots by doing soil tests and adding the best possible mix of fertilizer and lime. In addition, the plan is to install solar-powered electric fences around key food plots to keep deer out until the food plots mature. This step will maximize the amount and type of food we can produce in small areas and hopefully keep deer visiting our food plots routinely during the archery and firearm hunting seasons.

Lastly, another goal is to add strategically placed strips of perennial switch grass in potential bedding areas. Adding more bedding habitat will hopefully keep deer on our land more often and mitigate the problem of deer traveling to the neighboring properties to find suitable bedding and loafing habitat.

Finding quality wing shooting opportunities in Michigan is challenging to say the least. In my lifetime, I’ve watched as pheasant, woodcock and duck populations have taken a nose dive. Despite countless hours spent scouting, quality bird hunts are getting tougher and tougher to find.

In 2023 I plan to take advantage of opportunities to target crows and pigeon populations that are not only abundant but these birds also eat the same waste grains that are critically important to supporting important game species such as deer, Canada geese, ducks and grouse.

Over-abundant crows are also a problem because they destroy countless songbirds’ nests and ground-nesting game birds such as wild turkeys, ducks, ruffed grouse, pheasants and woodcock.

Hunting crows and pigeons will help control their numbers, provide my labs more work, keep them in good physical shape, and refine their hunting skills for targeting waterfowl in September, October, November and December.

It seems everyone is all about making New Year’s resolutions. I think it’s good to make a plan and stick to it. I plan to make 2023 one of my best years for hunting and fishing adventures.