WHEN THUNDER ROARS! THE MOST UNDERRATED SEVERE WEATHER HAZARD…

The sultry days of summer have faded but the season of powerful electrical storms is not over in our Great Lakes State. Nature’s way does not always follow the calendar and those with boating, camping hiking, fishing or hunting plans in our southern states should bear in mind the combination of heat, humidity and sea breezes, especially on both the Gulf and Atlantic coasts of the Florida Peninsula create the perfect breeding ground for powerful and frequent thunderstorms.
The National Oceanic and Atmospheric Administration (NOAA) writes, “Lightning is one of the most underrated severe weather hazards, yet ranks as one of the top weather killers in the United States. Lightning strikes in America kill about 50 people and injure hundreds of others each year.” 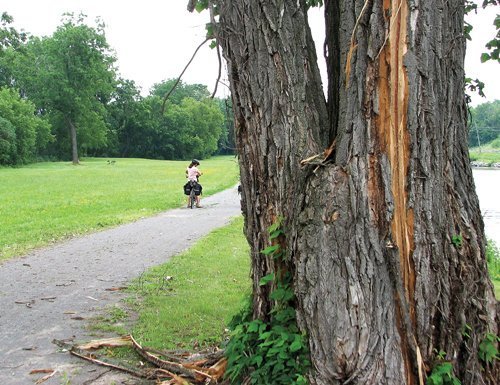 The Wilderness Medical Society states that there are approximately 25 million cloud to ground flashes per year in the United States. The author cycling the Buffalo to Rochester section of The Erie Canalway Trail, lightning out of the ‘blue’ hit a tree a couple hundred yards away. Author photos

I’ve had two close encounters with lightning, one when I foolishly paddled over to Apple Island in the middle of Oakland County’s Orchard Lake just as a late summer storm brewed. I knew a storm was brewing but paddled on anyway. That was about three decades ago and for a terrifying 30 minutes I hunkered down in small open island pavilion (a dangerous location) as lightning sliced the sky to the roar of near constant thunder.
I’m a bit wiser now and am always amazed when I see hikers, hunters, trail runners and other adventurers that tote hand guns, bear spray, emergency signal beacons and all sorts of high tech gadgets to stay safe “in the wilds” or on a trail, but think absolutely nothing about crossing over a rocky ridge line or wide open meadows while thunder roars. And then there are friends of mine that repeat common myths about lightning’s behavior. As an emergency room paramedic with a strong background in wilderness medicine, combined with my passion for outdoor adventure, I will share a bit of myth busting for them– and perhaps for you.

MYTH…
The storm is already passed, the thunder is ‘fading’.

Fact: “Bolts from the blue” have been documented 15 miles from a thunderstorm. If you are outside and thunder can be heard you are not safe. NOAA advises to stay inside or in the safest place you can for at least 30 minutes after the last clearly audible thunder clap. And that brings me to my second close call encounter.
This one occurred about 20 years ago while cycling with a friend on the Buffalo to Rochester section of The Erie Canalway Trail, a cycling destination following one of the world’s most famous man-made waterways that spans New York State between Albany and Buffalo. We were about 35 miles into our journey and could clearly hear thunder increasing in intensity, but the sky was blue so we peddled on. A sudden deafening thunderclap startled us. We turned and saw where a “bolt from the blue” shattered the side of a trailside tree less than one fourth of a mile behind us and scattered bark across the trail. We were just a few minutes peddling from the next town and that quickly became our long indoor lunch stop.

Fact: There is not a hint of truth to this old saying. NOAA states that the Empire State Building gets hit an average of 23 times a year. And many homes and commercial buildings have lightning rods, including my hilltop home. I have a friend that tells me he doesn’t have time to worry about storms and just prays to stay safe when hiking in the mountains. I showed him a photo I took in Santa Fe of a cathedral with a statue of the Virgin Mary, topped with a lightning rod and asked why a church would need that protection if prayers were sufficient. He did not have much to say.

MYTH…
The rubber tires on a car protect you from lightning.

Fact: No they don’t. It’s the metal roof and metal sides that protect you if a bolt hits the car. Obviously if you are in a convertible, or on a motorcycle, ATV, or bicycle, you have no protection from lightning.
The National Institute of Lightning Safety has some eye-opening science based comments on cars and lightning “Electrically speaking, at lightning’s higher frequencies, currents are carried mostly on the outside of conducting objects. A thick copper wire or a hollow-wall metal pipe will carry most of the lightning on outer surfaces. This phenomenon is called “skin effect.” The same holds true for lightning when it strikes metal vehicles: the outer surface carries most of the electricity. But, consistent with lightning’s capricious nature, situations alter results. If the car is made of fiberglass (a poor conductor) or a convertible, skin effect principles may not work. Corvette and Saturn owners, please note this fact.”

MYTH…
Never touch someone hit by lightning, they are electrified and you will be electrocuted.

Fact: When I hear that myth I am stunned that anyone believes it. The human body does not store electricity and is 100% safe to touch someone hit by lightning. And contrary to what some believe, most victims do not die from burns or fractured bones that may occur from a lightning strike. Cardiac arrest from the lightning strike is almost always the cause of death of those that die on scene. Immediate first aid in the form of CPR is needed, and often successful.

Lightning is not to be ignored and thunder is your warning. The Wilderness Medical Society states that there are approximately 25 million cloud to ground flashes per year in the United States. Most strikes miss people. The National Weather Service lists the four most common ways lightning strikes people, abbreviated here for clarity and space.

Direct Strike: This is the least common, yet potentially the most deadly way. Although fractures and burns are likely to occur it’s the current moving through the body that causes the greatest damage.

Side Splash: This occurs when lightning strikes a taller object (such as the tree someone sheltered under) and then “jumps” over to the victim.

Ground Current: Anyone outside near lightning strikes is potentially a victim of a ground current strike because the current travels outwards from the strike area. It causes the most lightning deaths and injuries among humans, livestock and wildlife. The internet has morbid photos of herds of elk, deer and cows killed by ground current strikes. Ground strikes have also cause multiple injuries and fatalities at sporting events.

Conduction: Most indoor causalities (a rare event) and some outdoor casualties are due to conduction. Lightning hits something such as metal fencing or plumbing in which the victim is in contact with.

I could ramble on for pages and pages about weather related safety in the outdoors but obviously being inside is safer. Situational awareness is the best defense and can significantly reduce your odds of being a statistic when thunder rumbles. Open pavilions, rain shelters and tents provide no safety from lightning as it travels through the ground. And contrary to what your buddy Joe may have told you, standing near or under an overhang of any kind, including a porch, is very dangerous because lightning travels along vertical surfaces and if it finds a short cut to the ground it will take it. If you are standing under a rocky trailside outcropping to stay out of the rain, and lightning hits that outcropping, you become the electrified short cut. If you can’t get to safety and are in a group, huddling or standing close together is the worst thing you can do because a ground strike will get everyone and there will be no one left to start CPR or get help.
Want to know more? Explore the website of the National Weather Service or other reputable science-based sites and enjoy the backcountry of Michigan or wherever your travels take you.