Learning how to be a FISHERMAN

Sometimes I impress myself. I’ll admit, it’s rare, but it does happen. You see, there is this thing in fishing where the angler has to juggle, at times, two opposing options. One can go fishing more or less mindlessly. I do this most the time. I’m just there for a good time and catching a few fish is a bonus. Or one can go fishing like they mean business — no fluff. They’re headed to the stream with a purpose. They dissect each and every piece of water, with the intent to put together a puzzle so elaborate it rivals the infinite. I also do this, but not as much. I think the true nirvana of all fishermen is to have these two ideas blend together, like a work of art, but I’ll save that discussion for another time.
Last November, I decided to take a little road trip. One last fishing excursion before the duties of winter shut me in for good. I was headed to the west end of the U.P., to a river, that if I mentioned here may get me killed. Once this issue hit stands it would be only a few days before a bunch of old time Finlanders found me and made me pay for my treason. So, for my own safety and my own fishing greediness I will also leave the location for another time. My plan was to drive through the night and fish two full days before heading back to my home on the eastern end of God’s country. The old timers reported the river to be high but plenty fishable. It didn’t hurt they mentioned a few double digit days just a few days before my planned trip.
I met these fellas years back, in the spring, on the Two-Hearted River. I was hiking to a favorite run when, on top of the high bank, I spotted three men lined up drift fishing a piece of fast water well above the run I was headed to. I stopped and watched while each of them plucked fresh run Lake Superior steelhead out of unsuspecting spots like surgeons. They looked meticulous, yet relaxed. There was no goofing around, celebrations, or photos, just a bunch of grumpy men acting like they’ve been there before. It took years of bugging them and proving my chops before they’d let me in on their secrets — this river I was headed to amongst their decades of fishing wisdom.
What I wanted to do was fish hard and methodical. Falls prior I hadn’t quite figured out this river like I would have liked. Probably because I was too concerned with heavy drinking, horsing around and too caught up with actually catching fish. I say this because, more times than not, the fixation on the aftermath of fishing leads many of us to forget why we’re even there in the first place. If you only care about photos and bragging, you miss all the important stuff, the fun stuff, the stuff that actually makes fishing worth a damn. 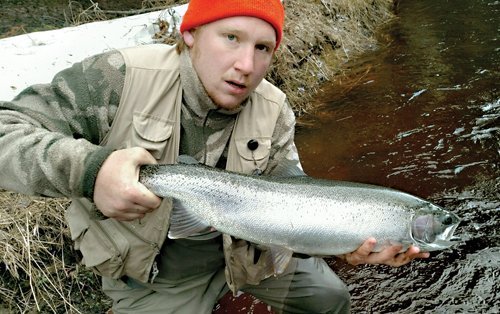 On this fall river trip the author meant business — no fluff. He went with the purpose to dissect each and every piece of water with the intent to put together a puzzle.

When I arrived it was a mild day as far as late November in the U.P. was concerned. There was little snow on the ground. And what was there was wet and slushy, the type of snow that is easy enough to drive through on two tracks but makes hiking up and down hills miserable. The river was, as the old timers reported, high but fishable. It was also devoid of signs of people. I saw no tire tracks, boot prints, spawn bags hanging in trees, or bobbers tangled in log jams. It was peacefully desolate. The only break in the dull silence the occasional bang of nearby rifles — faithful souls trying to punch their last deer tags before season’s end.
At my side were my two dogs and my 8-weight fly rod. I was going to drift fish fast water under a series of small narrow waterfalls. Now, most people would probably choose to bobber fish the large pool that capped off this series of long shallow fast turns but I wanted to learn this piece of water beyond lucking into a fish or two. I know a bunch of hoopla is made about shot patterns and float selection and I am not saying any of that is wrong by any means. It is just that, to really know a piece of water you need to know everything. I want to know every rock, boulder, stick, and grain of sand on the river’s bottom. To do so, takes fishing on bottom and ultimately, losing more hooks, split spot and leader than anyone would care to admit. However, at the end of a day like this, one can easily retrace their steps from the day before with a tremendous upper hand. With a more intimate knowledge, throwing cranks, center-pinning and drift fishing can all shine. But you have to crawl before you can walk.
So crawling I went. My split shot swiftly ticking along the river’s bottom like a jazz snare drum. Every so often I would feel a faint pause. Fish? No, just a snag. I would swear, retie, and resume crawling — a few steps downstream, question my sanity and repeat. Red squirrels ran up and down the river banks, caching away their final food supply for the long winter ahead while two porcupines watched me from their perch atop a large birch tree a few hundred feet downstream.
Using my drift as communication with the greater world beyond, I zeroed in on what lay in front of me. Too often we are passive to the world around us. It can become too easy to turn on auto pilot and drift around aimlessly, without any sense of purpose. But today I had a purpose. I reminded myself with each cast that I was on a mission. Each drift and snag was beginning to tell me story. A story that the red squirrels and porcupines probably already knew, but didn’t feel compelled to share.
As the day wore on, and I was beginning to feel a little defeated and much more exhausted, I moved back to the head of the first run where I originally began and made a few adjustments. The seams were narrow and short, most behind large cobbled rock. I shortened my leader and lightened my weight and began casting with a different approach — high sticking my drift to keep my bait just above the snags I had located earlier. Not a few casts later, the snags from earlier were moving, shaking, screaming silver bullets. Five and six pound steelhead fresh in from the big lake. Each fish spunkier than the next, they put a whooping on me that was beyond well deserved. All I could do was smile, shrug at the pair of porcupines, retie and try again. It was total bliss.
I never did land a fish that day. And I doubt I was supposed to. The second day of my trip was filled with many more hook-ups and a few to hand but that was just icing on the cake. I had learned a new stretch of river I will return to for the many more falls of my life and learned a much more valuable lesson. Sometimes, we fisherman get caught up with how to catch more fish. We obsess over what other people are doing. I obsessed over the tricks of the old timers that brought me there in the first place, failing to think about what I can do. What I can do is fish. Not the greedy lustful fishing, but the patient, attentive and purposeful fishing. Fishing that is far beyond a fish. Fishing that humbles you to the realization that you don’t have everything figured out like you’d thought, but that the humbling is sort of the point of it all in the first place.