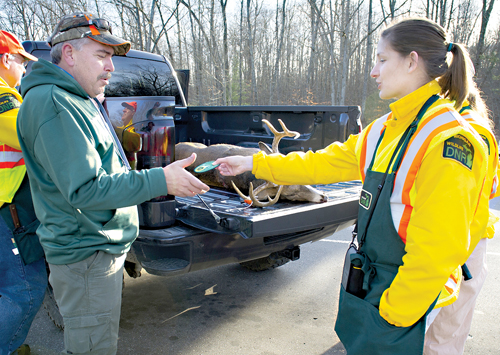 A DNR employee (right) gives a Michigan deer management cooperator patch to a hunter who brought a deer to a check station for chronic wasting disease testing. MDNR photo

The MDNR is sharing some highlights of the 2019 deer hunting seasons, which ended in late January 2020. Those seasons were marked by widespread participation in the state’s surveillance efforts around chronic wasting disease, especially in areas of the state with a known CWD presence. In addition to those CWD testing results, the department also takes a look at license sales, compliance with the deer and elk baiting and feeding ban and more:

Surveillance efforts for the 2019 seasons are complete. The DNR tested just over 20,000 deer for chronic wasting disease, continuing Michigan’s role as a national leader in CWD surveillance efforts. The year before, during the 2018 seasons, about 25 percent of all deer heads tested in the U.S. were tested here in Michigan.

“Once again, we’d like thank our hunters for their cooperation in helping us meet our CWD surveillance goals,” said DNR Director Dan Eichinger. “Testing for CWD is of primary importance for the department and we couldn’t meet these goals without the assistance of deer hunters.”

For the 2019 seasons the department set testing goals of about 9,200 deer in the Lower Peninsula’s 16-county CWD management zone and approximately 3,300 in the Upper Peninsula’s surveillance areas. Those regions, respectively, saw 16,000 and 1,500 deer tested. More than 2,500 deer also were tested in other parts of Michigan not associated with disease surveillance goals.

“This year, we achieved most of our individual county and area goals. In some regions, our goals were quite lofty, and even though we didn’t meet them, we still tested a lot of deer,” said DNR deer specialist Chad Stewart. “The goals we set, and the ensuing test results help us to determine where on the landscape the CWD is found and the scale at which it exists.”

At this time of the year, the department has shifted its CWD management focus by asking private property owners in CWD areas to assist in disease surveillance – and provides disease control permits to help them do it.

In the Lower Peninsula, Gratiot, Isabella, Jackson, Muskegon and Ottawa counties fell short of surveillance goals, though nearly 4,000 deer were still tested in those five counties.

In all, 65 CWD-positive deer were identified from the 2019 hunting seasons – and all were from counties with a known CWD presence.

“Our primary area of infection remains in parts of Montcalm and northeast Kent counties, where we knew the disease existed going into 2019 hunting seasons,” Stewart said. “We are encouraged that we have not found new CWD positives outside of this known area.”

Despite finding 65 positive animals, officials caution about comparing the low number of positives with the high number tested and saying there is not a problem.

“Fifty-three of our total positives came out of Montcalm and northeast Kent counties, where we tested about 3,000 deer,” Stewart added. “This may not sound like much, but we know from the experience of other states that without active management of the disease, CWD prevalence rates can increase rapidly over time.”

Stewart said that CWD is a problem in Michigan’s deer herd that will require a commitment to long-term solutions. “Active management includes targeted removals, baiting and feeding bans and carcass movement restrictions and is our best chance of keeping the disease as limited as possible for as long as possible,” he said.

Hunter Numbers in Michigan and Nationally

Last fall, much media attention was given to the fact that hunter numbers are declining in Michigan. While true, the trend isn’t new,
and it isn’t specific to Michigan. Across the country, states are
feeling the financial pressure from reduced hunter numbers, because revenue from hunting license sales makes up a large portion of the funding for critical conservation work.

“Nationwide, hunting has had a gradual decline over the last several decades,” said Eichinger. “The trend is likely due to a combination of factors, including generations of hunters that are aging out of the sport and younger generations that are less likely to participate in hunting due to societal changes.”

Last year, deer license sales were down about 3 percent over 2018. That decline mirrored past years, despite predictions of greater decreases due to Michigan’s deer and elk baiting and feeding ban. In fact, the hunter numbers declined least in the CWD core area, which is beneficial for monitoring and managing the disease.

“While the decline in hunters is certainly discouraging, we know that hunting remains an important part of Michigan’s rich heritage,” Eichinger said. “That’s why we always encourage veteran hunters to introduce the sport to new hunters whenever and wherever they can.”

The prohibition of deer baiting and feeding in the Lower Peninsula was another important hunting topic. The ban, which was implemented to limit the spread of CWD and bovine tuberculosis, sought to reduce the congregation of deer over bait piles, where disease can be spread through bodily fluids like saliva, urine and feces.

“While feedback we’ve heard indicates this hasn’t been the most popular regulation, the best available science shows that baiting bans are an effective tool to limit disease spread,” said Stewart. “Anything that we can do to limit the chances for deer to return to the same location hour after hour, day after day, helps to reduce the risk of disease spread. It’s a lot like not hosting a dinner party when you’re sick, to prevent your family or co-workers from getting sick.”

DNR conservation officers enforced the baiting ban in its first year and found that overall hunter compliance was satisfactory, though certainly not 100%.

“We appreciate all of the hunters who help protect Michigan’s deer herd by supporting the rules and regulations that are put in place to prevent the spread of wildlife disease,” said Chief Gary Hagler, DNR Law Enforcement Division. “It’s encouraging when our officers have these positive contacts in the field.”

To learn more about deer and deer hunting in Michigan, visit Michigan.gov/Deer.