In an effort to reduce conflicts between bear hunters who use bait and hounds, Gerry Maciok from Marquette, who is the founder and president of the Black Bear Bow Hunters Society, is proposing that a spring hunt be established for hunting over bait only. At the present time, bear hunting in Michigan is limited to the fall. In the U.P., the first five days of the season are limited to bait hunting. In the L.P., where bear seasons are short, the first day of general seasons are limited to bait hunting and the last two days are restricted to hound hunting. 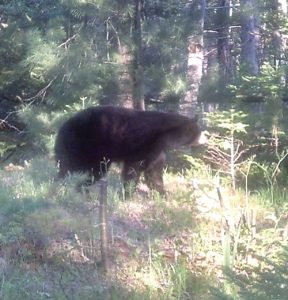 An experimental spring bear hunt for bait only was held in the state one year from April 1 through May 31, 1953. Spring bear hunts are held in most Canadian provinces and some western states.

Maciok is a member of the Bear Forum, a group of people representing various bear hunting organizations and hunting methods established by the DNR to provide input on all aspects of bear hunting. The forum normally meets once a year during December.

“We are in the process of drafting and presenting a proposal at the next user group meeting for split bear seasons,” Maciok wrote in a Facebook post for his organization. “We hope most Michigan bear hunters will be on board with this adjustment to further reduce conflicts with each style of hunting.

“We want to be as transparent as possible and find a solution to the interference that a lot of bait hunters have experienced over the years – some waiting years for a tag only to be impeded on by hounds. This regulation (Spring hunt) has many hurdles and was brought forward by me on social media well in advance of any meeting.”

The president of the Bow Bear Hunters Society came up with three proposals for consideration. Each of the proposals includes a January 1 through February 1 spring bear license application period, with results of the drawing available on February 28. Placing baits for spring hunts would be legal starting April 1 under each proposal. As part of proposal 1, 82% of the available bear tags would be for the spring bait hunts and 18% for fall hound hunts. Each proposal states, “If the desired harvest quotas are not met in the spring, more tags can be added to the fall hunt.”

Maciok is asking for serious input about his three proposals on the Facebook Page of the Black Bear Bow Hunters Society. He’s heard from hunters who both support and oppose the proposals and that trend is expected to continue.