The U.S. Fish and Wildlife Service is currently considering taking wolves off the Federal Endangered Species List for Michigan and other states where their populations have recovered. Michigan Department of Natural Resources Wildlife Division surveys reveals wolves are now present in all counties in Michigan’s Upper Peninsula. Michigan DNR wolf surveys indicate there is a minimum wolf population of 662 adult wolves. This is a minimum population since young of the year wolves are not surveyed. 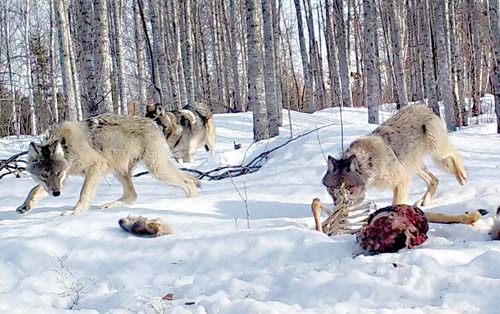 This wolf pack is in the Central Upper Peninsula, one of 139 U.P. wolf packs. Lance LaRock photo

Cody Norton, Michigan DNR Wolf Specialist said the average wolf litter is likely about four to six pups based on research in other similar states. Norton goes on to say in other studied wolf populations “up to 60 percent of the pups may die in the first six months due to disease and malnutrition.”

He went on to say the average U.P. pack was about five wolves. Norton continues, “Packs are typically comprised of a breeding pair, pups from the current year, offspring from previous litters, and occasionally other wolves that may or may not be related to the breeding pair.”

Norton said surveys indicate, “Wolf territories range in size from 5 to 291 square miles in the U.P., with an average of about 45 square miles. However, territory size has decreased over time, and the number of packs has stagnated, as the wolf population in the U.P. has increased.” Norton added “The U.P. wolf population appears to have been stable for the last eight years or so suggesting they’re likely nearing carrying capacity. This follows a long period of population growth from when we initially surveyed the first three known wolves in 1989 until 2011.”

Wolves seem to bring out strong opinions from Michigan residents, hunters, farmers, dog owners, and wildlife enthusiasts. Some are completely thrilled with greatly increased wolf populations and relish any chance to encounter this majestic predator. Others dislike wolves due to the impact they can have on deer, their deer hunting, or locally on livestock and pets (dogs). Many are in the middle where they get a thrill from seeing wolves or their sign, although they are not as thrilled when it is regular sightings in their favorite hunting area or close to their family home.

The Michigan Wolf Recovery and Management Plan (1997) defined a viable population as 200 animals for five consecutive years to allow removal from the state endangered species list. The Michigan wolf population has exceeded 200 animals for well over a decade. Since 2007 wolves in Michigan have been removed from the Federal Endangered Species List three times by the U.S. Fish and Wildlife Service, although each time environmental groups such as the Humane Society of the United States have used bureaucratic technicalities successfully to litigate the return of wolves to the Endangered Species List.

If the U.S. Fish and Wildlife Service removes wolves from the Federal Endangered Species List, once again, they would be returned to regulated state management by the DNR. State management would allow for wolf control in proven livestock depredation and certain other circumstances where wolves are in the act of attempting to kill dogs. It may allow for hunting if the wolf population is above DNR management goals.

Many deer hunters have strong opinions about wolves and their predation on deer. Those opinions can be based on both facts and or some misunderstanding. Wolf researchers who have followed wolves’ efficiency of predation on deer show varying levels of success.

Norton stated “a study in eastern Ontario (Kolonesky 1972) found wolves killed 25 percent of the whitetails they attacked during a typical winter, but that went up to 63 percent during a severe winter. You have to keep in mind that most of these studies (especially in forested systems), are only looking at mortality during winter when they can track wolves and try to piece together how many times a wolf or wolves attacked a prey species from tracks in the snow. We know from collar data that adult deer survival is much higher during the summer, and likely wolf hunting success is lower during this time.”

Regardless of how you feel about wolves, their population recovery in Michigan has been a success of a native species reestablishing itself. No matter what happens in terms of federal and state wolf management, residents of the Upper Peninsula will continue to live with wolves and will occasionally hear the howl of the wolf.