Are you looking for the next big thing in fishing? Trends in sport fishing come, and they go, but a few new wave methods stand the test of time. It’s this humble writer’s opinion that when you take an iconic lure and match it up with an even more epic presentation, good things will happen. 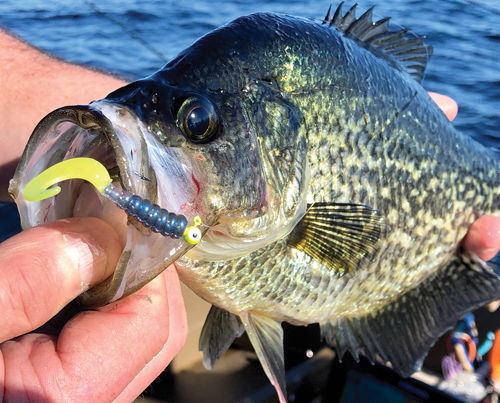 Trolling jigs tipped with curl-tail grubs are lights out for panfish like this black crappie and will also work for other species, including white bass, largemouth bass, smallmouth bass, bluegills, and walleye.

Enough suspense, trolling – aka pulling – using a host of lead-head jigs may well be the next big thing in fishing. Sure, anglers have been dragging jigs using an electric motor for almost as long as we have had electric motors, but the newest wave in jig fishing involves trolling jigs suspended in the water column.

Anglers who spend a lot of time targeting walleye, crappie, white bass, largemouth bass, and a host of other species will find jig pulling is a worthy presentation. Arguably crappie fishermen routinely pull jigs, but it’s relatively rare to see an angler applying this interesting presentation for other species.

A 1/32 to 1/16 ounce jig dressed with a curl-tail grub and long-line trolled behind a boat has crappie success written all over it. In the southern states, this simple presentation accounts for a huge percentage of the crappie harvested in any given year. Not only is long-lining jigs effective at catching crappie, it’s one of the best methods for covering water to locate roaming schools of fish.

To get the most from long-lining, avid crappie fishermen equip themselves with rods that vary in length from about seven feet to 12 feet long or even longer. By staggering rods of different lengths, 7, 9, and 11 feet, it’s possible to fish multiple rods and also cover a massive amount of water.

In many states, there is no limit to how many rods an angler can use. “I spend a lot of time targeting crappie in Florida during the winter,” says Dale Voice, a retired snowbird from Cadillac. “My typical set up involves long-lining four rods off each side of my boat. I mount rod holders using a downrigger board mounted across the gunwales near the back of my boat. I could run more rods, but eight lines keep me plenty busy landing fish and resetting lines.”

Pulling jigs for crappie is a game best played with light action rods and light line. Many manufacturers produce rods designed especially for trolling jigs. “I use fluorescent six-pound test monofilament for jig trolling and ultra-light spinning reels,” explains Voice. “Using fluorescent monofilament makes it easier to see the spacing between the jigs and also to untangle lines if a fish gets caught up in another line.”

Jig trolling for crappie is also a presentation that calls for super slow trolling speeds. “I’m using pulling jigs at .75 to 1.25 MPH,” recommends Voice. “The slower you troll, the deeper the jigs fish, so it’s important to watch trolling speeds very closely. An auto-pilot style electric motor is the best tool for slow trolling crappie jigs and dialing in the speed precisely.”

Crappie fishermen favor 1/32 and 1/16 ounce jigs for most jig trolling applications. The garden variety curl-tail grub is hard to beat, but at times paddle tails or split-tail grubs produce better results. When fishing gets tough, seasoned veterans will go a step further and tip their jigs with a small minnow to add extra enticement.

Attractor jigs like the famous Blakemore Road Runner can be especially deadly when fishing in stained or turbid waters. These iconic crappie jigs are available dressed in Maribou (ideal for tipping with live bait) and also with a curl-tail grub.

Quietly, a growing number of tournament pros are applying jig trolling to their walleye fishing agenda. “The thing is jigs present a completely different look and action than trolling with traditional lures like crankbaits or spinners,” says Hall of Fame angler Keith Kavajecz. “A jig has that subtle swimming action and lifelike appearance in the water that’s hard to duplicate with other lure groups.”

While jig trolling for walleye may not be mainstream among avid anglers, it’s only a matter of time before the masses discover how effective trolling with jigs can be.

Any jig style can be trolled, but search baits like the Storm 360 GT Swimmer are emerging as the obvious jig and plastic combination. The 360 GT Swimmer is a jig with an action lip molded into the bait. The lip helps this jig achieve a little more diving depth, but just as importantly, it imparts action to the jig as it is pulled in the water.

Originally designed as a casting search lure, the 360 GT Swimmer is also ideally suited to trolling applications. Jigs can be long-line trolled directly behind the boat, but these lures are also ideally suited to trolling in combination with in-line boards. Small in-line boards like the Off Shore Tackle Awesome Crappie Board are perfect for spreading out jig lines to cover the maximum amount of water.

Currently, the 360 GT is available in 1/8, 1/4, and 3/8 ounce models. No doubt, as these lures become more popular with walleye trollers, larger sizes and more color options will hit the market.

Jig trolling has its roots with crappie anglers, and there is little doubt that walleye anglers will also benefit from this unique presentation. The question becomes, what other species can be targeted by trolling with jigs?

The answer is any species that is routinely found suspended in the water column can be caught trolling jigs. White bass that are routinely found in huge schools would be a classic example of where jig trolling could become epic.

Both largemouth and smallmouth bass are suckers for the subtle action of a jig/swimbait combination. The same could be said for slab bluegills that often spend the summer months suspending in open water.

Any time the topic of trolling comes up, one of the first questions anglers ask is how deep will that dive?

The latest version of the Precision Trolling Data phone app (version 5.0) includes a wealth of jig trolling data that can be accessed using either an iPhone or Android smartphone.

Under the Blakemore category, anglers will also find Dive Curves for the 1/16, 1/8, and 1/4 ounce Road Runner attractor jigs. All the crappie sized jigs in the PTD app were tested using six-pound test (.009 diameter) monofilament line.

The new jig trolling data available from Precision Trolling Data can be purchased directly from the Apple App Store or the Google Play Store. The data is sold several ways, including individual lures, versions, and also lifetime package. Soon a “crappie version” of Precision Trolling Data will be released that will be sold as a subscription. This version will include all the jig data and dozens of the most popular crankbaits routinely used in crappie trolling.

Jig trolling is one of those classic presentations that is being reborn and used by a whole new generation of anglers. The applications for trolling jigs are almost as endless as the imagination of those who fish passionately.

Is jig trolling the next big thing? You be the judge.