A matter of compassion and respect

Hunter saves fawn’s life from aftermath of I-75 accident

We’ve all seen the aftermath of a car-deer accident. Bloody, gory and deadly. In Michigan, it’s common to come across such a scene, no matter what road, no matter what time of the day – the end result is always the same.

Ryan Boik, of Trenton, was on his way home from work, just another day. As he traveled the heavy traffic on I-75 he came across a fresh road kill – not surprising or out of the ordinary.

As Ryan maneuvered around the mangled deer, still in the middle of the road, he saw some movement. On second glance, the movement was a fawn trying to free itself from it’s dead mothers womb. 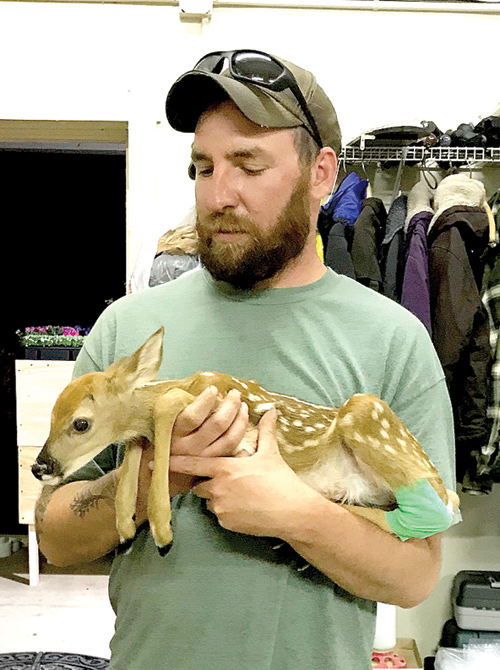 Ryan Boik with fawn he rescued from I-75 after mother was killed in accident prior to birth.

Birth was imminent prior to being struck.

Ryan took the next exit and returned to help the fawn before its very short life ended as its mothers had.

“I took my work shirt off, ran into the middle of I-75, pulled the fawn from its mother and wrapped it in my shirt,” Ryan told me.

“It was the right thing to do. I just couldn’t drive by and not help,” he continued.

He laid the bloody, quivering fawn in his front seat, injured but alive.

As reported in the Detroit Free Press, Ryan took the fawn to Out-Back Wildlife Rehab Center in Monroe County to be treated. Keirstie Carducci, owner and operator of the rehabilitation center, said she sees traumatic births frequently.

“He (Ryan) was still shook up — I don’t think he realized what he had just done by pulling a fawn out of a dead mom in the middle of I-75,” she said.

Usually after a rescued fawn comes in that was birthed after their mother died, they will die within 24 hours, according to Carducci. But this fawn made it past the essential 24 hours and is doing extraordinary well, she said.

The fawn had injuries on her back legs, but they were treated at a local clinic, and she has been able to stand on her own.

The rehabilitation center is located at Carducci’s home. She said she takes in about 600 animals to rehabilitate over the course of the year. She said she will keep the fawn and the rest of her rescued animals until fall, when she sets them free back into the wild.

This experience has inspired Boik and his wife, Monica, to open their own wildlife rescue. They are currently running a GoFundMe for their licenses and expenses. Boik said what is not used for their mission will be donated back to Carducci’s rehabilitation center.

Aside from the Free Press story, Ryan was also featured on Channel 2 Fox News. (You can see that on Woods-N-Water News’ Facebook page along with a video Ryan did moments after the rescue.)

“I grew up in an avid outdoor family and we all respect and practice the hunting lifestyle,” Ryan said.

The Boik family has hunting property near Indian River.

“We certainly enjoy our whitetail and waterfowl hunting. In fact we buy very little store bought meat – we like to know where our food comes from,” he proudly stated.

“I was taught to respect the game we take and we pray and thank the animals we take for our nourishment,” Ryan went on to say.

Ryan and Monica plan to move to Indian River someday and open their rescue center there.

“There is a lot of licenses to get and we have lots to learn yet, but we just want to give back to nature,” Ryan explains.

“For some, hunters have a bad reputation. Not all hunters are as horrible as they may think,” Ryan stressed.

“Hunters can be compassionate and respectful. I didn’t see anybody else running out in the middle of I-75 during rush hour to save a baby deer,” Ryan concludes.

Ryan practices what he preaches when in comes to the outdoors and we are proud to have him in our ranks.