Terry Tadiello, 71, from Crystal Falls, was attacked by an adult female black bear on the night of May 14 when he attempted to scare one of the sow’s yearlings away from his bird feeder containing sunflower seeds. Tadiello wasn’t seriously injured, but he received 22 scratches, eight shallow puncture wounds, and was badly bruised. His wife’s actions saved him from more serious injury.

“It happened very quickly,” Tadiello said. “Bing, bang, boom, and it was all done. Then I went inside to lick my wounds. The whole thing lasted about 10 seconds.

“The way I look at it, she was gentle with me. I had seven or eight scratches across my belly area. They were all superficial. The claws could have gone in deeper, and I don’t believe she bit me.”

The Tadiellos had already gone to bed that night when the bears arrived at about 11:00 p.m. Central Time. They have a motion-activated light on their deck where the bird feeder is located, with a door that opens onto the cement deck.

“I must have rolled over in bed to face the deck, and the motion light came on,” Terry said. “Then I heard a bang in the front yard. I got up to see what was going on and saw the bears. There were mama and two cubs. The banging was them getting sunflower seeds from the bird feeder.”

Terry commented that the “cubs” were probably two years old because they weren’t small like cubs born this year would have been. The youngsters were actually 1 1/2 years old or yearlings. Cubs are born in dens during the winter, usually during January, and cubs that survive enter dens with their mother the following winter. The young bears are more than a year old when they emerge from dens in the spring. 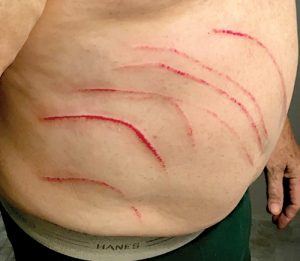 The claw marks on his right side and across Terry Tadiello’s belly could have been much worse.

Yearlings typically separate from their mothers during late May or early June as she prepares to breed again. Mother bears usually initiate family breakup by aggressively chasing their offspring away.

“After seeing the bears, I woke up my wife and asked her, ‘Do you want to look at some bears?’ Mary got up, and we watched the bears eat seeds from the bird feeder. Our house is on a hill, and it wasn’t long before I saw the mother bear go down the hill, and one of the yearlings went after her.

“One of the yearlings remained at the bird feeder, and I didn’t want it to damage the feeder. I looked around to make sure its mother was gone, stepped out on the deck and hollered, ‘Get out of here!’”

What Terry didn’t realize is that the mother bear had started to go down the hill, but had circled back uphill to the opposite side of the deck. Firewood is stacked on the deck in that location, and the shadow cast by the pile of firewood blocked the bear from view. When Tadiello exited the house and hollered at the yearling, its mother perceived his actions as a threat and attacked.

“All I saw was her head coming at me,” Terry explained. “I put my right arm up to try to protect my face before she cold-cocked me with a left jab. She knocked me down, and I fell into a metal cabinet next to the door that we put shoes and boots in before going into the house. The bear backed off because of the noise from the metal cabinet.

“I went black briefly, so everything is a blur. My left arm and shoulder got scratched up, too, and I’m not sure how that happened. The next thing I remember is pulling myself up by the door jam. My wife grabbed my arm and pulled me back into the house and closed the door. That was the end of it.”

Terry admitted that what happened was his fault. He realizes that the female saw him as a threat to one of her offspring and reacted to try to protect it. He also realized his injuries could have been much worse.

The worst injury he got was from the initial blow to the side of his head when a claw went through the cartilage on Terry’s left ear. There was a claw mark across his neck below the ear. If that claw had gone into his neck, his carotid artery could have been severed.

Terry’s wife treated the scratches and puncture wounds inflicted by the bear. He didn’t go to a hospital, nor did he report the incident to the DNR. He didn’t want the bear trapped or killed.

Tadiello also left his bird feeder up because he likes feeding the birds. He moved the feeder higher, but not high enough to prevent bears from accessing it. The sow and her pair of yearlings returned for more sunflower seeds on Monday, May 18, at 2:00 a.m. The female was able to reach the bird feeder and knock seeds out of it while standing on her hind legs. Terry stayed in the house that time.

Terry has not hunted bear, but he hunts deer and small game. He said he’s gotten plenty of trail camera photos of the bear that attacked him on his property.