Even though the number of deer hunters declined significantly in Michigan during 2019, the hunters that remained harvested more deer than the year before, according to preliminary figures from the DNR. The state agency estimates that 14,000 fewer hunters hunted whitetails in the state during 2019 than 2018, but they killed 3,000 more bucks and does than a higher number of hunters did in 2018. Those estimates were derived from information provided by thousands of hunters statewide who returned survey forms in the mail (25,070) or filled them out on the DNR’s website (5,006).

Based on that summary, it looks like 2019 deer seasons were pretty good. There appears to be plenty of deer to go around for the lower number of hunters that remain, increasing success. You get a totally different picture, however, when looking at hunter numbers and harvest by region and districts. 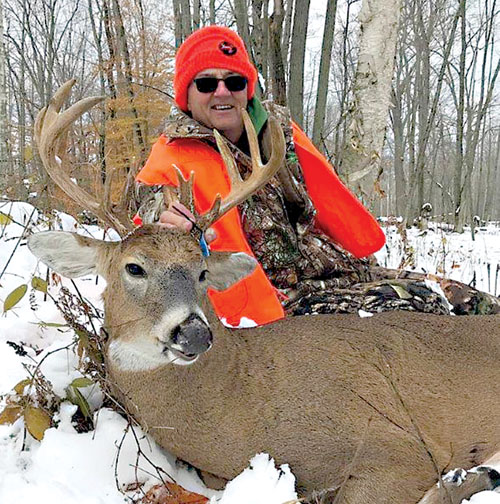 Gerald Peruski with his trophy 13-point harvested in Michigan’s Thumb.

On a regional level, the only portion of the state where hunters actually bagged more deer during 2019 than the year before was Region 3 or the southern Lower Peninsula (L.P.), where deer numbers are highest. The estimated harvest of bucks and does for all seasons in that region was 204,994, an increase of 7,914 from the estimated kill of 197,080 for 2018. The harvest of both bucks and does went up by 4% in that region, according to the DNR.

When looking at harvest figures for the U.P. archery and firearms seasons, it’s clear that most of the decline in the buck kill occurred during gun season. The buck kill dropped 18.2% (about 4,000) between 2018 and 2019 for that season. Heavy snowfall in parts of the U.P. just before the 2019 gun season that prompted deer to leave some areas to start traveling toward winter yards and prevented hunters from accessing some locations, contributed to that reduced success on bucks.

“Snow depths reached depths of over 30 inches in parts of DMU 048,” DNR wildlife biologist Dave Jentoft from Sault Ste. Marie reported. “The snow spurred deer migration out of some higher snowfall areas (not just in DMU 048) and prevented some hunters from being able to get to camp or hunt. This was reflected in common comments about deer migrating out of an area, snow limiting access, and some not hunting because of the deep snow.”

Jentoft compiles the DNR’s annual U.P. Deer Camp Survey and the comments he refers to were on those deer camp survey forms.

Figures on the district level show that deep snow during last year’s U.P. firearms season had the most impact in the eastern portion of the region. The U.P. is divided into two districts (east and west). The buck kill declined by 26% in the eastern U.P. gun hunt compared to a drop of 16.3% in the west U.P.

The buck kill in the UP during archery season only declined by 2.6% in 2019. The buck harvest by bowhunters actually went up by 11.3% in the east UP last fall, but dropped 5% in the west UP.

Although the number of deer hunters was down during most seasons in the northern two-thirds of the state, the number of gun hunters actually increased in the southern L.P. or Region 3 in 2019 compared to the year before (223,174 versus 221,855). Bowhunter numbers also increased slightly in Region 3. That increased hunting effort was partly responsible for the higher deer kill in the region.