A view from above

One of the DNR’s newest programs…By Kathleen Lavey – MDNR

Wildlife biologists from the Michigan Department of Natural Resources were looking for a bear. Not just any bear. They were in search of a sow that had previously been used as a surrogate to raise orphaned cubs. But she had broken and slipped out of her radio collar. So, they took advantage of one of the DNR’s newest programs and called for a drone.

“We know the general area where she dens, kind of this 40-acre spot,” said Kevin Jacobs, aviation manager for the DNR. “But there is a lot of heavy cover. We put a thermal camera on there and got a really good heat image that was the right size on the ground.”

Finding a surrogate mom for bear cubs is just one way that the DNR uses drones – often referred to as UAV, or unmanned aerial vehicles. Licensed DNR staffers also use the pint-sized choppers equipped with cameras to help manage and promote state forests, parks, wildlife and fishing.

The drone program, based in the department’s Forest Resources Division, has been expanding since it started with just three vehicles in 2016.

“The DNR entered this really at the front half of the drone industry. As far as commercial viability, we thought it was important to be at the head not at the tail,” Jacobs said.

Jacobs and DNR resource analyst Nick Dohm have shepherded the program since its beginning, paving the way for thoughtful growth.

“We didn’t want to get carried away at first,” Dohm said. “We’ve got good control over what the program is, what we’re looking for, where we want to grow in the future. We’ve been able to look at what worked and what didn’t work so far, and we can expand on that a little further.”

By the middle of 2017, the DNR program had three drones and a certificate of authorization from the Federal Aviation Administration. It’s the second Michigan agency to receive a certificate, after the Michigan State Police.

“At that point, it was just sort of trial and error, ‘show me what these things can do,’” Dohm said. “Over time we have built up just how useful they are for the department.”

They can do a lot.

The DNR crew now includes seven licensed pilots and 10 drones of different sizes and capabilities. The team has explored using drones to assess forest health, look for various types of wildlife and get photos and videos that show off Michigan’s glorious landscapes. They are currently preparing to fly a drone down a 4-mile stretch of the Tahquamenon River. They also have flown over harbors and shooting ranges to make promotional videos.

Drones never can replace the DNR’s existing aviation program. Instead, the tiny aircraft complement what their larger, fixed-wing counterparts can do.

“Drones will fly 20-35 minutes on a charge versus an airplane where we can fly six hours nonstop at 150 mph,” Jacobs said. “You’re really covering two different needs with those two different tools. The idea is to use both of those tools to their fullest.”

One advantage for drones: hovering. That makes it easier to use thermal imaging to search for animals, people or hot spots in wildfires.

“With the plane, you would have to do continuous loops to look at the area,” Dohm said.

DNR drones have been used in joint projects with the National Audubon Society to search for tern nests and to do a survey of muskrat huts with Central Michigan University.

Equip a drone with the proper camera, and forest health staff also can get a deeper look at what’s happening in the forest, right down to single trees.

“We can fly a regeneration site that has 4-foot pines in it and get updated, high-resolution imagery and tell the health of individual trees,” Dohm said.

In a partnership with Northwestern Michigan College in Traverse City, DNR drones used high-resolution imagery to map an 80-acre stand of trees that had root disease moving through. 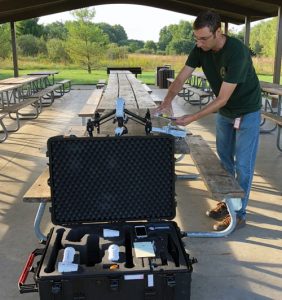 Nick Dohm, a Michigan Department of Natural Resources resource analyst, who co-leads the DNR’s drone program, prepares for a flight.

“You could see what trees were dead, but also give a perspective of which trees were suffering or in the process of dying that you couldn’t see with the naked eye,” Dohm said.

Once the images and global positioning satellite locations were loaded into an iPad, forest health experts could walk up to individual trees for an in-person assessment.

Michigan also is exploring the use of drones to fight wildland fire.

Dohm, Jacobs and other DNR staff members watched a demonstration of the IGNIS firefighting drone last fall and have purchased one for DNR use. Michigan is one of the first Midwestern states to adopt it.

“The tool is being used with great success nationally,” Jacobs said.

The drone is equipped with a carrier that contains hollow spheres filled with a mix of chemicals that will burn when mixed and dropped.

It can create fire breaks or start prescribed burns in terrain that firefighters find difficult to reach.

“These things can really cover a lot of ground versus somebody on foot,” Jacobs said. “When we do prescribed burns in some of these marsh areas, they’re lighting phragmites or cattails out of a canoe, or we have to wait until there is ice so we can navigate through the wetland.”

Both Dohm and Jacobs see continued, strategic growth for the drone program.

They’re looking into even more possibilities such as using drones to plant new trees in clear-cut Kirtland’s warbler habitat and to spray herbicide, which is sometimes used to eradicate invasive species.

“We want to keep an open mind,” Jacobs said. “There are ideas that are continuously evolving, so we see what is popping up and available and what might fit our needs.

“There is a tremendous amount of potential in areas where we probably don’t even have a clue yet.”

While the DNR has just begun to explore the many ways drones might be used in its work, they already have proven to be a
valuable tool in managing and promoting Michigan’s natural resources.