September has long been known as a month of transition for fishing in Michigan. Besides the fact that many sportsmen and women are starting to turn their attention to hunting, the bites in many areas have, at the very least, changed, and some are completely gone. Water temperatures in Michigan are still extremely high, especially in the first two weeks of September. Baitfish are not yet pouring into river mouth locations, so the bite seems to be on the slow side. But read on as there is still some outstanding fishing to be had in September.

Want a St. Clair Muskie? September is prime time, and more fish are migrating out of Canadian water and moving to the American side.

While a muskie can certainly bite anytime on St. Clair, September through late fall is always better on the American side. Areas all along the western shoreline produce fish, but the dumping grounds near the mouth of the Detroit River and Anchor Bay on the far north end of St. Clair produce starting in September.

The usual baits of inline spinners and magnum Shad Raps are great baits to cast or troll, and they will not break the bank. I like to find wind-blown areas with close deeper water that is also had a few weedbeds but minimal floating weeds. That takes a little bit of moving until the right conditions are located but can produce well.

Sault Ste Marie in Michigan’s Upper Peninsula ranks second in my greatest September spots to fish and has a fantastic walleye bite in September. There is also an equal opportunity to hook an Atlantic or Chinook salmon as well. Walleyes migrate north from Alpena up through Drummond Island up through the St Marys River to the Soo. Some of the best fishing is right in front of the Anne Osborn boat launch at the Soo on the rock piles. But there are so many places to find fish here. Miles and miles of pristine river system plus the weed edges and breaks of Munoscong Bay and Lake George will provide anglers plenty of spots to search for walleyes, smallies, and pike. The North Channel and the lock area itself attract Chinook and Atlantic salmon, and each morning a few boats will be pulling spoons very shallow or anglers will be casting in the rapids area. The Soo is truly an angler’s dream. 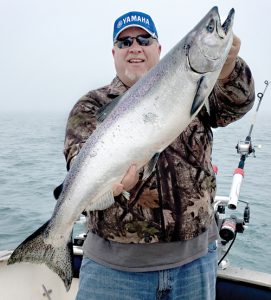 The author, Mark Sak with a trophy fall Chinook

Lake Michigan river mouths, namely the Betsie, Manistee, Pere Marquette, and Muskegon, come in number three for my favorite September fishing spots. Big feisty Chinook salmon start running up the rivers for their annual spawn, and anglers intercept them in boats staging near the rivers or catch the early fish in the rivers. September weather dictates this bite as a north or east wind will blow the warm water out from the shoreline, leaving some cooler water, and that can bring salmon rushing to shore. This year promises to be a good year for big fish again and anglers will be rubbing sore arms after a battle with the king. Also, don’t forget the Platte River Coho bite in mid to late September. Again, anglers can fish by the mouth and see fantastic action on one of the best-tasting salmonids in the Great Lakes. Thousands of fish stack up near the mouth before running up the river.
Finally, weekends o
n several of Michigan’s biggest inland lakes are a great choice in September. We are starting to see the outdoor channels televise more and more shows on northern Michigan inland lakes for giant smallmouth bass. It is some of the best smallie fishing anywhere on the planet, and the minute the water temps start to decline, the fish go on the bite. Crystal, Burt, Mullet, and Hubbard Lakes are at the top, but there are just too many quality lakes to mention.

There is no better place to be than Michigan in the fall and being on the water matching wits with Michigan’s feisty gamefish makes us incredibly lucky anglers. The options are truly endless and filled with world-class fish and scenery. The merchants in these areas obviously could use our financial support as well as it has been a tough year economically. I hope you can get out and enjoy a few days of fishing this fall and as usual I will see you out there.n