A once grand Michigan tradition slipping through our fingers

Deer hunting just isn’t what it once was. Time, man, Mother Nature and technology has changed it. But then again, what hasn’t changed, absolutely nothing.

Today, the very best hunting is in the southern part of our state, keeping hunters close to home. Gone for many are the long trips to northern Michigan to set camp and hunt. It’s an outdoor heritage and tradition slipping through our fingers.

We’ve all heard the stories of crossing the Straits by ferry. The miles-long line of cars and trucks filled will camping gear, tents and food for an extended hunt.

Later in the 1980s the whitetail herd was nearly 2 million and an orange clad army of 850,000 invaded our woods. Those numbers, sadly, have declined dramatically. And just as sad, our deer camps are vanishing as well.

Hunting season means many things to many people. For me going hunting is as much about deer camp as it is bagging a deer.

It’s grandpa, or another veteran of numerous hunts, diagramming deer drives on the back of a pad of paper used to keep cribbage scores. 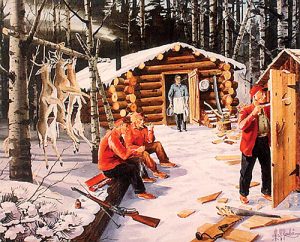 It’s deer camp, where the front porch always smells slightly like skunk and where antlers of some of the better bucks hang over the doorways.

It’s a fire in a woodstove that keeps you and the venison stew warm between hunts and dries boots overnight.

It’s hauling in an armload of wood from the enclosed porch before the light’s gone and setting the alarm clocks that will go off well before first light.

Deer hunting in Michigan means not getting any sleep the night before the big hunt. And listening to tales of “big bucks” taken in years long gone.

It’s struggling to fall asleep to a chorus of snoring and the smell of feet.

It’s walking the Michigan swamps and rugged highlands to get to your favorite stand. And if you’re not careful, it’s the crashing of a deer which was bedded down in the cattails. But no matter where you hunt, it’s about hunting hard — walking, sitting, stalking and sometimes crawling from sunup to sundown.

Deer camp is about eating the biggest meals of your life and snacking in between on traditional goodies like pickled eggs and pigs knuckles. It’s about pancakes, eggs, bacon and ham. And it’s all about coffee brewed over an open fire.

It’s keeping your hands and feet warm while on the stand.

It’s about flashlights, candles and lanterns.

It’s knowing the lay of the land and that familiar sound a deer makes as he cautiously approaches your stand in the fallen leaves.

And really it’s about family and friends whom you only see once a year. It’s about good conversation, and deep belly laughs.

The truth is it’s more about deer camp than it is the deer.