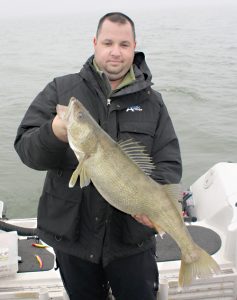 The key to big November walleyes is to find suitable baitfish.

November is one of the best months to catch a wall hanger walleye. Big, thick-shouldered, 30-inch class walleyes that buckle the angler’s knees when they finally get them up to the surface. The kind of walleye that makes anglers yell so loud others can hear them a mile away. There is no question in my mind that I have personally caught bigger ’eyes in the late fall period than around the spring spawn. I am sure that statement may raise some eyebrows, but there is one simple reason for it. These fish are hungry and not just lashing out at baits like spring walleye commonly do. They instinctually know it is a time to take every opportunity to eat and prepare for the winter and following spring spawn.

Fall fish are not a lot different than a bear going into hibernation. But there is one issue that anglers run into when fishing these fall trophy walleyes. They often feed differently and sometimes become exceedingly difficult to hook up and keep them on the line once they have hit the bait. It is not uncommon to hear frustrated anglers on the radio talking about how many fish have become “unbuttoned.” There is a good reason why and I will discuss that in a bit. There are several ways to increase the catch rate in the fall, so if these big water heavyweights are on your bucket list this fall, hopefully, you will not be one of those on the radio complaining of lost fish.

Big walleyes constantly follow their prey. Find suitable baitfish, and anglers will almost always find some big fish hanging around. When we look at November patterns for walleye, there are two things to keep in mind: The size of the baitfish and the general location of baitfish. We know river mouths draw baitfish in the fall. Rivers hold much of the food that baitfish eat, and these baitfish also must feed up in the fall. They are phytoplankton feeders throughout the summer, but they will also feed on insect larvae, so rivers provide most everything they need.

I have fished fall walleyes on the Great Lakes for 30 years and can say with confidence that fall anglers do not need to run 10 miles offshore to find big fish. Some of the best fish are within a mile of the river mouth. Big walleyes love to move shallow towards river mouths, especially at night. They will often drop out to a first break or weed line, sometimes only 100 or 200 yards from the breakwall. We have all heard about anglers on piers taking big fish at night casting, so know boat anglers still have an advantage of being able to cover these areas with multiple baits in a trolling set.

Baitfish are all grown up. They have had all summer to feed and grow, so it is important to match the hatch with a bigger profile bait that will match those baitfish. The most popular baits are the bigger 6-inch body baits; Husky Jerks, Reef Runners, Rogues, and Bandits. These baits offer a very slow wobble, and most anglers are pulling these baits extremely slow (1-1.2 mph), in cold water as big walleyes have a lot of bait to choose from during fall and won’t necessarily chase a bait down. Giving them a good look as the bait slowly wobbles towards them, often rattling, and giving off fantastic vibration increases the rate of hook up. Here is the problem, the slow speeds and fact that these cranks are hard plastic often allow the fish to hit, feel the hardness and immediately try to spit the bait. Sweeping the rod forward is not usually the way to set that hook as the monofilament line will stretch then go slack, often giving the big fish its head. The absolute best method I have found is scenting up the crankbaits. Sprays can help, but crawlers are king. Take a 1-inch piece of crawler and apply it to the front treble hook and make sure it is the hook on the treble that faces straight forward. Set the crank in the water and watch it run for a few seconds to make sure it is still running true, then send it out. It will provide amazing results for slowly trolled crankbaits and increase how many fish come to the net.

I always mention safety in the fall. Get a couple of buddies and run several boats. It is a great way to spend a warm November day in Michigan, and as always, I will see you on the water.