A Hunt in God’s Country

Some stories are too good to be true

Filled with excitement, I grabbed my bow and gear and hit the road. I made my way to a new piece of ground that I have never hunted on before. There was that feeling building inside of me that craved an adventure, that feeling of the unknown.

I pulled into the lane, and I didn’t have a big woods that I am accustomed to hunting, instead a unique piece of farmland that looked promising. I hopped out of the truck and geared up, and made my journey. The property had large sections of mixed farmland, fence rows and deep drainage ditches—what a beautiful piece of land out in the middle of nothing. I made my way to the only piece of woods in this section. It was a fencerow, but this wasn’t your ordinary fencerow. It was the only artery that these deer could use to transition. It had a huge section of standing corn on one side and a large, lush green field on the other, and the section of timber was sandwiched in between with a four-wheeler trail in the dead center. The trail was headed toward my destination so I followed it. 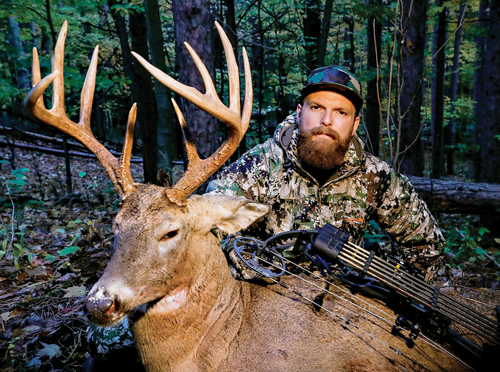 There were a lot of ridge tops and structure in this fencerow. I scouted quickly; I could see the ground was riddled with scrapes and rubs. The cut trail led me to a high saddle where I quietly made my way up, where I found a network of trails running along the top of the hill, hand-size tracks, freshly opened scrapes, and thigh-sized rubs on trees along the top. I didn’t think following this four-wheeler trail into the unknown would lead me to this magical place. I knew this was exactly where I wanted to be.

I dropped some milkweed to check my wind and found the tree I wanted to be in with the wind in my favor. It wasn’t perfect, but I didn’t want to overthink it. I wasted no time. I began to hang my first climbing stick against the tree; it made some racking noise as I adjusted the stick into position. Being a cherry tree, I didn’t think about it being so noisy at the time, rushing to get set up. So, I decided to move over to the smaller smooth barked maple just a couple of yards over. I removed the stick and began to turn… I heard a twig break behind me and caught a glimpse of some movement coming up the hill. At eye level up close and personal, it was a buck, and he was 10 yards away! Surprised and shocked, I froze in my motion, trying to keep my composure in check.

He must have been bedded close, just on the other side of the hill, and heard the racking of my climbing stick against the cherry tree. I could see that he had killer beams and awesome tine length. It was a no brainer; I was going to try and shoot him. He was so close I could see the whites of his eyes. He moved his head searching for the noise he just heard. Half crouched and climbing stick in hand, I waited for the buck to look away. I squinted my eyes, fearing he could see me blink. Several seconds felt like an hour….he finally looked away. I quickly dropped to my knees and laid down the stick. I got as flat as I could to the ground. The giant 10-pt. stood still, looking in the opposite direction for several minutes. But I faced another challenge; my bow was still on my back from the hike and still in its sling. I started to remove my bow ever so slowly, and I managed to get the bow off my back and out of the bow sling without him busting me. He looked in my direction again, he wind checked and took two steps forward broadside in a shooting lane and looked away.

As I nocked my arrow, my mind was racing with confidence. My blood was pumping harder than ever through my veins. I could feel my heart pounding in my chest and the hard thumping in my neck. All I could think about was this will happen. I am actually going to pull this off. The buck looked at me for the last time and turned his head away once more, giving me my chance. The moment I have trained for and practiced for; I drew my bow and settled the pin. I released and watched the arrow hit true, right in the vitals! The buck wheeled out zig-zagging, grabbing ground, making his way to the standing corn where he expired.

I fell apart, shaking like a leaf! He was down. I had to collect my thoughts. What an amazing experience to have gotten so close to this beautiful buck and how grateful I was for making a clean shot. An 11-minute memory that will last a lifetime. Most would say I was lucky, and I was in the right place at the right time, I totally agree. But there is always a path you are set on, a path that leads us in the direction of the unknown; we have to trust our instincts and follow and jump into a new adventure in hopes of coming out with a victory. I realized sitting on the ridge looking down at this animal I just harvested, I’d found what I had been hunting for; God’s Country.