Hunting deer during the late archery season is a challenging time for bowhunters who decide to brave the cold conditions and head into the woods. Blustery winds, low temperatures, and deep snow are just a few of the weather conditions Mother Nature can throw at you. Deer are also still a bit spooked from the pressure of hunters during the firearm deer season. 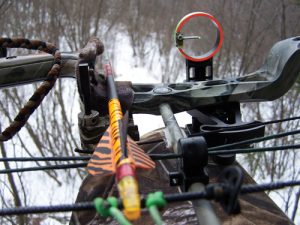 The late archery season offers bowhunters throughout the state an excellent opportunity to fill any remaining deer tags. Author photos

However, the good news is the bucks will be extremely active searching for food to regain the weight they lost during the rut. During this time, they become vulnerable to those disciplined enough to put the time in on stand.

Late archery season in Michigan runs from December 1 to January 1, and I try to dedicate time in the woods with bow in hand even if I haven’t filled any of my deer tags yet.

There are a few advantages to hunting the late season as opposed to hunting during October and November. Where snow is present, you will be able to locate deer tracks and the areas where they frequent, such as feeding areas, travel routes, and bedding areas, with ease–allowing you to hunt stands or ground blinds in these different areas where the sign is present. Because deer shift their patterns at this time of year, it may be necessary to relocate some of your tree stands to have different options to hunt and so you don’t over hunt a particular area.

During the early archery season, we spend a lot of time hunting during the early morning hours and later in the afternoon; however, during the late-season, focus on sleeping in a couple more hours and hitting the woods later in the morning, and staying on stand through mid-afternoon. Deer will often feed during these times when temperatures are at a high point. Hunting in stands or ground blinds near food sources such as food plots, agricultural fields, or areas where there is natural browse available will increase your chances of success during these times. Travel corridors or the edge of cover next to these food sources can be excellent places to set up.

Even though the vast majority of does have been bred by the time the late season comes around, there is always the chance that a few are roaming around the woods that haven’t been. You can take advantage of this window of opportunity when they come into heat again by dipping scent wicks into doe in estrus scent and hanging them on trees around your set up. You could also create a mock scrape underneath a low lying branch nearby. Using a doe bleat call periodically will also help lure in an unsuspecting buck.

Since all of the leaves will be off the trees and the temperatures will be a lot colder than the early season, you might want to consider hunting from a ground blind instead of a tree stand. A ground blind will protect from the wind and also conceal you from the keen eyes of a whitetail. It is essential to brush in your ground blind with natural material from around the area. Breaking up its silhouette will allow you to go unnoticed, drawing deer in to within shooting range. Also, set the blind up several days before deciding to hunt out of it, giving the deer time to adjust to the change in their environment and allow any unwanted scent that you left behind to disappear.

Consider heading into the woods one last time with bow in hand during the late archery season. It’s a great opportunity to fill those tags that have been burning a hole in your pocket.