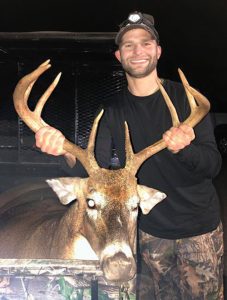 Tyler Schneider got into his tree stand later than normal because of the traffic on October 16. It was cold and quiet; he hadn’t seen much the past few nights. After a couple of hours, it was close to dark when he saw a doe running toward him. Just seconds later, a buck appeared from the thicket chasing her. He knew he was big, and he tried hard not to focus on the antlers. As they both trotted closer, Tyler was able to draw his bow. At 20 yards, he grunted, stopping both deer, and Tyler took the quartering shot. He was full of excitement and nervousness as he and his father-in-law, Wendell Hutchinson Jr., tracked the buck, a short 85-yard blood trail. Tyler commented, “It was an exciting night for both of us; it was my first 8-point in the books, an awesome and exciting experience. I’ll never forget it! I’m truly blessed; I had never seen this buck before. I was so shocked.” 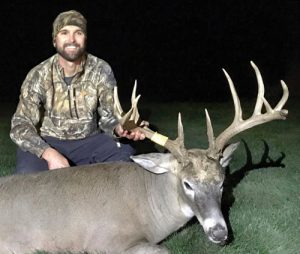 Like most deer of this caliber, it started with one good trail cam photo of him in July. That was the only good photo Kal Ustishen had of this wide 14-point Saginaw Co. beast. He never really thought too much of him because he never thought he would see him again. Fast forward to the opening day of bow season, sitting in his stand that was the best for the wind that evening, getting soaked by the rain, wondering why he even washed his hunting clothes. Kal saw this buck that evening over 100 yards away. The buck came out into the field with a group of does. Kal watched him walk through the binoculars and gave him the name “Grandpa.” Kal said, “I was in shock that he was even in the area. So I was on a mission to get this buck. I hunted him as smart as I could because I didn’t want to push him away. The area is heavily hunted, so I knew if he was moving in daylight, other hunters would also see him.” Kal would end up having three encounters with this buck, and the third time he entered the field 30 yards away, and the chase was over. Kal commented, “I am truly blessed to get a buck of this caliber in the area I hunt. A lot of credit goes to fellow hunters and Misteguay Creek Deer Management Cooperative that are passing younger bucks in the area.” The Saginaw County record book buck had 14 points with a 19-inch inside spread.