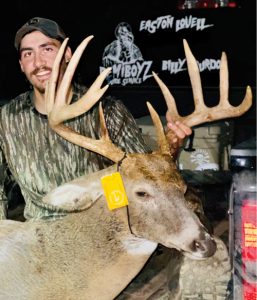 Easton Lovell had been hunting the 11-point buck (photo right) since he had trail cam photos of him in velvet and began his attack plan in August. His dad named him “The Kash Buck” after Easton’s son, born on the turkey season’s opening day this year. Easton felt extremely confident he had this buck’s pattern down. Easton said, “I thought for sure it was a done deal opening day. I knew he was bedding close, so I didn’t try to chance slipping in there to hunt him in the morning. So, I went to work and hunted the evening, but he never came through that night like he had been. After playing cat and mouse for nine days, I finally got a shot opportunity at him and connected.” He had a 19 3/4 inch inside spread with an average mass of 4 3/8 inches. 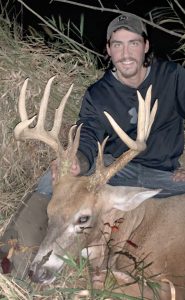 His main beams were 22 and 21 1/8 inches long. The second buck (on the left) showed up once on Easton’s Tactacam trail cam at 1 a.m. And he didn’t think much of it until he saw day time photos of him on Oct. 12 and 13. The wind was right for an afternoon hunt on Oct. 14. Easton again felt confident. “I figured he was bedding about 100 yards away, and right before dark, I saw a buck. At first, I wasn’t sure if it was him or another buck I’d seen regularly in there. He made a big scrape and thrashed a couple of trees, and as he emerged out of the brush, I knew it was the buck I nicknamed “The Godfather.” He came down the trail toward me and gave me a 20-yard shot. The Godfather was a main-frame 10 with a double brow on his left side and a triple brow on his right side.