As part of my Peace Corps training in Costa Rica, I had to find my way to a small town and interview local farmers. Shortly after my arrival, I met another volunteer, who told me she woke up one night, and her hand felt like it was burning. When she turned on the light, she found a tarantula in her bed. When I returned to my room, I pulled my bed into the middle of it and lay there with all the lights on, nervously watching the floor around me for any sign of movement. I know it’s irrational—even silly—but I am afraid of spiders, particularly big ones.

We don’t have really large spiders here in Michigan—they are restricted to warmer climates. However, I was surprised to learn that dreaded black widow spiders are living and breeding successfully as far north as Pellston. According to Michigan State University, the northern black widow, Lactrodectus variolus, lives throughout Michigan’s Lower Peninsula. Until recently, our only known dangerous native spider (a new arrival, the brown recluse appears to be slowly moving in from the south), the black widow really packs a punch—drop for drop, black widow venom is fifteen times more powerful than that of a rattlesnake.

But thanks to antivenin and modern medical care (https://www.livescience.com/46761-venomous-spiders-necrosis-human-tissue.html), deaths from black widow bites in Michigan have declined to zero since the 1950s. After many hours of research, I couldn’t find a single recorded human death from a black widow in Michigan ever. Between 2000 and 2008 of over 23,000 black widow bites reported in 47 states no one died. 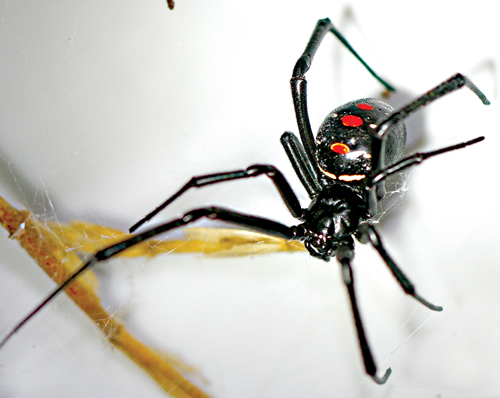 Oddly, the end of the outhouse has contributed to this change. Men sitting in outhouses (where widows especially like to nest) were occasionally bitten on dangling, tender body parts, where thin skin and lots of near-surface blood vessels meant venom quickly entered the body, according to a 1942 report in the (http://www.ncbi.nlm.nih.gov/pmc/articles/PMC1543838), Annals of Surgery. Hunters whose camps still have outhouses might want to keep this in mind.

There are several species of poisonous widow spiders in North America, each with behaviors adapted to its particular habitat. Michigan’s black widow prefers to live in old stumps, waste areas, hay bales, outhouses, and woodpiles. However, it sometimes migrates into buildings in cold weather or is inadvertently carried inside with firewood. Once the black widow enters a barn, cabin, storage shed, or home, she will seek a suitable place where she can overwinter, much like a hibernating bear.

The female black widow, about an inch-and-a-half long (including legs), spins a coarse, sprawling web in a dark, often damp area that serves to capture insect prey and as a place in which to hide and lay her eggs. The black widow is generally a shy creature, but if she is touched, her web is disturbed, or her eggs are threatened, she will not hesitate to bite.

Only the adult female is poisonous, and she is typically shiny black and has a round abdomen with two triangular red marks, a “split hourglass” on it. The male is about half the size of the female and lacks the red markings. However, he is rarely seen because, after mating, he is usually eaten by the female—hence the name, black widow.

Unlike the praying mantis, who, believing her mate is a better lover if he doesn’t think about it so much, bites his head off during the act, the black widow courteously waits until she has been fertilized before devouring her partner. It may be that she’s become very hungry and needs the extra protein to give her developing eggs a nutritional boost. Apparently, if a female is well-fed, the male may escape.

The black widow lays from 250-700 eggs in round white sacs and produces up to nine sacs per summer. After incubating for twenty days or so, most of the young eat each other, leaving only a dozen or so survivors that mature in two to four months, depending on how much food is available.

No one knows how many people are bitten by black widows each year, although over 13,000 spider bites (by all species) were reported to the American Association of Poison Control Centers in 1997, with ten percent of them considered moderate or severe. Although black widow venom contains a powerful neurotoxin—a chemical that attacks the nervous system—its jaws are tiny, and often the bite itself isn’t felt or feels only like a pin-prick. Swelling and increasing pain soon follow, and two tiny red punctures may be visible.

Pain becomes intense in 1-3 hours and may last up to 48 hours, progressing from the bite area to the abdomen and back. Symptoms include; pain in the abdomen, legs, lymph nodes, nausea, high blood pressure, sweating, convulsions, unconsciousness, and, very, very rarely, death from respiratory paralysis. Most people recover from black widow bites within a week, and even though only about one percent of bites end in death, anyone under 16 or over 60 or with heart problems is at greater risk.

Unlike Florida’s northern black widows (Florida boasts four different poisonous widow spiders), which spin webs between trees at about human-eye height, Michigan’s black widows prefer to lay low. Though they are definitely around, it’s unlikely any of us will even see one, and extremely unlikely any of us will be bit by one, although any suspicious spider bite should be reported to your doctor or poison control center.

For those with truly incomprehensible tastes, live black widows can be purchased as pets online at Etsy for $16 each. But why?