I’ve been after this buck since the day he showed up on my trail camera in early October. It was hard not to go into his area every time I went out, but I was patient and tried to play the wind. I wasn’t even planning on hunting Tuesday, Nov. 3 with the warm weather. However, I got a call from a friend that said he thought they were going to run the corn off of a field nearby, so I decided to go out. They never ended up cutting that field, but it was an intense hunt from the minute I got into the stand. 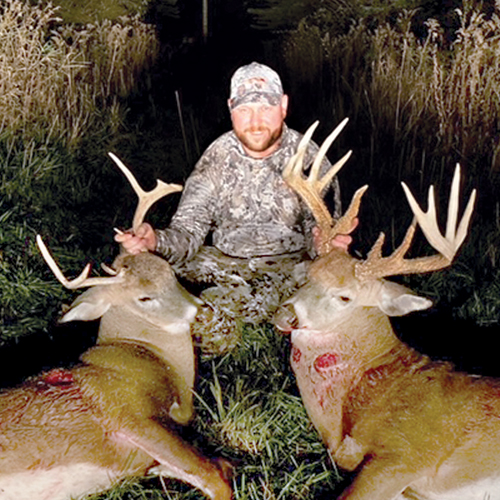 The first deer to come by was an out of range doe. Then it was a parade of bucks back and forth all night. I had to have seen at least 10 different bucks. They were hanging out all around me sparing with each other. I had a spike and a 4-point in front of me when a 6-point came in from behind and chased them into a thicket. I could hear the small bucks coming back like they had done three times already. The 6-point was the first to step out at about 15-yards, then the 4-point and two spikes.

They all stood around to my left (downwind). The BIG guy showed himself, but was walking north still in the thick cover. I had no shot until he got to about 40 yards facing away from me. It looked as if he was going to go right back into the thicket. He stuck his head out to the left to smell a scrape (exposing only his head and neck). I knew that was probably the only opportunity I was going to get, so I took the shot. With all the deer around me I didn’t dare change my sight to 40 yards. I left it at 20 and aimed a few inches high. When I released the arrow my lighted nock turned off about half way to him. So I wasn’t 100% sure that I even hit him. You can imagine I was a wreck not knowing if I got him or not.

I sat down and texted a friend to explain what had just taken place. He couldn’t read half of what I was trying to text because I was shaking so bad! I finally nocked another arrow and hoped that maybe the big 8-point I had seen earlier would come back around. The bucks just kept coming and I see the 8-point! He entered the thicket about 80 yards away so I couldn’t see him anymore but I could hear him coming my way. I got ready, drew back and the second he cleared a big pine tree I took him. I waited about 20 minutes and got down to see if I could find my arrow. I found it sticking into the dirt with barely any blood and I immediately thought I had skimmed him. I looked to the right where he had gone and blood was everywhere! I backed out, went and got my other arrow and then went to my truck.

I called my friend and explained what had happened so he offered to come out and help. When he showed up we went after the big one first. He only went 50 yards. We both couldn’t believe our eyes! After admiring him for a minute we went after the other one and when we found him, it wasn’t the same deer that I thought he was. I was still just so pumped that I had killed the biggest buck of my life, all I could think about was getting back to him! So much had happened and so many emotions. I’m so thankful to have harvested these two great Michigan bucks. He is by far my biggest buck ever! Shot with a compound bow on 10 acres private land in Kent County.