Someone recently told me that he was upset with the fact that the “Base License” in Michigan’s hunting license process now forces him, in reality, to purchase a small game license when his only real outdoor interest is deer hunting. He felt he was being forced to purchase something entirely useless in his regard. My response to him was to go small game hunting and get his money’s worth because he didn’t know what he was missing. 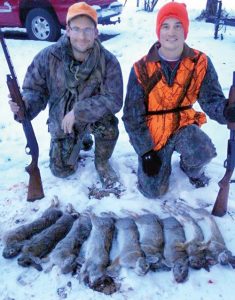 A well-planned rabbit drive can often put plenty of bunnies in the cooking pot.

I don’t have a problem with the Base License issue, and it just might be an incentive to get more folks involved in small game hunting, which in recent years has seen a loss in numbers per hunter participation (deer hunters in Michigan now outnumber small game hunters almost three to one). I do dearly love small game hunting, and my winters would never be the same without the presence of the cottontail rabbit in my home Thumb area.

Growing up on a Thumb area farm (and I am the fourth generation still living there), I have a long association with the cottontail rabbit, a wild, carefree critter that I much admire, and it was the first game animal that I ever harvested. This occurred when I was a kid and had just finished my morning chores at the barn and returned to our farmhouse. When I walked past the corncrib, a cottontail flushed from near it and headed lickety-split to our orchard nearby. I went to the house and obtained permission from my mother to hunt the rabbit down, grabbed up my single-shot .410 shotgun that had once belonged to my grandfather, and a couple of (paper in those days) shells.

Fresh, fluffy snow had just fallen during the night, and it didn’t take me long to locate and get on the fresh rabbit tracks that made a meandering course through the orchard, and for me to sort matters out. The tracks ended at a pile of snow-covered, pruned apple tree branches, and I held the .410 at port-arms and gave the pile an abrupt kick.

The rabbit suddenly flew out like an airborne jack-in-the-box and hit the ground and was airborne again in a mighty leap when the .410 barked, almost of its own accord, and the headshot rabbit dropped on the spot. Everything on my shooting part had been purely instinctive, and maybe it was simply a lucky shot. Just the same, I was forever after a smitten rabbit hunter, and I have used that particular tracking technique (as well as the same old .410 on frequent occasions) for rabbit hunting after fresh snow ever since.

My mother would soon after this memorable moment direct me on how to properly process a rabbit for the table (in her words -“you shot it – you cut it up – and learn to do it right”). Rabbit meat is very lean and fat-free, but when you dip and heavily coat it in spiced pancake batter and fry it up in butter, it kind of defeats the fat-free purpose. Despite this fact, it is one of my favorite rabbit recipes (which there are many, including our favorite rabbit noodle soup – cottontails are extremely good and delicious to eat).

In time I would be introduced by friends to pursuing rabbits with hounds (most notably beagles), a very time-honored pastime, and I have ever since owned beagles for the purpose (although I use them for pheasant hunting as well – beagles are a very versatile and infectiously happy breed that vocally refuse to be left behind whenever my Brittany “bird-dogs” are turned out of my kennel). There is nothing quite as unique as listening to beagles singing in chorus on a hot rabbit track during a frosty and wintry atmosphere. If you have never witnessed this melodious moment, you are truly missing out on one of the most exhilarating experiences in the outdoors. Hounds baying on a fresh track have a way of quite literally drawing your soul into the hunt, and it is an association as ancient as the relationship of humans with dogs. Maybe you will bag the quarry, and maybe not, but it is the close and very personal bond shared with your canine hunting partners in the field that truly matters in the end.

Whenever I decide to add a lot of rabbits to the pot, so to speak, I perform a well-organized rabbit-drive, also an ancient hunting technique as old as human being hunters. The real key here is in knowing your ground, which in this case, I always refer to as being “rabbitat” (and it can often be nastily dense and snarly, briar-infested cover). Standers need to be placed at pinch-points and in obvious funnels towards known places of refuge for hunter-wise cottontails. Drivers then move through the cover in an organized manner that shakes the highly wary cottontails loose and on the move (hopefully in the right direction). It can be a very productive method, minus any dogs.

In my case, however, I prefer to use dogs as well, and any flushing breed will work, such as Labrador retrievers, even terriers (I once had a dachshund that was a real jewel), and I have never hesitated to use Brittany spaniels (my preferred bird dog breed) as well. My old beagle “Boomer” (who recently passed away), of course, never wanted to be left behind and had learned to know the difference between an organized rabbit drive and when he could be, well, a typical beagle (he also knew when he was a “bird-dog” – beagles are a very unique breed). I am presently using a female Mountain Cur and a female Black Mouth Cur as my primary hunting dogs, and they have proven to be very versatile and take flushing rabbits in stride.

And of course, I am one of the pooches too, as I dearly love working with my dogs and driving rabbits to the waiting standers. Hearing gunfire is definitely music to my ears, and despite who does the shooting, it is a teamwork effort shared by all, and I do love to eat rabbit, a very distinct wintertime flavor for me.

I typically do not mess with the cottontails on my farm until our family Christmas gathering, which suddenly catches the rabbits a bit off guard, and if the weather is working in our favor, the action can be fast and furious during our first rabbit drive. I’m old school and still use collar bells on my Brittany spaniels, and I have discovered the bells dinging and tinkling away assist in rousting rabbits, and the “Brits” seem to instinctively know we are after rabbits during a drive, and not pheasants, and even retrieve downed bunnies.

As was expected, our Christmastime family rabbit drive last year netted a bunch of rabbits, and when you are working with two Brittanies, two “cur dogs,” and even a Russian Laika, too, you can readily scour out through the dense “rabbitat” cover, and move some bunnies! The key, then, is for the standers to hit their mark on often fast-moving targets and let the dogs afterward nuzzle and even retrieve downed rabbits, an important part of the hunting ritual. I will never forget hearing my 10-year-old grandson, Orlando, yelling in a panicked manner because he had unknowingly picked up a dead rabbit before my female Mountain Cur, Jilly, could retrieve it, and she still wanted to retrieve it and was leaping all around a startled kid! But they managed to work matters out (Orlando dropping the rabbit was a good start).

We’ve often had a lot of rabbits to dress out after a successful rabbit drive (I remember the Christmas we had 19), which can be similar to an assembly (or should I say “disassembly”) line. We always wear rubber gloves to do this because rabbits roam around, live in, and even gnaw on poison ivy, which can easily be transferred from their fur to your hands, even in winter, and we also never do any of this indoors because a lot of fleas can suddenly wake up on dead rabbits when they are in room temperature (the same applies to squirrels).

Wherever you live in Michigan, which for a fact has bountiful public land available to all, you are never far from true “rabbitat.” (I’ve had some fine rabbit hunts not far at all from major cities). Learn to recognize and take advantage of it, and doing so will certainly shorten up long winters and add some great outdoor adventures (not to mention delicious meals) to boot.