Groundhog Day, the day we saluted that false prophet of spring’s approach, has passed. At this very moment, unless there is a sudden heatwave, most Michigan groundhogs are still in their burrows. During hibernation, their heartbeat slowed from 80 beats per minute to 5 beats per minute; their respiration rate reduced from 16 breaths per minute to as few as two breaths per minute. Their body temperature dropped from about 99 degrees Fahrenheit to as low as 37 degrees.

But even as groundhogs snooze for a while longer, we creep towards the warmth of spring even though the stormiest days of winter may still lie ahead. We all have our favorite signs of spring’s approach in the waning days of February; mine are the booms and crackles of lake ice sometimes accompanied by increased vocalization of barred owls. However, it’s the false prophets of spring that seem to draw the most attention. Two are highly visible during February, and one is not. We’ll start with the eastern bluebirds, perhaps the most attractive and visible false prophet.

The appearance of eastern bluebirds is often looked at as the formal proclaimer of spring. That may hold some truth in the Upper Peninsula, but many, if not most of these beautiful birds overwinter in Michigan, especially in the Lower Peninsula, and are hidden in our midst.
Henry David Thoreau famously wrote, “The bluebird carries the sky on his back.”

No one can dispute that fact when they see an eastern bluebird’s brilliant backside on a frigid winter day. But what is rightfully disputed about bluebirds is an 1859 quote from Thoreau, “The bluebird comes and with his warbles drills the ice and sets from the rivers and ponds and frozen ground.”

Perhaps back in 1859 when winters were more severe that held more truth, but hardly a winter’s day does not go by in my part of Michigan that I do not see eastern bluebirds hunkered down in thickets or at the edge of my swamp. Both sites offer shelter and an abundance of treats; wild grape, dogwood, and poison ivy berries. Before maple sap begins to drip, most of “my” bluebirds make a “migration” of several hundred yards to bluebird boxes on fence posts in my meadow. And that is when someone that does not watch the ways of nature closely might proclaim, “The bluebirds are back!” not knowing they never left.

Is it time to put away the heavy parka and ice fishing shanty because you saw robins in early February? Probably not. The myth that robins appearing in winter means spring is almost here has more lives than a cat’s nine lives. American robins are adaptable birds and do just fine in near blizzard conditions. Many do not migrate at all, while others will go just far enough south, be it a few miles or a few hundred miles, to find a location with winter food supplies. They often form flocks of two or three dozen and spend much of winter in sheltered areas harboring dried berries and fruits. I have robins all winter that feast on dried sumac seeds and perhaps hibernating insects in the clusters. On sunny winter days, they bask on branches. Once lawn snow melts, they suddenly reappear more publically, especially in suburban areas where they hop about on their hunt for worms, fueling the myth that robins are back. And that’s when local TV announcers embrace the false prophet with near breathless reporting of a sighting of the “first” robin of spring. 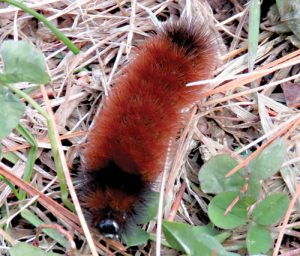 The false prophet never seen in February is the woolly bear caterpillar, the smallest false prophet of spring’s arrival time and the least accurate. Back in October, woolly bear caterpillars crawled about the forest floor and crossed roads, searching for a place to hunker down for winter. That place usually ended up under a decaying log or thick carpet of leaf litter.

According to “woolly worm” watchers, the falsehoods go something like this: The amount of black on the woolly bear in autumn varies proportionately with the severity of the coming winter. The longer the woolly bear’s black bands are, the colder and more severe winter will be.

Similarly, the wider the middle rusty brownish orange band is, the milder the upcoming winter may be. Some even claim if a woolly bear is crawling northward, that indicates a mild winter, and if it’s crawling southward, it’s fleeing — (rather, slowly I must add) to escape a frigid winter looming the horizon. Science facts are even more intriguing than that myth. Just as the temperature began to plunge, the woolly bear creates a substance called glycerol, which essentially in an organic antifreeze that prevents their inner cells from freezing. In early spring, they thaw out, awaken, build cocoons and emerge a few weeks later as Isabella Tiger moths.

The National Weather Service does a superb job of debunking woolly bear myths this way. “Even though it is widely believed that the woolly bear caterpillar can predict the upcoming winter’s severity, the truth is that this caterpillar can’t predict what Old Man Winter has in store for us in winter. The woolly bear caterpillar’s coloring is based on how long the caterpillar has been feeding, its age, and species. The better the growing season is, the bigger it will grow. This results in narrower red-orange bands in its middle. Thus, the width of the banding is an indicator of the current or past season’s growth rather than an indicator of the severity of the upcoming winter. Also, the coloring indicates the age of the woolly bear caterpillar. The caterpillars shed their skins or molt six times before reaching adult size. With each successive molt, their colors change, becoming less black and more reddish.”

So who are the true prophets of spring that confirm its arrival?

My vote would be for the first flights of honey bees, or the sudden eruption of spring peepers jingling like thousands of tiny sleigh bells in the swamp behind my house. But we all know spring is really here when we stop wondering when it arrives, and just come back home from woodland adventures with mud on boots and smiles on our faces.

Jonathan Schechter lives in Oakland County and is waiting for spring in the accompaniment of robins and bluebirds oaknature@aol.com