the Search for Michigan’s GHOST CATs 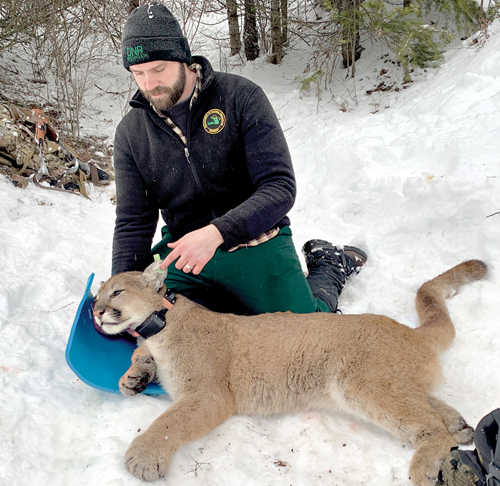 Cody Norton, the Michigan Department of Natural Resources’ large carnivore specialist, handles a cougar as part of training the DNR cougar team received on how to tranquilize and handle cougars.

You may have read the stories here or on social media platforms. Tantalizing and captivating claims from across Michigan: cougars seen wandering backyards in the suburbs around Detroit, black panthers skulking through farm fields, and attacks all over the state on pets and livestock.

But what’s the truth about mountain lions in Michigan? How many are there? Where are they? And how worried should we be?

Cougars, also called mountain lions or pumas, are native to Michigan and would have been found here before European colonization of the region. However, early European settlers saw the cat as a threat to them and their livestock, as well as a competitor for venison and other wild game. Consequently, by the late 1800s, cougars were almost eliminated from the eastern United States, driven by these fears. Wholesale logging of the forests the cougars called home also played a role, as waves of settlement converted much of the state to farmland. Many states and the federal government created bounties, money paid to people to kill cougars and other predators, intending to erase them from the landscape. These efforts worked so well that cougars were eliminated from Michigan by the early 20th century.

While memories of these big cats persisted in communities across the state, trying to find physical evidence to support reported sightings proved to be a bit like chasing a ghost. When evidence was collected at the scene of a reported cougar sighting, like photographs, the culprit was often found to be something other than a mountain lion. These would-be cougars were animals as mundane as a large housecat seen from an angle that made it appear much larger or as unusual and exotic as an escaped pet serval – a large wild cat from Africa that’s definitely not legal to keep as a pet in Michigan.

As reported sightings became more common, the Michigan Department of Natural Resources created a “cougar team” in 2008 to review reports of cougars and to try to verify them. Brian Roell, a DNR wildlife biologist at Marquette, takes the mission of the cougar team very seriously.

“The team is made up of wildlife biologists for the DNR who have received specialized training in how to identify cougars from photos, as well as from tracks, scat, and other physical evidence they may leave behind,” Roell said. “It’s important that we’re able to identify these animals correctly, not just for conservation purposes but also so that residents can be informed about the wildlife living around them and take commonsense precautions.”

Over the 13 years since the formation of the cougar team, its members have met weekly to review reports with supporting evidence submitted to the DNR. If the evidence appears to have come from a cougar, DNR staffers will follow up with a site visit. This helps the biologists verify that photos haven’t been faked or reported from false locations. The visits also let the biologists measure trees and other objects to help estimate the size of animals in photos submitted with reports. Sometimes, the team members even use a life-sized, cardboard cougar silhouette to recreate the photo to help arrive at a correct identification.

So far, their hard work has verified 65 cougar reports in Michigan.

“We don’t think these are all different cougars,” Roell said. “Many of these reports include photos from trail cameras, and the same cat is likely being spotted in different places as it moves through the forest.”

What does this tell us about how many cougars are in Michigan?

“There’s no evidence of a breeding population here – no signs of kittens in any verified report, and all of the animals where we’ve been able to determine their sex have been male,” said Kristie Sitar, DNR wildlife biologist at Newberry.

Sitar said some DNA studies have been conducted on the cougars found here, using evidence collected from verified reports or a cougar poached in Schoolcraft County several years ago. This testing has shown the animals being reported in Michigan have traced back to a population found in South Dakota, Wyoming and Nebraska.

“These are likely young male cougars looking for areas far from home where they can find mates and establish their own territories, and they just keep moving when they don’t find any female cougars,” Sitar said.

Should you be worried about seeing a mountain lion near your home?

All but one of the verified cougar sightings the team has reviewed have been from the Upper Peninsula. The chances of seeing one in the Lower Peninsula are extremely low. Like with most wildlife, there are some simple preventative steps you can take to make your home less attractive to cougars.

Remove sources of food, shelter, and safety. For cougars, this means not letting pets roam outside alone, providing shelter for livestock, not feeding wildlife, removing landscaping that provides shrubby cover for animals to hide in near buildings, and installing outside lighting with motion detectors.

If you encounter a cougar when you’re outdoors, your best bet is to try to appear too dangerous to tangle with: don’t turn your back on the animal, look as large as you can by standing tall and waving your arms, and talk loudly.

Never run from a cougar, though you can move away slowly. If you are attacked, fight back and never play dead. Remember that the likelihood that you’ll ever see a cougar in Michigan is extremely low, and the likelihood of an attack is even lower.

“These cats are very rare in Michigan,” said Pete Kailing, a DNR wildlife biologist in Paris. “Much of the data we’ve been able to gather so far is thanks to the willingness of Michiganders to share their photos and other evidence with us.”

If you’re interested in learning more about cougars in Michigan, Kailing suggests starting at Michigan.gov/Cougars, where you can find tips on how to tell if the animal you’ve seen is a cougar, how to report a cougar sighting, and the current status on where cougars have been confirmed in Michigan.