Last spring, Michigan wild turkey hunters had a success rate close to 45%, which is simply fantastic. But just when I thought populations were reaching a peak, Mother Nature served up a pleasant surprise. Spring 2020 had an abundant poult hatch, and out of the deep woods, there suddenly appeared large groups of hens with impressive flocks of poult in tow. Sure the kill was up last spring, but this coming spring, it should be even better, easy hunting providing Michigan hunters with fast-paced turkey thrills.

Keep in mind I spend most of my time in central and southern Michigan, where private land and rich agricultural areas keep birds protected and well-fed. The last few years, we have had unusually warm winter weather, not much snow, and wild turkeys have survived in excellent condition. As populations grow, you can expect new properties to offer great hunting opportunities. However, old gobbler haunts should still produce big results.

Hunters, landowners, and biologists report increased turkey sightings this last fall and winter. To sweeten the pie, there are abundant huge bearded toms mixed in, and you can anticipate the overall population to be impressive come opening day. Hunters can expect fun-filled wild turkey hunts this spring, and chances of taking a big ol’ gobbler are better than ever.

Last year was simply amazing. The weather was perfect, warm and dry, with temperatures ideal to keep gobblers moving. I spent many days in April chasing big toms with telephoto lens, and last spring, they went berserk. Each morning was highlighted by robust gobbling, plenty of wild turkey activity, and intense competition between breeding toms. The action built to a fever pitch in late April, and I was surprised to see excellent gobbler activity throughout the late season. Nothing is more exciting than loud morning gobbles and multiple toms struttin’ their stuff every time you are set up.

I’m happy to live and hunt in southern Michigan, where turkey numbers are booming. The DNR has done an outstanding job of introducing turkeys throughout southern Michigan, and as natural reproduction takes off, the gobbler is quickly expanding, and big toms with 10-inch plus beards are common thanks to local farmers, rich agricultural areas, mild winters, little hunting pressure and somewhat limited seasons. 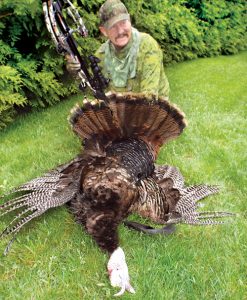 Michigan is blessed with fast-growing wild turkey populations with plenty of big gobblers mixed in. The author admires a big tom with a 12-inch beard. He feels the DNR should stop charging sportsmen who apply for turkey permits and open statewide turkey season with two-gobbler tags.

In the old days, you had to drive into northern Michigan to find good turkey hunting. Today the best spots are kissin’ close to major metropolitan cities like Lansing, Benton Harbor, Kalamazoo, Grand Rapids, Battle Creek, Ann Arbor, Pontiac, Flint, and Saginaw. I’ve found solid populations with long beards aplenty near Mt. Pleasant, Lapeer, Stanton, Ionia, St. Johns, Charlotte, and Hastings. My point is you can concentrate on hunts close to home, or at least in southern Michigan, where big gobblers are plentiful.

Michigan’s early winter 2021 was mild with little snow. Wild turkeys could forage just about anywhere they pleased. Some flocks gathered in agricultural fields that offered corn, soybeans and other food sources. Many counties had a robust crop of acorns. The forest floor under many oak trees was littered with acorns aplenty, and local herds of deer and turkeys spent most of their time foraging on the nutritious fruit. Some counties had so many acorns that local turkey populations and deer remained deep in the forests and hardwoods and rarely ventured out to agricultural sources. Mild weather, little snow, frequent thawing weather, and abundant acorns spell excellent turkey survival, and plenty of big toms available come opener.

I love chasing monster gobblers with beards dragging on the ground. I scout year-round and get serious about nailing down hunting permission long before the opener. One hotspot is near Berrien Springs, where a huge tom with a 13-inch beard lives along the banks of the St. Joseph River. I frequently mix turkey scouting with steelhead or walleye fishing trips on the St. Joe. This area is blessed with ideal turkey habitat, rolling hills, thick swamps, agricultural fields, oak ridges, and woodlots full of wild turkey roosting trees. The private land gets very little hunting pressure, and the turkey numbers keep climbing.

I wish I could recommend spring turkey hunting on State Game Land, but unfortunately, populations are stumbling. I’m confused about the loss of birds on most public land I visit. I’ve spent years chasing wild turkeys in the Dansville State Game Area. Years ago, monster gobblers were stocked there by DNR biologists. But as time rolls on, the turkeys have simply disappeared. The MDNR has then stopped planting corn and soybeans to feed wild game, which explains why populations are outrageous on surrounding private farms, and few turkeys reside on state ground.

Savvy hunters scout in early spring, locate gobblers and knock on doors to get hunting permission. Your chances at getting thumbs up for spring turkey hunting are much higher versus deer. Some private deer camps will let you use their posted private property for spring turkey hunting. I have a rich friend who leases land for deer, pheasant, rabbit, ducks, and he tosses cash at farmers and landowners and gets permission all the time, wherever he wishes, but some leases cost more than others.

I chase monster gobblers year-round with crossbow, gun, and telephoto lens. I’m always scouting and locating new populations and trophy toms regularly. I ask permission months before the opener and have several properties where I can roam free. My run-n-gun strategy gives me increased opportunities at boss gobblers, and I have more flexibility deciding where to hunt. Some mornings are spent road hunting with a telephoto lens and checking properties where I can hunt. I like to spot a big tom, hide the vehicle and sneak/stalk within calling or decoying distance.

When I set up, I use a full-fan decoy that is customized. I cover a Primos Killer B decoy with feathers from head to tail using a hot glue gun. The fake tail gets tossed, and I replace it with real wild turkey tail feathers. The Killer B round stake will rotate with the wind and gives the fully fanned decoy unbelievable gobbler attracting power. have to tell you, they come running to my setup. I’m after a monster gobbler with a full fan and long dragging beard, which means I pass on plenty of jakes and young gobblers that charge my decoy. Sometimes I have to stand up and chase away sex-crazed gobblers intent on jumping on my decoy. Every year I replace decoy tail feathers due to multiple gobblers beating on the fake bird with a feathery coat. The secret to my fast-paced turkey encounters hinges on scouting, finding a dandy tom, slipping into the kill zone, setting up a realistic decoy, and making a few yelps. Some mornings, I prefer to be set up before dawn and fool roosting gobblers and catch them off-guard at the crack of daylight. But to be honest, most of my kills come mid-day when toms are looking for receptive hens, vulnerable to calling, and rush a sexed-up looking decoy. There are so many gobblers this spring that I’ll probably have to protect my prize decoy with a suit of Kevlar.

Most gobbler-crazed hunters scramble to be the first gun in the woods, and they enter the DNR drawing. Not me; I prefer to hunt Unit ZZ or purchase hunt Unit 0234 and let the woods green up, allow grass to grow and leaves to sprout. During the late season, the landscape offers lots of cover that is pure green. I wear a custom hand-painted camouflage suit, spray-painted with Rust-Oleum Ultra Cover Eden Satin spray paint. I don’t just match my clothing to the green environment but spray paint my mask, boots, gloves, and Benelli shotgun.

Most of the Thumb is private land with rich agricultural fields mixed with woodlots and oak ridges which is ideal habitat for wild turkeys. The population is on the rise here, too, and you can expect plenty of boss gobblers throughout the Thumb.

Gobbler numbers in the 13 county areas that make up Michigan’s turkey Zone K are still fluctuating. A steady decline has occurred, partially due to the baiting ban, which encouraged locals to no longer feed wild turkeys during severe winter weather. However, the numbers increased last spring with the ideal poult hatching, and hopefully, the population will rebound. Some winter feeding programs have helped turkeys to survive, but Michigan’s DNR is not interested in allowing widespread feeding to encourage turkey survival.

Gobbler numbers get higher the farther south you go. While numbers are still strong near agricultural areas near Leelanau, Traverse City, and Kalkaska, southern counties hold more birds. Southwest Michigan is inundated with flocks, and I recommend concentrating on Oceana, Newaygo, and Mecosta counties.

Michigan’s booming turkey populations are fast, giving the Wolverine State a reputation as one of the hottest turkey destinations in the midwest. Spring 2021 is shaping up to be the best season ever, and you can count on seeing an abundance of wild turkeys with plenty of toms and mature gobblers sporting long beards. Are you prepared for turkey hunting? Do you have your decoys ready, plenty of turkey load ammunition, camouflage to match the environment and z I’m predicting there will be plentiful toms available this spring to test every Michigan hunter’s hunting skills.