Tribute to a True Woodsman

There are those certain and often rare individuals who inspire and impact, many times unintentionally, those who are fortunate enough to have been in the “wake” of their lives.

There are those who silently stand tall yet speak loudly by the consistent and honorable manner by which they live. 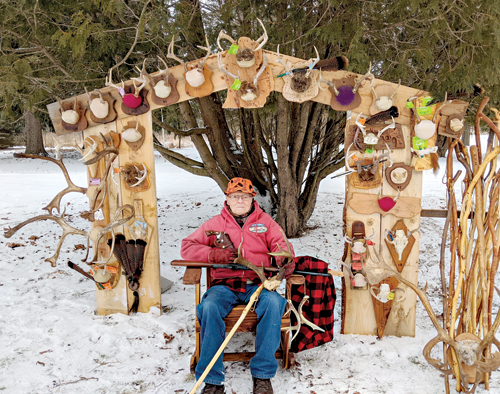 Robert Risley is pictured with a portion of his trophies.

Mr. Robert Risley is one such person. At ninety-one years of age, Bob resides in his country home in Clinton County, Michigan. He and his dear wife, Ivah, who passed away in 2012, raised four children, all of whom are honorable and successful. Their deep faith in God was successfully passed onto their family members. They lovingly refer to their father as “Daddy.”

Mr. Risley is a skilled master woodsman. His greatest pleasures are found in the experiences gathered in the outdoors of Michigan. Adorning the walls of his home shop are “woodland finds” too many to number, each having its own particular story. Maybe it is a set of antlers, a tree limb, a feather, or a unique rock. Each collected and fashioned into something usable or as a gift for a dear friend or family member.

Born in 1930, Bob took a strong interest in hunting and fishing. His love for the woodlands has only grown through the years. Harvesting his first whitetail buck in 1947 with a Winchester .30-30 lever-action, he has carefully preserved and mounted each buck displayed in a prominent place in his home. Interestingly, among his collection are several button bucks mounted and displayed with the same care and pride as any buck he has taken. To Mr. Risley, each deer harvested is a trophy item and carries with it a trophy memory. The processing of the deer is a family affair. Every usable piece of meat is carefully packed away for future use. He has also taken numerous caribou and black bear.

A quiet-natured man, Bob comes alive with excitement and animation with a request to share a story of any of his outdoor experiences to one who is interested. So bring along a hot cup of coffee, a listening ear and enjoy the memorable experience afforded you by this unique gentleman. You will walk away with a satisfying smile.

In a time of competitive hunting and fishing, where criticisms are freely given to those who harvest a certain sized animal, it is refreshing to witness the joy and fulfillment of the simplicity of a true outdoorsman. He is the first one on the scene to offer help to anyone in need. Bob is the kind of man that would pause his hunt to help another find their deer and then be the first to shake their hand. He can fix most anything. When one shares with him the troubling situation, a confident wink of the eye and wave of his hand, Bob beckons you to follow him to his shop where the likelihood of your problem being solved is very high.

As a young man, at the age of ten, Bob lost the vision in his left eye. This in no way hindered him as he achieved the level of expert marksman and was awarded the Expert Carbine Medal when he served in the U.S. Army.

Almost daily throughout both deer and turkey seasons, Bob makes the 200-yard trek to his ground blind, which he constructed from salvaged materials years ago. The floor has a base of Cedar boughs that provides extreme quietness and cover sent. He made a tiny wren house in the blind where the birds will come and sit on his window sill just an arm’s reach away and talk to him. A pleasure Bob thoroughly enjoys. His patience pays off as he consistently fills his tags. Bob prefers to use his Ruger, Security Six 357 caliber, short barrel revolver with open sights by which he consistently harvests his deer. The last three turkey seasons, he has taken trophy Toms with his .410.

His favorite “get away” place to hunt and fish is in his rustic cabin with no running water or electricity in Newberry. Sharing years of experiences with his family, his son, Ron, shares the following memory:

“Of all the memories of hunting with Daddy, this one I cherish above all others:

“In more recent years, it has been just him and me in our U.P. cabin during deer season. As with many people who are losing their hearing, Daddy will unconsciously talk out loud to himself. At night, after the gas lights are shut off, and we are deep into our sleeping bags, I can hear him quietly talking. He is talking to God.”

Several years ago, my son shot a very large buck near Mr. Risley’s home. While on my way to help him trail the brute, Bob was out checking his mail. I shared with him the story, and with complete confidence, he responded, “You’ll find him down on the river flats!”

I asked if he would like to join in on the trailing. “Sure, let me put my mail in the house.”

After a short fifteen minutes of trailing…well…do I need to tell you where we found the buck? Exactly where he said it would be! Bob watched my son gut the deer for a few minutes, then nudged him out of the way and finished the job the “right way.” We couldn’t have been more proud to have him be part of the forever memory.

There are many honorable qualities about Mr. Robert Risley. He is a man of few words. However, when he does have something to say, be sure to listen.

I truly believe that every man, either consciously or subconsciously, “hunts” for an older, honorable man to “go before him,” a man by which he is able to pattern his life. Mr. Risley is one of those individuals. He stands as a tall tree in my forest for sure!