The 11-point typical that Rachel Wheeler from Stevensville shot on opening morning of the 2020 firearms season that scored 176 7/8 wasn’t the only world-class buck bagged in Berrien County last fall, according to Commemorative Bucks of Michigan (CBM). A 16-point nontypical that Thomas Fogarty, Jr. from Benton Harbor shot in the county on the morning of November 18 was also entered in state records maintained by CBM. That massive set of antlers had an official net score of 201 7/8.

Like Wheeler, Fogarty had no idea a buck of that caliber was in the area until the morning he shot it.

“I had a few other bucks on camera that were my number one and two bucks that I was hunting when I got the bigger buck,” Fogarty commented. “It was about 8:30 a.m. when I shot him. He came up out of a creek bottom and over a hill.”

Thomas said he was hunting from an elevated box blind about eight feet above the ground when he got the Boone and Crockett qualifying nontypical.

“I hunt mature bucks, and I could tell this one was a shooter when I saw him,” Thomas said. “I put my range finder on the deer, and it said 153 yards. He was on the opposite side of a pasture. I had my rifle sighted in one inch high at 100 yards, and I’ve shot it out to 300 yards. The rifle shoots well. I was comfortable taking the shot.” 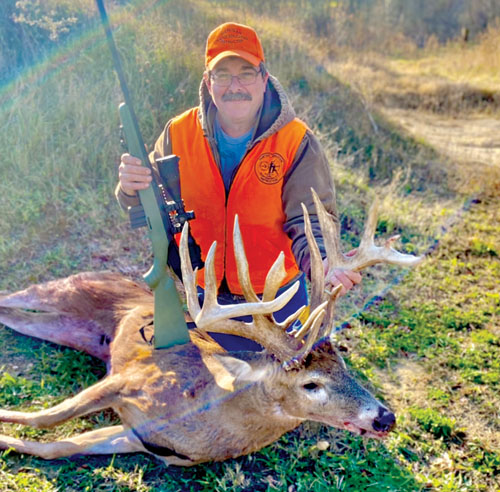 The buck was facing Fogarty, so he aimed for the chest with the variable scope on his rifle set on 9X. He rested the Ruger .350 Legend on the window ledge of the blind and touched one off. The rifle was loaded with 180 grain Winchester bullets.

“He went 40 yards and dropped,” Fogarty explained. “I didn’t know how big it was until I got up to him. I guessed he was a 10-point when I shot him. After I saw he was a mature shooter, I didn’t look at his head again until I walked up to him. He just kept getting bigger the closer I got. He has giant mass all the way around. I was in total awe at the mass and all the sticker points.”

The circumference at the base of the right beam is an amazing 9 5/8 inches, and the left beam measured seven inches at the base, according to the CBM score sheet. Both beams were close to 25 inches in length, and the inside spread is 18 7/8 inches.

Ten of the rack’s 16 points are on the right beam. The buck actually grew 11 points on the right antler, but one of them had broken off by the time Thomas shot it. Although Fogarty never got any photos of the buck on camera, after he shot the whitetail, one of his neighbors shared a photo of the buck captured by his camera when the buck was in velvet.

A drop tine off the base of the right antler when it was in velvet, which was estimated to be six to eight inches in length, had been broken off. Fogarty’s daughter found one other photo of the nontypical on the internet taken after dark on November 15, and that drop tine had been broken off before then.

Fogarty said the buck had a dressed weight of 187 pounds on a scale he owns. He estimated the buck’s age to be at least 5 1/2. It certainly could have been older than that based on the mass of the antlers.

The best bucks to Fogarty’s credit before last fall’s scored in the 130s. He shot a 13-pointer on November 17, 2019, from the same blind where he got the big nontypical last fall that netted 137 7/8. A big 8-pointer that Fogarty got in Van Buren County with a muzzleloader during the 1994 season measured 137 5/8.

The heaviest buck to Thomas’s credit is a 10-pointer he dropped with a shotgun in Berrien County during November of 2008. That whitetail had a dressed weight of 231 pounds. The antlers on that deer scored 134 2/8.