Another Delicacy of May… 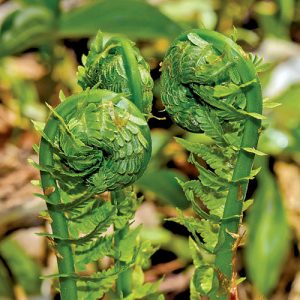 Ostrich fiddleheads as they appear in the field.

May is known as “morel month in Michigan,” but there is another delicacy that makes its appearance this month: fiddlehead ferns. Though not as commonly collected here in Michigan, New Brunswick and Maine produce about 200 tons of fiddleheads for the market every year. (Being very light, that’s an awful lot of ferns.) Fiddleheads, the curled sprouts of ferns, have a very short season for a week or two in May and are the kind of thing you can find in higher-end groceries like Trader Joe’s for $10 a pound, or online at Etsy (currently $82 for five pounds). They can also be purchased frozen out-of-season. Michigan, about the same latitude as Maine, could be as good a source, and urban, chef-run restaurants an untapped market.

And best of all, they are free in the wild woods behind your house! (Ostrich ferns are also a plantable commercial crop.)

Like other wild foods, a little knowledge is required. Of the two fern species most commonly eaten, the ostrich fern (Matteuccia struthiopteris) is safe and delicious. In contrast, the bracken fern (Pteridium aquilinum), though widely collected, is now believed to cause stomach and other cancers. A plus is that you will never find them growing together, as their habitat requirements are completely opposite.

People who eat fiddleheads compare their taste to green beans, asparagus, artichoke hearts, and god knows what all, none of which is true. It’s like the people who say that everything from rattlesnake to guinea pig tastes like chicken. I’ve eaten them, and only the most determined wishful thinking can make them taste anything like chicken. Fiddlehead ferns, steamed, boiled, or fried with a little butter, have a rich crunch and taste like nothing but themselves, calling to mind the forest in which they were found.

Half a cup of fiddleheads contains about 22 calories, 3 grams of carbs, 2.8 grams of protein, and practically no fat, not counting the butter you cook them in. Their deep green color means they are high in beta-carotene. They are also rich in Vitamin C, potassium, and niacin, so they have significant nutritional value.

Ferns are an ancient tribe, dominating the world’s flora about 300 million years ago, well before the dinosaurs appeared. At that time, ferns (and their cousins, the horsetails and club mosses) took the forms of 100-foot trees, the rotted and compressed stems and leaves of which formed the coal deposits we mine today, giving their name to the Carboniferous Period. Reproducing by spores instead of seeds, these plants preceded the flowering species that presently blanket the earth.

Folklore attributed magical qualities to ferns because their means of reproduction, lacking flowers and seeds, is apparently invisible. According to Cunningham’s Encyclopedia of Magical Herbs, ferns have powers related to rain-making, protection, luck, riches, eternal youth, and health—quite a load of meaning for one small plant.

While ferns and their relations have survived into the present, they are greatly reduced in stature. Short tree ferns still exist in special ecosystems like mountains in central Africa and the jungles of Australia. In Michigan, ancient fern fossils can be found at old quarries and exposed shale deposits around Grand Ledge, but permission to collect is usually required.

Today there are an estimated 10,000 to 15,000 species of ferns worldwide, most in the tropics and subtropics, but also throughout the northern hemisphere. Fifty-five species live here in Michigan, from clinging to cliff faces in the U.P. to swamps and sandy plains throughout the state. But as far as edibles go, we are concerned here only with the two mentioned earlier: the ostrich fern and the common bracken fern.

Ostrich ferns are the premier, safe edible fern found in wet woodland environments like seeps and creek, river, and swamp edges. They possess two kinds of leaves that you can’t miss: a cluster of long (up to 5 feet tall), dark green, vase-shaped sterile fronds, and a few shorter, stiff, dark brown fertile fronds covered with capsules where the spores are produced. Though the green portions die down in winter, they rise the following year from a perennial woody “stump” or mound-like rhizome that protrudes above the soil, producing May fiddleheads. The fiddleheads are covered with an inedible, brown, thin, papery husk that must be removed by rubbing or washing.

These ferns are common to the point of weediness and usually indicate poor barren soil. Unlike most ferns (including ostrich), brackens prefer drier old pastures, waste areas, and open, sandy ground. Their stems rise knee-high, the plant taking the form of three large compound “leaves,” each consisting of many tiny leaflets. Rather than a dark brown fertile frond, small spots along the margins of the leaflets produce the spores. The entire plant turns golden in the fall and dies completely back for the winter. Oddly, in May, I’ve often found black morels among bracken ferns. Why, I don’t know.

Bracken ferns are one of the few plants that naturally produce cancer in animals. It is toxic to livestock, and the poison can be passed into milk. Human populations that eat bracken, particularly in Japan and Brazil, show a strong relationship between fern consumption and serious cancers. Scientists have shown that ingesting ptaquiloside, a chemical in bracken, increases the chance of getting gastric and esophageal cancers.

But the danger goes further than this. A scientist in Denmark has shown that the carcinogens in bracken can enter the water supply and contaminate humans in that way. So really, while knowing your fiddleheads before you gather them, you may as well just avoid bracken altogether.