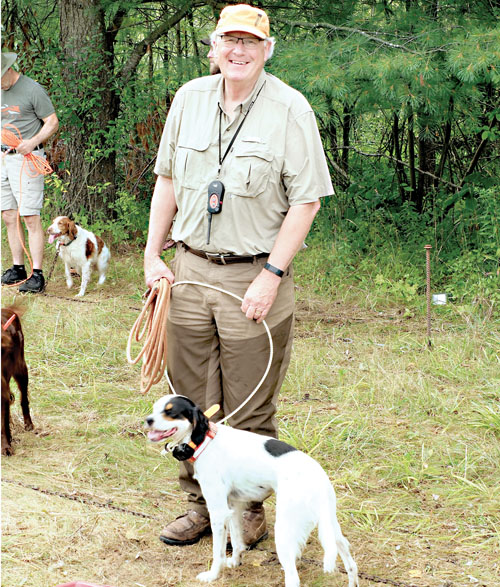 The end of March 2021 brought the end of an era at the Michigan Department of Natural Resources (DNR) with the retirement of Al Stewart after 50 years of service.

Actually, he hit the 50-year mark last year, says Stewart, who was the DNR’s Upland Game Bird Specialist and Program Leader when he stepped down.

“I have 50 calendar years involved with the DNR with 47 years of full-time continuous hours.”

Stewart grew up in the north end of Rochester, Michigan, on Tienken Road before the arrival of the subdivisions, traffic circles and Stoney Creek High School. That was in the days when a family lived in the house at the current Rochester Hills Museum at Van Hoosen Farm. The Stewarts were that family. Next door, the Van Hoosens, who raised Holstein cattle, had opened their dairy store and called it “At the Sign of the Black and White Cow.” It’s now listed on the National Register of Historic Places. When he was a child, Stewart attended a nursery school there.

After graduating from high school, he left Rochester, enrolled at Michigan State University, and wasted no time getting involved with the DNR.

He says, “I started as a student in 1970 in temporary jobs. At that time, I was paid a limited amount through MSU to help at the DNR Wildlife Pathology Laboratory. In 1972, the DNR made me a student assistant. I started full-time in 1977 working in the Thumb.”

DNR Director Dan Eichinger says, “Almost none of us would describe what we do as a job necessarily. Many feel it’s a calling. There’s probably no better summary than to apply that to Al as a 50-year department employee. He was drawn to this work. He has been a present, consistent and stable force who always views the resource first. Always concerned about what’s good for the grouse, the woodcock, the turkey. They remained first and foremost in his thinking.”

Indeed, on his journey through the ranks in the DNR, Stewart played a role in every major modern upland game bird program you can think of: redistribution and increase in the population of wild turkey throughout the state, Szechuan pheasant introduction, Pheasant Restoration Initiative, GEMS (Grouse Enhanced Management Sites), Woodcock banding program and the Upper Great Lakes Woodcock and Young Forest Initiative. He also did “a little work” on the project to try to establish a population of Hungarian grouse in the state.

Stewart says, “I think they all had some success in their own way. Changes in habitat that were impacted at large landscape levels helped to determine the full success of a program. The turkey restoration program is one that I believed would be successful, and it has been a great success. A generalist species like turkeys had a better chance of expanding their population than a species that had very specific limited life requisites.”

Surprisingly, the one program he shares the most memories of is the one the public most likely viewed as “unsuccessful”:

“For the Szechuan pheasant project, I hand-turned all the eggs every two hours. I was directly responsible for nights and weekends as well as working my day job. My family lived on-site, and I had a BIG alarm in the house that went off if the power went out,” says Stewart. If that happened, “I was responsible for starting the commercial generators to power the banks of commercial incubators. Once the chicks hatched, I was required to check on them to ensure the brooder temperatures were correct and no birds died. Also, I had to be sure they had food and water at all times. The facility was at Rose Lake and was a secret location away from the Mason State Game Farm, where the main rearing facility was located. This was to prevent theft of birds or as a disease protection option.”

Stewart’s work in so many areas of the world of upland game bird conservation has earned him a certain standing in that community that Eichinger says will be missed.

Stewart also played major roles in some programs that were not centered on upland game birds.

“For the Osprey Reintroduction Project of Southern Michigan, I wrote the plan and did the first hacking program at Maple River Wetland Area. Kensington Metro Park was the second site. This project has also been a great success.”

Stewart is also proud of the work he began at the Rose Lake Shooting Range while a field biologist.

“When the range was under my responsibility, we took it from a rough gravel pit shooting site to a premier shooting range. Using grants that we acquired, we transformed the shooting opportunities to include rifle/pistol range (various distances), shotgun and archery.”

This effort produced a location to do introductory shooting events for R3 (Recruitment, Retention and Reactivation) activities. He wanted to erect an education building at the site, but the idea got lost in the passage of time and the shuffle of personnel.

“I’d always been disappointed that my vision for the range had never been fulfilled,” he says. “When Dennis Fox became the first DNR R3 coordinator with responsibilities for all the DNR ranges, I approached him about my dream to have a building. We developed some strategies to get a building on-site. The building was recently constructed, and I was able to participate in the ribbon-cutting event. The building is named the Glassen Shooting Education Building and is a location where many resource and shooting training sessions are held.”

(The Hal & Jean Glassen Memorial Foundation, of which Al is the vice president, is a nonprofit that provides financial assistance to various organizations.)

Finally, former Wildlife Division Chief, the late Charlie Guenther, asked Stewart to develop the rules and organize the original Michigan Duck Stamp Program in 1976. Stewart says, “A core to my research and contract design was solely based on input from the late Jim Foote and all the gallery owners and artists that he introduced me to during the process.”

Foote was a wildlife biologist and decoy carver who left the DNR for a career in wildlife art not long after helping Stewart with the contest. They remained friends and bonded further over their love of grouse and woodcock hunting with English setters.

“I have so many fond memories of visiting and staying at the Foote’s cabin in northern Michigan with Jim and (his wife) JoAnne. I always enjoyed the special honey glazed spiral-sliced ham that sat on the table during the hunting season. Jim would invite me to camp, and I’d never know who might be there. Folks from all over the country … Great times.”

On a note that goes beyond fieldwork, Stewart has always understood the importance of public relations and marketing as far as wildlife conservation is concerned, saying, “If people don’t understand the why’s, how’s and needs of management, there will be no social value for the species and habitat … All is doomed, and no great partnerships are forged.”

Eichinger says that’s the kind of attitude that will keep Stewart involved in conservation. “He’s going to want to remain engaged because he’s passionate about the work.”

Eichinger’s got another reason he hopes Stewart doesn’t just swing into the saddle and ride off into the sunset.

“When I first started, Al took a personal interest in my career. He was welcoming, open and thoughtful. I’ve always appreciated the fact that he’s been a colleague and a friend. Now, as the colleague recedes to the background, I hope the friendship will endure.”

So far, Stewart says he has not made any definite retirement plans. He mentions he’d like to do some writing, become more active with the Glassen Foundation and stay involved with natural resource activities. Perhaps do some traveling with his wife, Pat. Reload some 16-, 20- and 28-gauge shells for the upcoming bird seasons.

“At this point, my slate is open.”

He savors the thought before snapping back to reality faced by most fresh retirees.

“First, I have to complete my ‘Honey-Do’ list and clean the garage.”