Rivers are a huge draw for trout and salmon anywhere they enter the Great Lakes. The Grand River is Lake Michigan’s largest tributary and, for that reason, attracts a hodgepodge of salmonids. Whether pumping tepid spring run-off into an icy cold lake or delivering a chemical signature that beacons to salmon and steelhead reproduced in the river’s many tributaries or imprinted after they’ve been planted in the river, the Grand River makes Grand Haven one of the state’s most productive Great Lakes ports.

Few anglers would argue that Grand Haven is the port it used to be. Cutbacks on chinook salmon plants in Lake Michigan by the Michigan Department of Natural Resources have impacted salmon fishing everywhere, but maybe no more than Grand Haven.

Lake trout are a given at Grand Haven for both the charter boats and sport fishermen. The relatively flat contours of Lake Michigan off Grand Haven team with lakers year-round and are a reliable resource to fall back on when salmon are scarce.

The incredible spring fishery that Grand Haven enjoyed is no more, but the mighty flow of the Grand River does still attract salmonids. The combat fishing near the pier heads that commences around Labor Day is a pale facsimile of what it used to be. There’s some hope that increased numbers of cohos will pick up some of the slack.

Steelheads still show up in coolers, and the fishery below the 6th Street Dam in Grand Rapids is still decent. “Steelhead stocking has remained relatively consistent over time,” said Gunderman. “Our annual stocking targets for yearling steelhead in the Grand River and tributary streams are as follows. We also see natural recruitment of steelhead in many tributaries to the Grand River.”

Natural reproduction contributes a fair number of fish to the Grand River system. Like the Rouge River, tributaries, Fish Creek, and the Flat River produce an assortment of chinook, winter- and summer-run steelhead. The problem is that the smolts have to avoid a gauntlet of predators; including bass, walleye, pike and dogfish, to name just a few; as they make their way down the Grand River to Lake Michigan. A relatively small number make it. 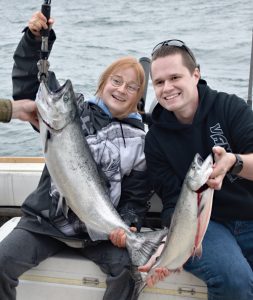 Chad Servello has run a boat out of Grand Haven for more than 15 years and can be found on his 31-foot Tiara Recon on weekends and a couple of evenings a week. Servello was quick to point out that fishing out of Grand Haven is not like it used to be but added that he had an evening recently where kings weighing 29, 27, and 22 pounds hit the deck. “It’s definitely an evolving fishery,” said Servello. “You need to work harder to catch fish these days, but for the most part, they’ve been bigger.” Servello said the big kings he boxed probably were not fish planted or reproduced in the Grand River. Likely they were stays from ports farther north.

“The problem with Grand Haven is there’s no structure,” said Servello. “It’s just a gradually tapering sand bottom. When the lake flips and you get cold 42-degree water next to 70-degree river water, you have combat fishing along the dirty water edge. Labor Day used to mark some crazy fishing, but it died after the plants were cut. You’re better off heading out to look for three-year-olds and other fish now. Skamania fishing can be good in the summer.”

The burgeoning coho fishery that spring anglers rely on at Grand Haven never developed in 2019. “We had such a cold spring I don’t think the fishery ever developed.” Servello admitted he didn’t get a chance to fish this past spring because he was making major boat repairs, but anglers who did say cohos were scarce. This was after a phenomenal spring and fall fishery in 2017 and 2018.

Servello said that fishing commences off Grand Haven as soon as the ice goes off Lake Michigan. Anglers in boats of all sizes target the beach from Grand Haven south to Port Sheldon for a mixed bag of brown trout, Coho, and lake trout beginning in April. “I didn’t get to fish browns because of the weather this past spring and boat issues, but last year fishing for browns was exceptional,” said Servello.

In May and June, anglers have success over depths from 150 to 200 feet. “There’s no particular direction,” admitted Servello, “You just hunt warm water. Key in the spring is finding 45 to 47-degree water. Spot your lures in the top 40 feet using short cores and divers, and you usually catch a mixed bag. May is probably the best month for variety. You can use any color spoon as long as it’s orange!”

While anglers rely on GPS rather than landmarks, visual cues to the south include Brucker Street, Rosy Mound, Twin Sisters, the Pumping Station, Port Sheldon, and the Pigeon River. To the north, look for the Harbor Island stack, Hoffmaster State Park, Mt. Garfield, the Black Creek Outlet, and Mona Lake. About the only structure you’re going to find off Grand Haven is a hole some refer to as The Trench located just to the southwest of the harbor. The rocky bottom there, between 60 and 72 feet, attracts baitfish and perch. Salmonids show up there when the baitfish arrive.

Last spring was one for the record books. Cold, wet weather persisted into June, and the fishing suffered. But some fishing is better than no fishing, we reasoned when I joined Servello on a late June trip out of Grand Haven. The surface temperature was still barely 55 degrees, which was much colder than it typically would be at that time of year. We didn’t expect to load the cooler, but we were hopeful that we could get French foreign exchange student Camille Jambou her first salmon.

I sat back under the canopy enjoying Servello’s newly installed heater with Jambou and Joe Birdsall as we watched the crew set lines. An array of boards, divers and ’riggers were deployed at various depths not knowing where the fish might be. Reports said there were a few scattered fish straight out of the harbor.

Close to two hours went by without a bite as we huddled under the canopy. A misty rain began to filter down, and I swear if you stepped out on the back deck, you could see your breath.

We were all in a state of semi-daydream when it happened. A wire diver started to rip, and it was obvious it was a substantial fish. Servello thrust the rod into Jambou’s stomach and started giving instructions on how to reel. There was no reeling at first. The silvery kings peeled off line headed for Wisconsin. After a brief tug-of-war, the king did it again. All Jambou could do was grin. Eventually, the salmon stopped, and Jambou started the process of regaining line.

No one was paying much attention when the corner rigger at 30 feet started jabbing the surface. Servello grabbed the rod and handed it to Birdsall. Double! No one was complaining about the cold now.

Birdsall’s 4-pound king made it to the boat long before we even saw Jambou’s salmon. The battle lasted a good 15 minutes before Servello was able to scoop up the muscular 15-pound silvery king. High fives celebrated the event. Two more salmon joined the others in the cooler before we decided to head home.

It was an inkling of what the old Grand Haven use to be.

Things to do in Grand Haven

A major event at Grand Haven, the Coast Guard Festival, takes place in August. The port is abuzz with activity, tourists, and anglers. You either embrace it or vacate.

The things to do in Grand Haven are mindboggling. The biggest attraction is Lake Michigan itself, whether it’s fishing, lying on the beach, or walking the pier to get a sunset view of the lighthouse.

The musical fountain is a Grand Haven hallmark with its synchronized display of water, lights and music. The 2-1/2 mile boardwalk leads from the lighthouse, along the harbor, to Chinook Pier, shops and restaurants. It’s a great place for a brisk morning stroll or a leisurely stroll. The Harbor Trolley operates from Memorial Day to Labor Day and is a great way to experience the history and culture of the area. Grand Haven area parks offer everything from hiking on towering dunes, strolling sugar sand beaches to exploring trails through dense forests.

For more information on Grand Haven, visit https://www.michigan.org/city/grand-haven or https://visitgrandhaven.com/.