Not with my ducklings, you don’t!

There are no good guys, and there are no bad guys in the world of nature, but there are moments of confusing, rapid-fire drama when species interact. Sometimes those moments occur so rapidly the encounter is best captured by a camera, not the human eye. Only then can the event be deciphered with any degree of accuracy. Such was the case early last month as I leisurely strolled along the shoreline of South Manitou Island’s Crescent Bay and suddenly witnessed an epic battle.

To set the story-telling stage, a bit of background information is in order. South Manitou Island is a 5,280-acre wilderness island 16 miles west of Leland, Michigan, part of Sleeping Bear Dunes National Lakeshore. The island has a rich natural and nautical history with chilling tales of tragedies, shipwrecks, hardships, and endless human determination. When the Erie Canal was completed in 1826, the island took on a new importance, and Crescent Bay, its deep natural harbor, offered refuge from storms for sailing ships and steamers that navigated the Manitou Passage. Its strategic location between Chicago and the Straits of Mackinac made it the best location for steamers to take on firewood for their boilers as they navigated the 300-mile length of Lake Michigan.

The island has towering sand dunes, pristine shores, snowshoe hares, coyotes, impressively large eastern hognose snakes, giant cedars, ghost forests, ghost towns, and tales of ghosts that allegedly haunt the 1871 lighthouse that towers over the Manitou Passage. As for ghosts, I have yet to meet one even though I have spent a total of seven months over a five-year period on the island as a lighthouse keeper for the National Park Service and have climbed the 117 iron steps well over a thousand times to reach the catwalk. 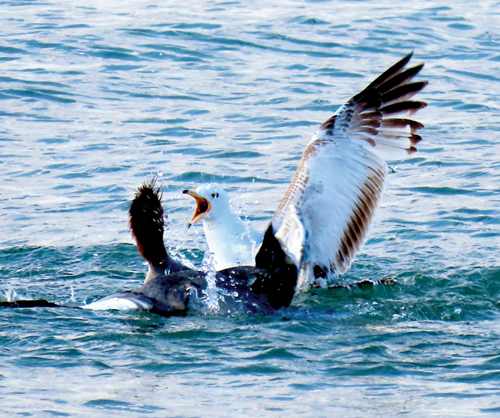 The author assumed the island’s gulls and mergansers to be friendly casual acquaintances that always coexisted in peace. He was wrong.

It was from my viewpoint on that historic catwalk where my tale of “Not with my ducklings you don’t!” really begins. That’s where I first met the cast of characters. Until my first tour of duty on the island, I was unaware of the diversity of wildlife, waterfowl, and songbirds on the island. I would occasionally see a coyote hunting for herring gull eggs on the breakwall that protects the lighthouse. And in the dawn’s early light, I would take delight in watching common mergansers paddling the shoreline with their ducklings that occasionally dove underwater with mom for a fishing lesson.

I knew little about the behavioral patterns of herring gulls and next to nothing about the natural history of the common merganser until my tours of duty on the island were well underway. At times, I would see the two species perched side by side on the roof and chimney of the 1858 lighthouse keeper’s quarters. Based on that observation, I assumed the island’s gulls and mergansers to be “best friends forever” or at the least friendly casual acquaintances that always coexisted in peace. I was wrong.

As I walked along the shoreline on the day of the battle, my camera was ready to go. It usually is. I intended to photograph fresh coyote tracks in the moist sand and then capture the sunset. I paused for a moment about 30 feet from the shoreline to watch a common merganser paddling along on the calm waters with about a dozen of her ducklings in tow. A few ducklings rode on her back, the rest of the brood paddled placidly behind her.

I thought it would be a great photo, so I raised my camera and changed the setting to automatic. “In every walk with nature one receives far more than he seeks” is one of my favorite John Muir quotes, and seconds later, his words rang true. Just as I was zooming in on the merganser family for the photo, a herring gull dove downwards and hit the water barely five feet from mom merganser and her back-riding brood.

To get right to the point, all hell broke loose.

Herring gulls are opportunist hunters and feed on almost anything that can fit in their mouths, dead or alive. From the catwalk, I often witnessed their characteristic plunge-dives in pursuit of minnows and small fish. I will never know the intent of that particular power-dive near the merganser family. Perhaps it was just a flash of minnows that caught the gull’s eye, but more likely, “an easy meal” might have been the gull’s thought process as a few merganser ducklings separated from the brood. What I do know is the mom merganser’s instantaneous response clearly meant, “Not with my ducklings, you don’t!”

I clicked away with my camera at the explosive commotion of the epic battle faster than my brain could decipher what I was witnessing amidst the splashing and flailing of wings. She attacked with a ferocity I did not clearly see until reviewing the images I had captured in an auto-burst mode as her brood scattered.

I suspect the gull regretted its action. In some images, the merganser had her bill on the gull’s neck, and at times the combatants both went underwater. When they surfaced, the gull’s expression seemed to show what I will describe as panic as it tried to escape the merganser. It was all over in about 30 seconds when the merganser suddenly released her grasp and paddling calmly back to her scattered brood as the defeated gull struggled in the water for a moment before swimming away with assistance of its wings in a fashion very unbecoming to a gull. The gull then rested for a short time on the surface before lumbering into flight in the other direction. I suspect merganser ducklings will no longer be on its entrée list.