Ludington Michigan. On August 7, 2021, a 19-year-old angler, Luis Martinez of Ortonville, caught a huge 47.86-pound Chinook salmon. But not only is the whopper a new State Record, but it will go down in the history books as a new Great Lakes Record too.

Martinez was fishing aboard Icebreaker Charters near Big Sable Point on Lake Michigan, a popular salmon fishing hot spot found seven miles north of Ludington harbor. The area has a tradition of producing excellent catches due to structure, severe underwater currents, and a congregation point for masses of baitfish and salmon. It was early morning as Captain Bobby Sullivan set lines in 200 feet of water outside the main trolling fleet. When a rod went off at 7 a.m., Sullivan could tell it was a big fish because it burned 350 feet of line off the Okuma reel drag like a runaway freight train. Line burned off the reel as the monster Chinook put up a great battle, customary for brute kings. 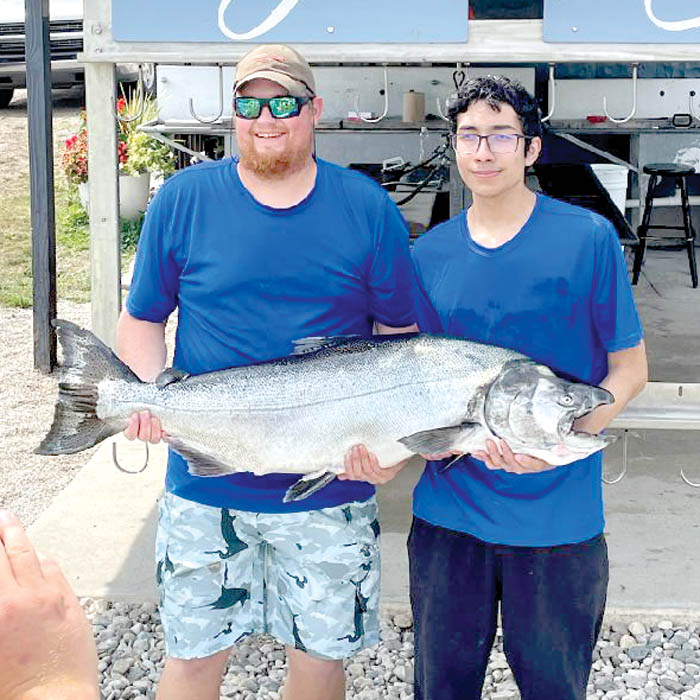 Luis Martinez, 19, of Ortonville (rt), caught this huge 47.86-pound Chinook salmon on August 7, and not only is the whopper a new State Record, but it is also a new Great Lakes Record. Louis was chartering with Captain Bobby Sullivan (lt) of Icebreaker Charters.

“The first 10 minutes was an outstanding fight,” Martinez said. Around 20 minutes into the battle, the monster king came to the surface, and the crew was in awe of its huge dorsal fin sticking above the water like a Great White shark. “That’s when he started jumping out of the water, and my heart skipped a beat,” reported Martinez.

After a long battle, Martinez eased the prize board side. “I knew it was a record fish the instant I set eyes on the 47.5-inch silver flanks and struggled to fit the goliath king in the net,” reported Captain Sullivan. “I screamed my head off when I got a close-up look at the huge king,” said Sullivan. Martinez was in a state of shock at the sight of the huge silvery prize as the captain swung the record fish aboard, and everyone went bonkers, screaming, yelling, and dancing on the boat deck like overexcited school kids after winning state finals competition.

Martinez, a first-time salmon angler, wasn’t quite sure what to think about the colossal fish and all the exciting craziness as the Icebreaker raced to dock side to weigh the huge prize. A crowd gathered outside Captain Chuck’s II in Ludington as Sullivan, Martinez and his family placed the huge fish on the scales, and it recorded the weight at 47.86 pounds. The crowd went bonkers, taking videos, snapping photos amid the loud cheers. Martinez was surrounded by happy fishermen congratulating him on catching the biggest Chinook salmon anyone had ever seen.

After the official weigh-in at Northside Market certified scales, the DNR Lake Michigan Basin Coordinator, Jay Wesley, reviewed the paperwork and announced the huge Chinook as the new Michigan State Record with an official weight of 47.86 pounds.

But wait, there is more good news. It could easily be the largest king ever caught in the entire Great Lakes, beating out a Lake Ontario record 46.38 pounds, 47-inch super king. Truth is, Lake Michigan has been on fire with record fish this year. Illinois set a new state record with a 39.11-pound lake trout; Wisconsin has several over 30 pounds, with one fish tipping the scales at 39.7 pounds and a Muskegon fish weighed 39.2 pounds.

Anglers are asking what’s the reason for these record fish?

The answer is simple yet complex. First, Great Lakes levels are at an all-time high, and heavy runoff and streamflow have pushed enriching elements into Lake Michigan, thus causing algae to bloom and the biomass skyrocketed. This, in turn, provided food for baitfish, and out of the blue, sportsmen started seeing masses of alewife schools and beer belly silver fish coming to the net. It is my opinion the sudden rise has everything to do with an abundance of forage fishes.

Further, Wisconsin has been increasing salmon stocking, and they release large smolts into Lake Michigan, while Michigan has not stocked Chinook at Ludington since 2016, and their average smolt stocked is 3.4 inches. Not all stocked salmon remain at planting locations. They roam the vast freshwater sea and eventually end up along Michigan’s coast with abundant alewife populations, structure, and large rivers with strong river flowages. My last trip to Ludington produced hefty catches. There were millions of alewives, masses of bait all along the shore for miles; big ones to 6-inch size, ideal for spawning next spring.

August 8 was the first time Martinez went salmon fishing, and he was joined by his family, mom Maria, stepdad David Lemaster and sister Ale Martinez. “I love salmon fishing and go every year,” reports Maria, “but this year Ale, David, and Luis decided to join me.”

It was a great decision for Luis. “I wanted to try something new,” said Louis. But little did he know he would get more than what he bargained for with a truckload full of excitement and immediate media attention. The Martinez monster smashed the pre-existing Michigan Chinook salmon set in 1978 by a Grand River, Kent County angler who snagged the trophy 46.06 pounds, 43.5-inch king.

What tackle was used to catch the new record? First and foremost, the giant smacked a Moonshine magnum spoon called Raspberry Carbon. Moonshine has taken the front seat in the spoon industry, producing impressive king catches due to lure action, weight, color, and most importantly, they glow in the dark. Hefty king catches frequently come during low light when kings go on a feeding spree. Lake Michigan anglers target big salmon in the pre-dawn darkness or after sunset using Moonshine with their new RV Series and fish-attracting color designs. Sullivan was running 350-foot weighted steel line with 60-pound braided super line backing and 30-pound monofilament leader. The big fish was caught on an Okuma brand rod and reel. Sullivan estimated the lure was running at about 60 feet deep in 200 feet of water near Big Sable Point. Sullivan is in his fifth year as a charter captain, and he also fishes walleyes on Saginaw Bay. He trolls from a 28.5-foot Baja Cruiser.

Word spread quickly by cell phone regarding the record fish, and crowds came to sneak a peek of the big hog. Cell phones recorded the event. Videos were taken, and the parking lot at Captain Chuck’s was packed with vehicles at lightning speed. Who would have thought a new Great Lakes record salmon over 47 pounds would be caught off Ludington? The Martinez family was looking forward to a relaxing fishing trip but instead got caught up in the hysteria of catching a World-Class huge fish. Congrats to all; job well done.