Small thoughts on ‘Finesse for Bass’ 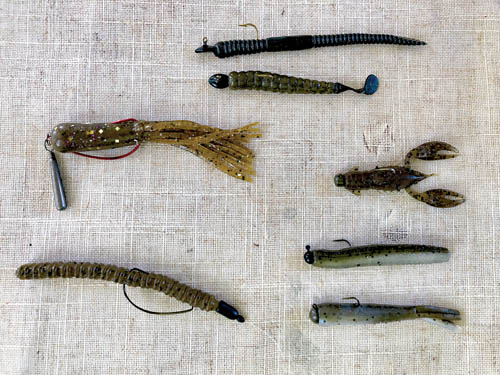 As we head into fall, throwing small baits on light line can catch more bass than anything else in your arsenal. Not always, but pretty often.

Also, as we prepare for the autumnal season that most outdoorsmen say is their favorite time of year with its many fishing and hunting opportunities, I’m way behind my goal of completing a book about finesse bass fishing in time to sell some for Christmas presents. One of the reasons the book is mostly rolling around in my head is because I can’t quite define “finesse” when it comes to bass fishing.

They say opinions are like elbows—most folks have a couple of them. And when it comes to defining just what constitutes “finesse bass fishing,” opinions run the gamut.

For instance, I once edited a story written by a tournament angler who said fishing a 1/2-ounce, rubber-skirted jig with a plastic trailer on 12-pound test line qualified as finesse fishing as long as you worked it slowly. He suggested using a baitcasting reel with a low retrieve ratio to slow down the presentation.

Then a recent article in this magazine said working plastic worms without much weight was finesse fishing for bass.

Heck, a while back, I wrote a story about “finesse fishing,” a 12-inch worm with a tiny weight through weeds and catching big bass.

On the other hand, if you talk to Ned Kehde (the last name pronounced KAY-dee), the OG Ned in Ned rigs, he’ll tell you about “Midwest Finesse,” which mostly means small soft plastics on open-hook jig heads that weigh 1/16-ounce or less.

Before Midwest Finesse got the spotlight, a California pro angler and tackle marketeer named Don Iovino preached the effectiveness of small soft plastics and jigs on light line. “Finesse is for when bass doesn’t want a full meal but just want a snack,” he told a group of Chicago anglers one February afternoon at a seminar I attended back in the 1990s.

So, before we talk about fall finesse tactics, let me throw an elbow (opinion) out there about the two things that make up finesse fishing, and boldly state that to be finesse fishing, you have to be doing at least one of them.

First, finesse fishing means light line—10-pound test or less—and/or small lures. Second, when finesse fishing, you try to make your artificial lure act like healthy bait going about its daily business, trying hard to not draw attention to itself.

Light line and small lures are indisputably finesse fishing. With the little stuff, you can add a brass sinker and a glass bead and rattle the heck out of the presentation, and as long as your lure is soft plastic and 4 inches long or less, you are finesse fishing. If you’re drop-shotting with a lure that’s 6 inches long and using light line, that’s finesse-y, too. If you drag a 1/4-ounce or lighter rubber-skirt jig on 10-pound or less, that’s finesse fishing. So is Texas-rigging a 4-inch Zoom Centipede with a 1/8-ounce sinker on lighter line.

The other finesse factor, making your lure appear as natural as possible, has more gray area when categorizing whatever type of hardware you throw into the water as “finesse.” The late Charlie Brewer came up with the whole Slider system of fishing for bass back in the 1960s and also wrote possibly the best book ever for guys who like fishing light line and small lures.

In “Charlie Brewer on Slider Fishin’,” Brewer explained how watching baitfish in clear Tennessee waters showed him that they rarely did anything that would draw attention to themselves. The theory goes that while many—if not most—popular bass presentations try to make some kind of commotion to draw the bass’s attention, most of what a bass eats is doing the opposite. It’s moving as stealthily as possible, doing its best to NOT draw attention to itself. Brewer’s whole “do-nothing” system of “polishing rocks” meant presenting a light jighead and a straight-tail worm slow and steady along the bottom. He advised using short rods and a small spinning reel, with either 4- or 6-pound monofilament line (remember the book was written before braid or fluorocarbon was on the angling horizon). The short rod, Brewer said, helped the angler keep the tip perfectly still while he slowly reeled. The small reel picked up line slower than larger spinning reels, which helped glide (slide) the lure along the bottom. No twitching, no shaking; just cast that lure out, let it settle to the bottom, or count it down, so it was really close and start reeling, slowly enough that you didn’t bring the lure closer to the surface. That’s really slow when you’re using a 1/8-ounce or lighter jighead. Incidentally, the original Slider jigheads are flat and spear-shaped, which might help them plane a bit downward as you reel.

Let’s talk about a few of the best finesse presentations you can tie on for fall fishing. We’ll start with the Charlie Brewer Slider Worm on a Slider head. A good backup lure is the Slider Grub, which is a 3-inch, boot-tail swimbait that fits perfectly with Slider heads. The Slider Grub is easier to fish, in my opinion, as it has some built-in attraction with its wiggly tail. You don’t need to “polish rocks” with it; fish will come up a way to eat it.

Second, while lots of smallmouth and largemouth move up on flats to feed as waters cool and bait seems to amass around weed clumps, try showing them a little crawfish imitation. My favorite is the Z-Man TRD CrawZ, a two-inch, nearly indestructible dynamo that flat out gets bit when you drag or scoot it along bottom in shallow water. While lots of small, soft plastic crawfish imitators are out there, the nice thing about the CrawZ is it’s made of amazingly durable ElaZtech, which means panfish can’t easily peck off one of the claws. It also means you can spend most of your time fishing and very little time skewering a fresh soft plastic bait on your jighead. Fish just don’t ruin it. I like pairing this with a 1/15-ounce ShroomZ head or a 1/16-ounce OG Mushroom Head. You can lift-and-fall this little guy along the bottom, scoot it with twitches of your rod tip on semi-slack line or swim it.

Another good one for falling water temperatures when you want to give a prolonged presentation in weeds is a Texas-rigged Zoom Centipede. Why bass eat this French fry-looking piece of plastic with a 1/8-ounce bullet weight in front of it is anyone’s guess. They just do. You can throw this right into thick weeds and work it slowly back to you.

Of course, a Z-Man Finesse TRD or slightly fancier TicklerZ with its four wiggly tails are great in the fall, looking a lot like a minnow when you swim them; a lot like a crayfish when you drag them.

Finally, one last finesse-y presentation worth revisiting for fall is the Jika or Zeeka rig with a worm or (even better) a tube lure. The Zeeka is basically a worm hook attached to a drop-shot weight via a split ring. You just cast it out and drag it on the bottom. While worms are great, tubes can sometimes be better since they mimic both baitfish and crawfish, giving bigger fish a crack at what looks like a more satisfying meal.

Finesse and fall go well together. This fall, as water temps cool and bass start eating like crazy, tie on whatever you consider to be a finesse presentation. Chances are good that it will catch you a lot of bass (pike, crappies, and walleyes, too) right up until the lakes freeze.